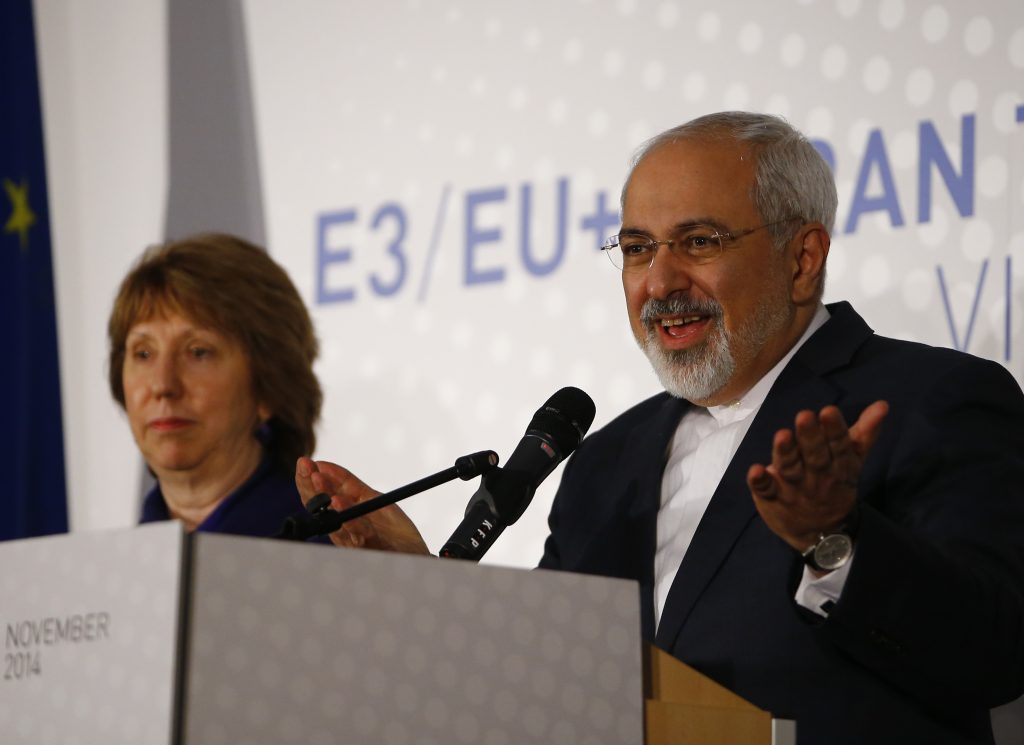 Iranian Foreign Minister Javad Zarif, right, talks to journalists along with EU envoy Catherine Ashton after Iran and six other nations missed their November 24 deadline for a deal to resolve their twelve-year-old dispute over Iran’s nuclear program. The negotiators gave themselves seven more months, until June 2015, to complete a deal aimed at preventing Iran from building nuclear weapons and lifting international sanctions on its economy. (Reuters/Leonhard Foeger)

Atlantic Council’s Matthew Kroenig on the Extension of Nonproliferation Talks

As Iran and six other nations announced a seven-month extension of their effort to reach a deal to limit the Iranian nuclear program, the Atlantic Council’s Matthew Kroenig said Iran will pose a nonproliferation threat even if a deal is struck.

Kroenig, a nonresident senior fellow with the Brent Scowcroft Center on International Security, said the US and its allies must increase their pressure on Tehran to reach an agreement, but that a deal along the lines of the current negotiation will not be comprehensive. In an interview, Kroenig also discussed his brief—Mitigating the Security Risks Posed by a Near-Nuclear Iran—issued by the Council last week.

Q. What are your thoughts on the decision by the P5+1 (the five permanent members of the UN Security Council, plus Germany) and Iran to extend their deadline to reach a deal on Iran’s nuclear program?

An extension might be better than the negotiations breaking down altogether, but the problem is not insufficient time—the negotiators have been at it for one year. The problem is that Iran’s Supreme Leader [Ayatollah Ali Khamenei] is not yet ready to make the necessary concessions. What is needed, therefore, are additional measures to increase the pressure on Tehran and convince Iran’s leaders to make a difficult decision.

Q. What would a good deal—and one that Congress could support—look like?
Looking back, I think it was a mistake to give in to Iran’s demands for uranium enrichment. Iran does not need to enrich if it only wants a peaceful energy program and there were multiple UN Security Council Resolutions calling on Iran to suspend enrichment. Now that Tehran has already pocketed this concession, I think the best we can hope for is the deal the administration is pursuing, which would extend Iran’s break-out time [the time required if it were to scrap the agreement and begin building nuclear bombs] by a few months.

Q. Some, including Secretary of State John F. Kerry, have suggested that a comprehensive deal would prevent Iran from building nuclear weapons and extend the break-out timeline. Do you agree?

Yes, the deal under consideration would extend Iran’s break-out timeline and prevent Iran from building nuclear weapons. But “comprehensive” nuclear deal is a misnomer because it doesn’t “comprehensively” resolve the issue for either side. It would leave the sanctions architecture in place and only extend Iran’s break out timeline by a few months. So it would buy us a little breathing space, but not much. In fact, it would essentially move Iran’s program back to where it was in about 2011. So, in short, the Iranian nuclear crisis will still be with us even after the striking of a “comprehensive” accord.

Q. You have written that regardless of whether a deal is reached, Iran’s existing nuclear capability will continue to pose serious threats to international security. What are these threats?

Regardless of the outcome of the negotiations, and even if we get a nuclear deal, Iran will remain a threshold nuclear-weapon state. That is, it will have the technical ability to produce nuclear weapons on short order should it decide to do so. This will pose many challenges for global nonproliferation efforts, regional security dynamics, and democracy and human rights inside Iran.

For example, the United States has worked hard for decades to prevent the spread of sensitive nuclear technology, including uranium enrichment technology, to new states, including our closest allies. If we allow enrichment in Iran, de facto or de jure, it will be very difficult to maintain that we trust Tehran with sensitive nuclear technology, but not other countries, including our friends and allies. This pillar of the global nonproliferation regime will inevitably be weakened.

Q. How can these threats be mitigated?

The report recommends steps Washington can take to shore up the global nonproliferation regime, contribute to regional security, and promote open government in Iran, even as we work to keep Tehran from the bomb. There is more detail on each set of recommendations in the report, but, turning back to the above example, I argue that Washington should make it clear that whatever settlement we reach in Iran will not set a new precedent for “peaceful” nuclear energy programs elsewhere. Such language should be worked into the text of any final agreement and privately Washington can communicate that those interested in following Iran’s path in developing an indigenous enrichment capability can expect the exact same treatment Iran received: a decade of diplomatic pressure and isolation, economic sanctions, and threats of military strikes.

Q. There is growing sentiment in Washington that a nuclear deal with Iran will create an opportunity for the US and Iran to work together on regional challenges, such as ISIS, Iraq, Afghanistan, and Syria. Can the US and Iran be partners?

No. Washington and Tehran have a mutual interest in combating ISIS, but that is where the commonalities end. We have very different views for what Iraq and Syria should look like once ISIS is defeated, the nuclear standoff is still a major point of contention, and many in Iran, including the supreme leader, see closer collaboration with the West as a threat to their leadership and model of governance, not an opportunity.