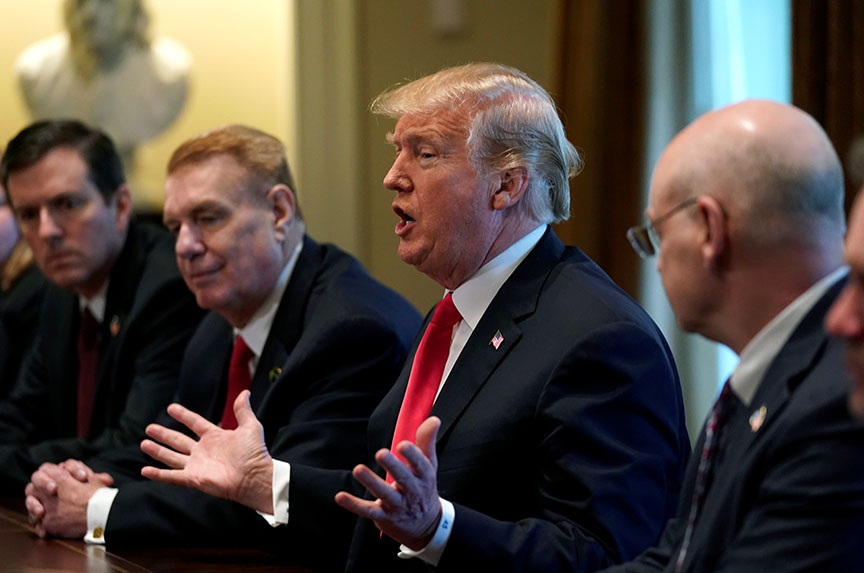 Does US President Donald J. Trump’s startling and widely panned declaration to impose new tariffs on steel and aluminum imports set the stage for the United States’ exit from the World Trade Organization (WTO)?

Jennifer Hillman, a fellow at the Institute of International Economic Law, seems to think so. Trump’s maneuvering indicates that he “would like to create a crisis in the WTO, or…lay the groundwork for the United States to withdraw,” she said.

It is not impossible that, should the WTO level charges against the United States, the Trump administration may respond by saying, “that’s it, we’re leaving,” cautioned Hillman, a former member of the WTO appellate court. She joined a press and members call hosted by the Atlantic Council on March 6.

Trump and has trade advisers have been increasingly skeptical of organizations like the WTO because they believe that they compromise the United States’ sovereignty.

Trump contends that his proposed tariffs—25 percent on steel and 10 percent on aluminum—are designed to protect US national security interests, therefore, the WTO cannot intervene.

He has doubled down on his plan to impose tariffs even as the proposal has been criticized globally and by the president’s own Republican Party colleagues.

Trump has applied “a loose definition of national security” to justify these tariffs, said Grant Aldonas, executive director of the Institute of International Economic Law at Georgetown University Law Center. Consequently, said Aldonas, who served as US under secretary of commerce in the administration of former US President George W. Bush, the tariffs are “pretty clearly unjustifiable under the language of 232.”

What does that mean?

Trump has based the new tariffs on Section 232, a provision within a US law from 1962 that allows for protectionist trade measures if the goods or trade practices in question threaten US national security. According to a report by US Secretary of Commerce Wilbur Ross, they do.

The WTO General Agreement on Trade in Services (GATS) contains a similar provision—Article 21—allowing member nations to break their tariff restrictions if done so in the defense of national security.

Hillman described how Article 21 has been invoked only once, by the United Arab Emirates (UAE), when Qatar brought a complaint to the WTO after the UAE imposed a trade blockade. The case has not yet come to a resolution.

How does that relate to Trump’s tariffs?

Washington has been outspoken in its opinion on the UAE-Qatar case. Hillman said the US stance is: “If Article 21 is invoked, there are no findings to be made by the [WTO] panel.” A claim like this effectively invalidates the WTO, rendering it useless at the mention of Article 21.

Hillman said Trump may plan to pull this trump card, so to speak, if US trade partners—who are not happy with his new safeguards—bring a case against the United States to the WTO. However, this is not a matter of “if” but “when,” according to Hillman. “Many members of the WTO… will challenge the US measure,” she said.

If Trump sticks to his line on Article 21, within the context of the UAE-Qatar case, this would leave the WTO “between a rock and a hard place” and set the tone for the WTO’s response to the new US tariffs, said Hillman.

If it sides with the United States on the current case and concedes to step away from future cases once Article 21 is invoked, the WTO would open the door not only for Trump’s tariffs, but for other nations to adopt safeguards against US trade and call it a measure to protect their own national security interests.

Aldonas cautioned, “there’s a real fear that certain other countries will be willing to use this” justification. With this announcement and justification, Trump runs the risk of other nations “taking a retaliatory posture against the United States under the guise of national security,” said Chris Brummer, a nonresident senior fellow with the Atlantic Council’s Global Business and Economics Program and faculty director of the Institute of International Economic Law.

This would sideline the WTO and pave the way for a trade war.

However, if the WTO ignores the US claim and sets forth a ruling on the UAE-Qatar case, and any future case brought against the United States, Trump may withdraw the United States from the WTO. The US stance on Article 21 and the newly announced tariffs is “putting a lot of pressure on the WTO in a very existential way,” said Hillman.

According to Aldonas, Trump is not the first to toe this line. However, he said, “the difference in this context is that it is difficult to make out any nexus between the [steel] industry and national security.” Though steel and aluminum are used to build hardware used for defense purposes, “you cannot take that small sliver of what the Defense Department does and use it as ground for Article 21,” he said.

How will other countries react?

US trade partners, particularly throughout Europe, have been outspoken in their condemnation of the tariffs and threatened retaliation against US goods. According to Aldonas, when countries enforce such measures, “what it does is hurt something far more important in a connected world, and that is the reliability of the supplier.” By announcing these tariffs, Trump has done just that.

“People will start thinking about alternatives,” cautioned Aldonas, adding: “China will welcome these people.” He described how US neighbors in Latin America have already begun to turn to China and other nations as alternative sources for trade. “This will accelerate that process,” he said.

Further, the fallout from Trump’s tweets “will absolutely lead to some kind of negotiations and every country with a trade interest is going to come in and try to make a deal,” said Michael Gadbaw, a former vice president and senior counsel of General Electric. However, he said, it remains uncertain how different negotiations and agreements would fit together.

According to Gadbaw, the threat to the WTO and multilateral trade gives credence to the Trump administration’s claims that bilateral agreements give them increased leverage. “It does give them a broad field to play on,” he said, adding that “it’s not at all clear how the overall system will respond to that.”

These negotiations will take place while US courts and the WTO navigate the legal dimensions to the proposed tariffs and any formal challenges to the measure. According to the provisions of Section 232, Trump must issue a formal determination of the tariff. He then has fifteen days to publish an official proclamation with all the granular details.

US courts have ruled that within the boundaries of Section 232, national security cannot be conflated with national interest. According to Aldonas, Trump has done just that. Though Section 232 has been leveraged before, he said, “the difference in this context is that it is difficult to make out any nexus between the [steel and aluminum] industries and national security.”

Meanwhile, should other countries bring charges against the United States, the WTO will embark on a four-year process to deliver a ruling. This timeline could be stretched even further because the United States has slowed the process of nominations and confirmations to the WTO’s appellate court. According to Hillman, no nation must legally comply with the ruling of a WTO case until the appeal process is completed. Due to the low staff numbers of the appellate court, there is a backlog of cases.

“The United States may be trying to use that queue to its advantage so it never has to come into compliance,” said Hillman.

Image: US President Donald J. Trump announced that the United States will impose tariffs of 25 percent on steel imports and 10 percent on imported aluminum during a meeting at the White House in Washington on March 1. (Reuters/Kevin Lamarque)