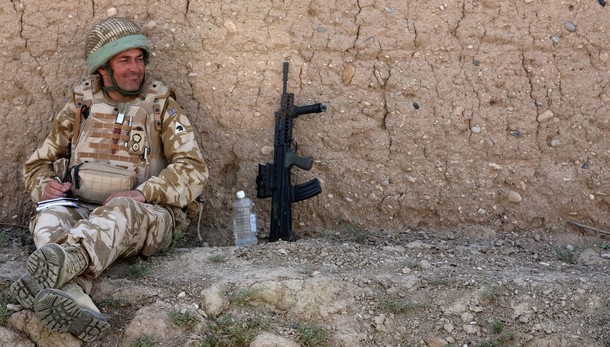 No? That could be a problem.

Yesterday, Richard Holmes wrote this in his tribute to Lt Col Rupert Thorneloe, the 1st Battalion Welsh Guards commanding officer who was killed in Afghanistan on July 1:

We have been so preoccupied with other issues that it is easy to forget that our commitment to Afghanistan has rumbled on since 2001. It has lasted longer than the Second World War. There are currently about 8,000 British troops there, a steady stream of casualties, and every prospect — for this is an obdurate struggle against tough opponents — that the stream will roll on. I discern little evidence of public approval of the war. As Help for Heroes has demonstrated, there is abundant support for the men and women fighting it, and the mismatch worries me, for we may easily persuade ourselves that the best way of helping our heroes is to keep them out of harm’s way.

We all know what Clausewitz thought: passion in war was typically associated with the population. Their engagement allowed societies to endure great hardship in awful industrial conflicts. But then, they would probably be involved in the fighting themselves. To endure the horror of modern war, it was essential that they were passionately engaged: reason didn’t come into it. Chateaubriand hit the nail on the head when he wrote that:

That’s true of modern war, but what about postmodern? How long can you sustain non-existential wars when the much of the population is sceptical or apathetic at best; albeit that it remains well disposed to its small professional armed forces? The answer is, I think, that we don’t really know: we’ve only been here once before in Iraq, and that’s not a hopeful example.

What’s the level of public support for the Afghan war? There’s some worrying evidence. Two thirds in this poll wanted British troops out within a year. In this one, 60% were unconvinced by the government’s case for keeping troops there. In Afghanistan, as it goes, support is holding up rather better.

It’s easy to blame politicians – why can’t they explain the strategy better? Why can’t they resource the strategy better? Why haven’t they got a better strategy? ‘I don’t know why we’re there,’ is a familiar public refrain. But the reasons are plain enough – to tackle extremism that threatens us, to build a better society for Afghans, to maintain our alliance with the United States and the vitality of NATO. The problem is not that there are no reasons, but that the reasons do not resonate with the public – they are not passionate, they are not involved.

Commanders have been disfranchised from the equipment procurement process, which remains in the hands of civil servants and ministers. However, these are not the people who have signed up to the unlimited liability of serving their country in combat. They are not the ones who zip young soldiers into body bags or give evidence to coroners in front of their families.

It’s difficult to draw wider conclusions from these few examples – though that won’t stop people trying. And it’s difficult to gauge the mood of the army from the outside. My own perception is that the army’s field officers remain confident, focused and realistic: in a word, professional. They signed up for operations, and are enthusiastic about going on them, on the whole. But that must remain an anecdotal conclusion, and tentative for it.

Questions remain though: without obvious public enthusiasm for the war, with continuing casualties, and with further articles like Little’s likely – what happens to morale in the army and, more significantly, what happens to Britain’s role there?

What happens when a nation fights a long war without popular passion?

Here, meanwhile, are Tootal’s thoughts on British societal attitudes to war and the military. The whole interview is worth a listen, but this question is at 16.37:

Dr. Kenneth Payne is a lecturer at the Department of War Studies, King’s College London.  This essay originally appeared at the Kings of War blog. Undated  Ministry of Defense photo  of Lieutenant Colonel Rupert Thorneloe.