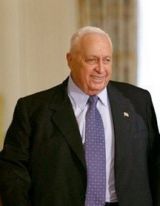 “Written on every page of Israel’s history, in ink and in blood, is the name Ariel Sharon,” notes Michael Oren, Israel’s former ambassador to the United States. Even following Sharon’s death January 11, the former soldier and prime minister “will influence the future, as Israelis consider their options” in the event that US-led diplomacy fails to achieve an Israeli-Palestinian peace accord, Oren writes in a commentary for CNN.

Sharon captured the attention and imagination of Israelis as a warrior. He was wounded in the 1948 war that established the State of Israel, and became a legend in the 1973 Yom Kippur war with his strike across the Suez Canal to surround the Egyptian Third Army and the city of Suez. As defense minister a decade later, Sharon led Israel’s invasion of Lebanon, only to be forced out of his post after an Israeli judicial commission assigned him responsibility for having failed to prevent the massacre by Lebanese militiamen of 800 Palestinian civilian refugees.

As a politician, Oren notes, Sharon demonstrated both the pugnacity that earned him the nickname “The Bulldozer,” and a pragmatism that confounded both his supporters and enemies. He championed the construction of Israeli settlements in the West Bank and Gaza, building a reputation as a hardliner opposed to any compromise. But when he saw reason to make peace to Israel’s benefit, Sharon forcibly evicted thousands of those same settlers in order to hand portions of Sinai back to Egypt and the whole of Gaza to the Palestinians.

Prime Minister Sharon remade the landscape of the Israeli-Palestinian conflict with that latter decision. Four months later, he was planning to repeat that act on a bigger scale – a withdrawal from much of the West Bank – when a stroke cut him down, leaving him comatose.

More than eight years later, the Obama administration and Secretary of State John Kerry are struggling through another effort to bring peace by creating a Palestinian state alongside Israel. If they cannot, according to Oren, it is Sharon’s example of unilateral action that likely will resonate for his compatriots.

“One solution could be a unilateral Israeli withdrawal from Palestinian population centers in the West Bank,” Oren writes. “As in the disengagement from Gaza, the United States would endorse this move, but unlike in Gaza, most Israeli settlements would remain within Israel, and Israeli troops would still patrol strategic borders. Of course, the preferable solution is two states for two peoples. But if that proves unattainable, then Israel can still end the occupation of the Palestinians, preserve its security, and perhaps lay new foundations for peace.”