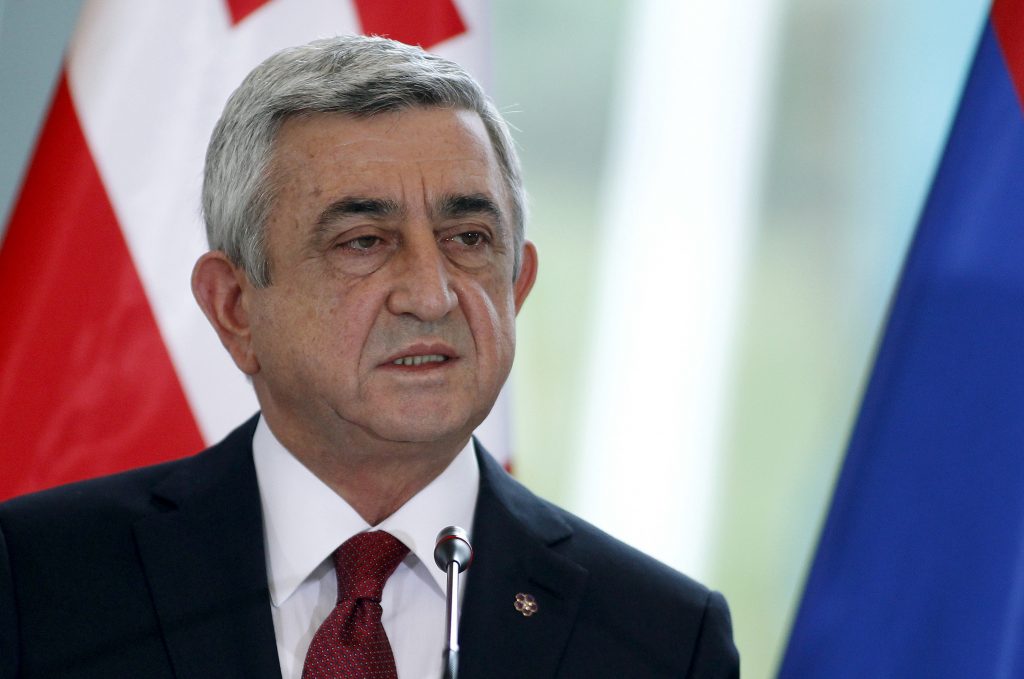 A heavily rigged constitutional referendum that transforms Armenia into a parliamentary form of governance only serves to extend the rule of President Serzh Sargsyan who, nearing the end of his second and final term in office, is more than likely to be appointed Prime Minister.

It is not clear where the vote’s outcome leaves the legitimacy of the Sargsyan regime in the eyes of the Armenian people and its standing in the global family of nations. What is clear is that the massive fraud and vote rigging observed on December 6 will push Armenia further away from the Western world and increase the country’s dependence on Russia as guarantor of security and stability.

The draft amendments to the constitution have been criticized for limiting the rights and political freedoms of citizens, and consolidating too much power in the hands of the ruling party. In addition, by significantly expanding the Prime Minister’s powers, the amended constitution is also seen as a way to extend Sargsyan’s rule beyond his second term in office by allowing him to take on the role of Prime Minister without term limits.

Sargsyan’s Republican Party of Armenia, whose majority hold on parliament is nearly guaranteed under the revised constitution, is expected to select Sargsyan as Prime Minister. Sargsyan’s rule since 2008 has been marred by an unprecedented degree of corruption, nepotism, and poor economic/developmental decision-making.

No stranger to conducting election fraud (most notably during the 2008, 2012, and 2013 elections), the Sargsyan  government still surprised many observers with the tenacity with which it rigged the final tally in the December 6 referendum. Every trick in the book—including ballot stuffing; multiple and carousel voting, a process that involves voting with pre-marked ballots; and intentional miscounting—was used to secure the passage of the amendments with 66.2 percent for and 33.8 percent against, with turnout exceeding 50 percent. Pre-referendum public opinion surveys had shown a majority voting against the referendum, reflecting the regime’s low popularity rating and its failure to convince citizens of the necessity for the referendum. Once confirmed, the revised constitution will take effect on June 1, 2016.

International election observers denounced the electoral proceedings. The Parliamentary Assembly of the Council of Europe criticized the authorities for failing to protect the integrity of the electoral process, citing multiple violations including voter list fraud, vote buying, carousel voting, and illegal use of administrative resources. A joint statement by the European Platform for Democratic Elections, an international civil society network, and Citizen Observer, a group set up by Transparency International’s Armenian Anti-corruption Center, stated that the outcome of the referendum in Armenia cannot be considered legitimate due to the scale of violations. On December 8, the US Embassy in Yerevan said in a statement that “credible allegations of electoral irregularities…need to be fully investigated to ensure that the Armenian people can see the outcome of the referendum as credible and legitimate.”

Contrary to Western observers, the chair of Russia’s Central Electoral Commission, Vladimir Churov, endorsed the elections, noting: “[a]ll procedures are being observed. Everything is calm. We have not seen any violations.”

Local observers stationed at the polls experienced harassment and constant threats. “I was insulted, spat at, hit, threatened to be beaten and killed, thrown out of the station and taken to the police, and threaten by retaliation against family members, while election fraud took place before my own eyes” wrote a young local observer on his Facebook page. Social media was flooded with evidence of ballot stuffing, illegal voting, physical abuse of opposition proxies and journalists, and other serious procedural violations.

Despite these adverse conditions, some local observers managed to stand their ground and physically defend the final vote tally during the counting process, when much of the violations reportedly took place. While assessments are still being finalized, initial results suggest that in those stations where local observers got involved, the constitutional amendments were rejected by a large margin.

The opposition “New Armenia” Public Salvation Front and the “No” campaign headquarters were severely under-resourced and intimidated by the regime. In a classic example of fear mongering, the regime’s media outlets spread rumors that the opposition was linked with an alleged armed group captured by Armenia’s successor of the KGB in Hollywood fashion, days prior to the referendum. Some opposition leaders were regularly called in for questioning by local police in connection with earlier (politically-motivated) cases. In the end, the opposition’s inability to form a unified front and strategy of challenging the expected outcome is seen by some critics as the main explanation for the relatively weak public reaction to the mass fraud and vote rigging that followed the vote count.

In recent years, Armenia’s disenfranchised majority has launched mass protests (the “Electric Yerevan” protest of June 2015 being the latest in the series) to challenge the regime’s grip on power and its poor policy record. However, the odds have so far been against the demonstrators, with the regime regularly getting away with using disproportional force. It is ultimately up to this majority to use the power granted to them by the old constitution to move Armenia away from this disastrous equilibrium characterized by mass migration, widespread poverty, and geopolitical irrelevance. While the Armenian diaspora and Armenia’s Western partners also have a role to play, the window is closing and the country may be approaching a point of no return.

Image: A December 6 referendum that transforms Armenia into a parliamentary form of government is seen as an attempt to extend the rule of President Serzh Sargsyan who, at the end of his second and final term in office, is likely to be appointed Prime Minister. (Reuters/David Mdzinarishvili)