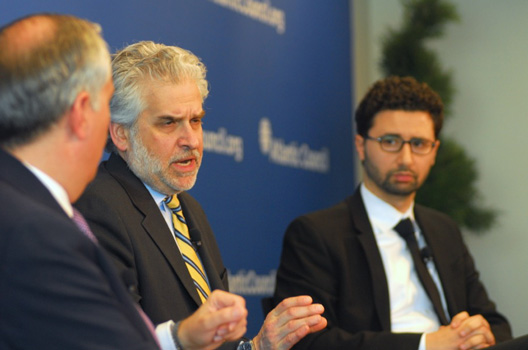 The Pentagon must consider a formal defense treaty with its Arab Gulf allies in light of Iran’s ongoing attempts to destabilize the region politically, according to a new Atlantic Council report.

“While we have very effective forces and a strategy guiding those forces, it’s our sense that there’s enough going on in the world that we risk very significant misalignment in what our forces are doing, and the nature and mix of our forces in the region,” Barry Pavel, Vice President and Director of the Atlantic Council’s Brent Scowcroft Center on International Security, said March 23 at the Atlantic Council.

Pavel spoke at an event to roll out a report he has co-authored with Bilal Y. Saab, Resident Senior Fellow for Middle East Security at the Center.

The report, Artful Balance: Future US Defense Strategy and Force Posture in the Gulf, notes that several factors make a strategic review of US defense strategy in the oil-rich Gulf long overdue. These include:

All these factors—dominated by the possibility of a major deal with Iran to prevent it from acquiring nuclear-weapons capability—“certainly call for a reassessment of US strategy in the region,” Pavel said at a panel discussion moderated by Defense News Editor Vago Muradian.

But encouraging political reform in the region’s smaller, more vulnerable sheikhdoms and emirates is just as important as selling them sophisticated weapons, said Saab.

“There’s a lot the use of force can do to deter the Iranians, but politically stable, internally strong partners can help the United States counter Iran’s destabilizing role in the region,” said Saab. “It’s about time that the US, in conjunction with our partners, take this issue seriously, because for a long time it’s been pretty much ignored.”

He suggested that the massive US military presence in countries like Saudi Arabia, Kuwait, Qatar, and Bahrain are aimed at preventing the Iranians from attacking in the first place—but might very well end up having the opposite effect.

“There are lots of US soldiers in the Gulf, and in some ways that detracts from our counterterrorism objectives,” he said. “The narratives that Osama bin Laden used—he was quite unhappy with the US military presence in Saudi Arabia—should be kept in mind. I’ll be very honest. It might actually exacerbate terrorism. [Over time, opposition to] that kind of preponderant US military presence will become more mainstream, and not just from radical terrorist leaders but within Gulf society itself.”

Looking at individual countries, said Saab, Oman is in a better situation than most of its neighbors in the region, though the big question is what will happen once its 74-year-old leader, Sultan Qaboos bin Said—the longest-serving monarch in the Middle East—dies?

“For that country and others as well, the primary challenges will always be governance and the economy. Oman is definitely facing the challenge of shrinking oil revenues and a growing population,” said Saab. “Bahrain is in the toughest spot politically. Shiites are a majority there, and the government has made it much worse because they have adopted an almost purely security-focused reaction. The UAE and Qatar are better off, but the question of economic diversification applies to them as well.”

Kuwait “has an interesting mix of domestic discontent, but also a healthy dose of political reform,” which Saab said “is a very smart way for the Kuwaiti royal family to ward off instability.”

All these countries, as well as Israel, are watching nervously as the United States and its partners negotiate an accord with Iran that seeks to prevent it from acquiring nuclear weapons.

“In the event of a deal with Iran, the US might seriously consider upgrading these security relations it has with its Gulf partners and go into an actual alliance. With the possible exception of Israel, the US does not have a single ally in the Middle East,” Saab said. “This would be the ultimate reassurance to our partners.”

If such a deal is ultimately signed by Washington and Tehran, most—if not all—of the sanctions on Iran will be lifted, giving the security elements of Iran’s ruling establishment access to more foreign funds.

“Some of these elements are extremely hostile to the US and our Gulf partners, so if there’s a deal, we’d still have a lot to deal with—maybe even more to deal with,” warned Pavel. “And if there’s not a deal, then we’d have other sets of challenges.”

Nevertheless, could a nuclear deal seduce Iran into taking a less confrontational role against its traditional enemies, Israel and the United States?

“It’s not unthinkable, but it’s very unlikely,” Saab replied. “The record speaks for itself. For a very long time, the Iranians have not respected the sovereignty of their neighbors, and have been very active in extending their reach violently.”

Pavel noted the rise of extremist elements within the religious theocracy that rules Iran.

“If there’s a good deal, that might help shore up [President Hassan] Rouhani’s agenda. The Iranian people are extremely pro-Western and could ultimately share more values with the West than with the regime in Iran,” he said. “But let’s not make any mistake. There are extremely strong, hostile elements in the regime that don’t show any sign of going away. They sponsor terrorism on a global basis, they cooperate with North Korea on nuclear weapons, and the list goes on and on.”