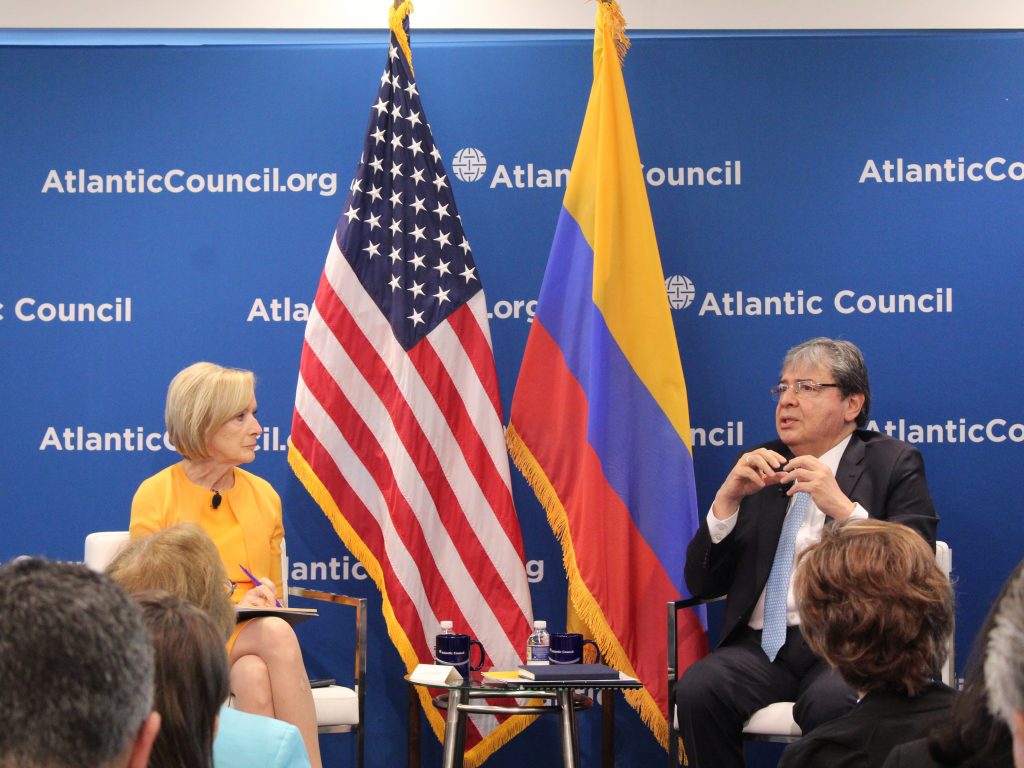 Colombia is not going to change its open-door policy for its neighbor Venezuela, despite the influx of 1.5 million Venezuelans fleeing the economic and political collapse of Nicolás Maduro’s regime, according to Colombian Foreign Minister Carlos Holmes Trujillo.

“The impact is being felt daily in our country,” Trujillo told an Atlantic Council audience on July 16, admitting that the number of arrivals already “goes beyond our capacity.” Despite the strain on his country, he underscored Colombia’s commitment to accept Venezuelan refugees, promising that this policy “is not going to change. We are receiving Venezuelans with a sense of solidarity, with a humanitarian attitude, and with a sense of historical gratitude.” He explained that it would be impossible to “decide how many Venezuelans can come inside Colombia,” due to the close connection many in Colombia feel for their Venezuelan neighbors.

An estimated four million Venezuelans have fled the catastrophic economic conditions and political repression under leader Nicolás Maduro, who has clung to power following fraudulent elections in May 2018. Maduro’s economic mismanagement has led to widespread shortages of food and medicine, debilitating inflation, and nearly half of Venezuela’s population is now in poverty. On January 23, National Assembly President Juan Guaidó took the oath of office as interim president, given that Maduro’s inauguration for a second term in January was illegitimate because of the fraudulent elections. Guaidó is now recognized as the legitimate leader of Venezuela by nearly sixty countries, including the United States, Colombia, and many Latin American states.

Despite widespread international support, Guaidó has been unable to take control of the country from Maduro. Guaidó attempted to woo members of the army and security services to  the cause of democracy in “Operation Freedom” on April 30 but was unable to achieve widespread defections. Maduro has also been supported by Russia, which sent nuclear-capable bombers and Russian military advisers to the country.

When Judy Woodruff, anchor and managing editor of the PBS Newshour and the event’s moderator, suggested that removing Maduro has been more difficult than the United States or Colombia may have thought earlier this year, Trujillo maintained that the momentum is still going against Maduro. “We see this as a process,” he explained. “Dictatorships never fall from one day to the other. Dictatorships fall because a series of conditions are created that lead to the end of tyranny,” he argued. “I think we have made a lot of advances politically and diplomatically,” he added, including the recognition of Guaidó and his representatives by nearly sixty countries and many international organizations, and the unity of the political opposition around Guaidó.

“We always believed it was going to be very difficult,” to achieve Maduro’s exit from Venezuela, Trujillo admitted. But the positive developments of the last seven months lead him “to believe that sooner or later the conditions will exist so that democracy can [exist again] Venezuela.”

That transition cannot come soon enough for Colombia, Trujillo said, as his country is already feeling the strain of the mass exodus from their eastern neighbor. While Venezuelans have thus far been received warmly by Colombians, Trujillo warned that support for welcoming the migrants could be waning. “There is no doubt that problems are starting to be present in several regions of the country,” in which regional elections will also soon be held, he explained.

If nothing changes in Venezuela, Trujillo said his government projects that the number of migrants in Colombia could rise to 1.8 million, with a potential to spike to 3 or 3.5 million “if there is a catastrophe.”

Trujillo noted that Colombia is very grateful for the help the United States has provided but added that more could certainly be done, including more money to help provide food to refugees and help Colombia’s strained health and education systems. He pushed other members of the international community to step up their assistance, in order to prevent the migration crisis that is overwhelming Venezuela’s neighbors from becoming a truly global problem.

In addition to attending US Secretary of State Mike Pompeo’s Ministerial to Advance Religious Freedom, Trujillo said his visit to Washington was an opportunity to brief the Trump administration on Colombian President Ivan Duque’s efforts to clamp down on the production of illegal drugs—especially cocaine. On March 29, US President Donald J. Trump criticized Duque as “having done nothing for us,” on curbing the drug trade.

Trujillo pushed back on these comments, explaining that Duque’s predecessor, Juan Manuel Santos, reversed policies that had previously seen the number of hectares used for drug production reach a low of 40,000. When Duque entered office, Trujillo explained that number “went up to a figure that we have never lived through before”—an estimated 200,000 hectares.

Duque is now aiming “first to stabilize the number of hectares and then to try to bring them down,” Trujillo explained, through the use of police raids to stop production, as well as crop substitution and development programs to lower the incentive to grow lucrative drug products. Progress has already been made, he added, as “since the first day of the administration, close to 40,000 hectares have been eradicated…The goal this year is to eradicate 80,000 hectares of illicit drugs.”

Trujillo stressed that his government wants to return to multilateral solutions for combatting the global drug problem, as clamping down on production can only do so much. Other countries need to step up to help fight transportation, money laundering, and consumption, Trujillo argued. “Every country that has to do with any link of the chain has to work very strongly in order to combat it,” he said.

Small Changes to the Peace Accord

Duque’s successful presidential campaign in 2018 focused heavily on the 2016 peace accord signed between the Santos administration and the Revolutionary Armed Forces of Colombia (FARC) in an attempt to end more than five decades of conflict. A narrow majority of Colombians opposed the peace accord in a public referendum in October 2016 over concerns that it was too conciliatory to the FARC and that it was not fair to the victims of FARC violence.

Trujillo argued that the “no” vote on the referendum and the election of Duque—who criticized the deal—means that the Colombian president has a mandate from the Colombian people to achieve “some changes for the future” in a modified deal, which would be accomplished “through political consensus and institutional means.” Trujillo maintained that his government only wants to see a few specific changes to the accord, namely the assurance that drug trafficking, kidnapping, and child sex crimes would be prosecuted normally without the special judicial privileges of the peace process, and that there would be limits on judicial privileges for crimes committed after the agreement was signed, penalties for FARC members who have not declared goods or resources in their possession, and a ban on prosecuted FARC members from representing the party in Congress.

“Those changes are not going to touch the [main] body” of the peace accord, Trujillo argued, but rather would provide the “sustainability and durability in popular support for the agreement,” that it has previously lacked. Achieving real peace in Colombia, he explained, requires genuine buy-in from the Colombian people, which can be achieved by making these important, if minor, changes.