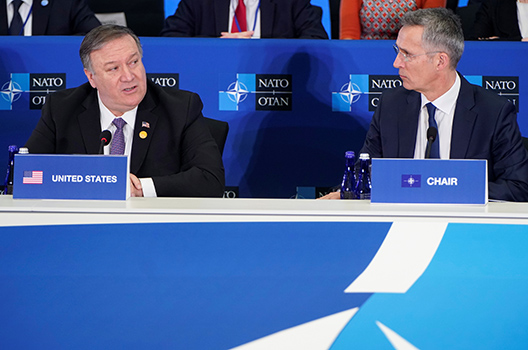 On NATO’s seventieth anniversary on April 4, foreign ministers from the twenty-nine allies, as well as the foreign minister of North Macedonia — soon to be the thirtieth member of the Alliance — met in Washington to discuss the growing threats the Alliance faces and the progress being made to strengthen it for the decades to come.

Before the meeting, NATO Secretary General Jens Stoltenberg said foreign ministers would “reflect on our achievements over these last seven decades, but we will also look to the future.” Speaking to reporters after the meeting, US Secretary of State Mike Pompeo said that the Alliance “took important decisions on urgent problem sets,” including burden sharing, Russia, and Afghanistan.

The level of defense spending among NATO allies has been a constant point of concern for US President Donald J. Trump and his administration and it was a major topic of discussion in Washington this week. At NATO’s Wales Summit in 2014, allies made a commitment to spend at least 2 percent of their gross domestic product on defense by 2024. So far, only seven NATO countries have reached that goal, although all members have increased their spending.

On April 3, US Vice President Mike Pence acknowledged that “more of our allies are now meeting their commitments,” but added that “still others are falling short.” Pence addressed NATO Engages, a daylong conference jointly hosted by the Atlantic Council, the German Marshall Fund of the United States, and the Munich Security Conference.

Pompeo kept up the pressure in comments before the meeting on April 4, saying that “now is not the time to repeat tired excuses that our citizens don’t support increased defense spending or security spending. Each nation has a duty to make the case to our people.”

In a joint statement, NATO foreign ministers maintained that they “remain committed to all three aspects of our 2014 Wales Defense Investment Pledge, including the spending guidelines for 2024, planned capabilities, and contributions to missions and operations. We have made considerable progress but we can, must, and will do more.”

.@SecPompeo at @NATO #ForMin: No alliance can survive without proper investment. Our Allies have joined the United States in recognizing the need for greater burden sharing. Strong spending commitments matter. They lead to political solidarity. pic.twitter.com/xJScpYozqW

After the meeting of foreign ministers, Pompeo reported that burden sharing was discussed and reiterated his call for allies to do more, saying “no alliance can survive without proper investment from all of its partners.”

“Our allies have joined the United States in recognizing the need for greater burden sharing. Each and every one of them,” he added.

The growing threat from Moscow was also a major item on the agenda. According to Stoltenberg, the foreign ministers discussed Russian threats to partners Georgia and Ukraine, as well as the wider Black Sea region, and the implications of Russia’s violation of the Intermediate-Range Nuclear Forces (INF) Treaty.

Stoltenberg maintained that “we all agree that Russia continues to be in violation of the [INF] Treaty,” and the Alliance is now “preparing for a world without the INF Treaty.” He added, however, that it is still “possible for Russia to come back into compliance.” The United States is set to formally withdraw from the Cold War-era pact in August.

The NATO secretary general argued that the Alliance would “not mirror what Russia is doing. We will be measured and coordinated. And we have no intention of deploying ground-launched nuclear missiles in Europe.”

Allies also discussed beefing up their deterrence in the Black Sea region. Stoltenberg reported that allies “agreed to a package of measures to improve our situational awareness and to step up our support for both Georgia and Ukraine.” He explained these measures would include training of maritime forces, port visits and exercises with NATO naval forces, and some information sharing. Stoltenberg also pointed out that “as we speak, one of NATO’s naval standing groups is in the Black Sea and [is] exercising with Georgian naval forces and Ukrainian naval forces.”

Pompeo added that allies also discussed the threats Russia presents in other areas of the world, especially Venezuela. He confirmed that the foreign ministers discussed the reported deployment of Russian troops to Venezuela on March 23. “They need to leave. And we talked about that,” he said, adding “we talked about that in context of Russia’s efforts all around the world.”

Pompeo also updated allies on the progress of peace talks between US Special Representative for Afghanistan Reconciliation Zalmay Khalilzad and the Taliban. The US secretary of state acknowledged the human cost NATO allies have born during the nearly two-decade-long conflict and promised that “the United States will ensure that our collective sacrifices are not wasted and that terrorists can never again threaten us from Afghanistan’s soil.”

Stoltenberg said that NATO supports a peace agreement that “makes sure that Afghanistan doesn’t once again become a safe haven for international terrorists,” but added that “we also strongly believe that the only way to have sustainable peace in Afghanistan is to have Afghan reconciliation.”

The Afghan government has not been an official party to the US-Taliban talks.

Stoltenberg argued that “to have Afghan reconciliation we need the Afghan government to take part. Therefore, the talks that are now taking place are only the first stage.”

He declined to give any specifics about what role NATO forces might place in a post-settlement Afghanistan as that issue “remains to be decided [and] that will be part of the agreement.” He did promise that NATO allies “agree that we will take any decisions on our future presence together.”