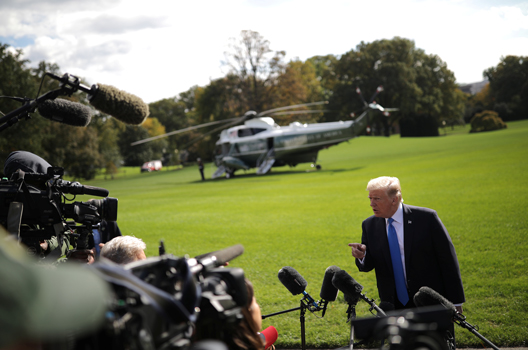 US President Donald J. Trump’s upcoming trip to Asia presents him with an opportunity to articulate his policy toward the region and “dispel the uncertainty about US engagement that has haunted the region since January,” according to a former US official.

“It is about time,” said David Shear, who served as assistant secretary of defense for Asian and Pacific security affairs in the Obama administration, while noting that formulating such a policy will allow Trump to solidify ties with allies in the region and promote US interests on a range of political, security, and economic issues.

Trump leaves for Asia on November 3 on a trip that will include stops in China, Japan, South Korea, the Philippines, and Vietnam.

The trip will give Trump an opportunity to discuss the North Korean nuclear crisis and US regional trade, said Shear, who is currently a senior adviser at McLarty Associates.

He described how Trump’s earliest actions with Asia have been defined by disengagement. Trump, for example, pulled the United States out of the Trans-Pacific Partnership (TPP) free trade deal in January, days after his inauguration. While he has had bilateral meetings with many of his Asian counterparts in Washington, he has not solidified a cohesive approach to Asia as a whole.

On November 10, Trump will address the Asia-Pacific Economic Cooperation (APEC) summit in Danang, Vietnam. In that speech, which presents yet another opportunity, according to Shear, Trump is expected to outline the importance of the region to US policy.

However, “anyone who is expecting there to be some large clarification on the way Trump sees the world and Asia in it” will likely be disappointed, said Leland Miller, a nonresident senior fellow in the Atlantic Council’s Brent Scowcroft Center on International Security. He said that Trump’s trip “will probably be much less substantively interesting than many people suspect or fear.”

Shear and Miller joined Lindsey Ford, deputy director of the Washington office of the Asia Society Policy Institute, and Alexander Vershbow, a distinguished fellow at the Scowcroft Center, for an Atlantic Council phone briefing on November 1 to discuss the significance of Trump’s first trip to Asia as president.

North Korea will be at the top of Trump’s agenda throughout the trip. After a summer of nuclear tests and escalatory rhetoric between Trump and North Korean leader Kim Jong-un, finding a solution to the looming crisis with Pyongyang will feature prominently in Trump’s discussions with regional leaders.

In particular, North Korea will dominate Trump’s meetings with the newly re-elected Chinese President Xi Jinping. Miller described how the prevailing attitude toward China in the US Congress is that the United States needs to take a stronger stance vis-à-vis Xi and insist that Beijing step up to the plate as a regional leader, particularly with regard to moderating its relationship with Pyongyang. Further, Shear said it is likely “that in private the president will have strong words for Xi on the subject of trade.”

Miller said Xi believes he can negotiate a solution to the trade deficit between China and the United States in such a way as will not be too painful for Beijing. However, he added, that is unlikely because Trump “talks about a fundamental reordering of the economic trade relationship.”

Ford warned that Trump needs to walk a fine line in his discussions with Xi. “Trump is coming in with a weaker domestic position while Xi is in the strongest position he has been in a long time,” she said. Xi was re-elected to a second five-year term on October 23. Meanwhile, “we’ve got a pretty cloudy domestic political situation here [in the United States], and believe me,” said Shear, “the region has been watching this.”

Despite the uneven footing between the two leaders, Miller predicted Trump and Xi will find a way to elevate the US-China relationship. However, he expressed concern about miscommunication on major issues, and a breakdown of understanding between Washington and Beijing. “There seems to be a fundamental disconnect between what the Trump administration expects from the China relationship and what Beijing is willing to give up,” said Miller.

However, according to Miller, “the one [thing] that could pull us back from the brink is Beijing solving the North Korea problem.” He added: “Beijing has to solve the problem… not be helpful, but solve the problem.”

The crisis with North Korea will also loom large over Trump’s time in Seoul and meetings with South Korean President Moon Jae-in. Vershbow, a former US ambassador to South Korea, described Seoul’s anxieties surrounding the issue, heightened by the short amount of time Trump will spend in South Korea as compared to China and Japan. He described how the escalating tensions between Washington and Pyongyang have resulted in a situation in which the United States is ready to use force with North Korea, though “the US red line has not been clear.”

Consequently, said Vershbow, “the president will be arriving at a time of real worry in Seoul that the US could launch a preemptive strike without consulting South Korea.” He said Moon is concerned about Trump’s regard for South Korean interests, an issue Trump will need to address in order to assuage an important ally.

“Clearly the stakes for these meetings are very high. Success is by no means assured,” said Vershbow, adding: “Much depends on what is the president’s message.”

Even as North Korea and trade deals “are obviously going to be priority,” said Ford, US allies in Southeast Asia “don’t want these issues to be priority at the exclusion of everything else.” She insisted that Southeast Asia must be part of the broader US strategy in the region.

While “there’s actually been a surprising degree of engagement with Southeast Asia so far,” according to Ford, Trump will not participate in the Association of South East Asian Nations (ASEAN) summit in Manila which will take place just after the conclusion of his trip. This is not necessarily a “death knoll,” said Ford, but it “raises concerns about the administration’s long-term commitment to the region.”

She described how there is a great deal of pressure on Trump to now come up with real deliverables and affirmative initiatives in Southeast Asia, and attend future ASEAN summits. “If it were missed again, it would send a very troubling signal to folks in the region,” said Ford. She recommended that Trump find opportunities for cooperation with Southeast Asian nations in the form of trade deals and coordination on countering violent extremism.

Ultimately, said Ford, “people will want to see reassurance that the United States is still a leader in the region.”

Image: US President Donald Trump talks with reporters as he departs the Oval Office of the White House for Dallas, in Washington DC, US October 25, 2017. (REUTERS/Carlos Barria)