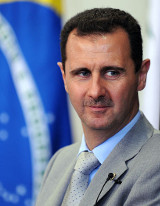 It would certainly be wonderful if Wednesday’s peace conference in Geneva were to result in some kind of blueprint, however fragile, for winding down a Syrian civil war that is now approaching the three-year mark. The carnage has consumed some 130,000 lives — at least half of them civilians — turned 2.4 million Syrians into refugees in neighboring countries and displaced another 6.5 million within Syria itself.

Add to this devastation the children who have lost one or both of their parents, the destruction of essential infrastructure, the outbreak, actual or potential, of multiple diseases and the scarcity of basic necessities, and what’s evident is that Syria is being consumed by catastrophe. Syrians will feel its malign effects for years to come, as will people in adjacent countries, particularly Lebanon and Iraq, where Syria’s sectarian war has aggravated Sunni-Shi’a tensions.

With all of these factors in play, it appears unlikely that a substantive and sustainable resolution will be reached in this week’s “Geneva II” peace talks.

First, there’s a deep divide between the Syrian groups in exile — which claim to be the authentic voice of Syrians and have been recognized as such by many governments — and the most effective fighting forces within Syria. The former are organized as the National Coalition of Syrian Revolutionary and Opposition Forces (aka the Syrian National Coalition, SNC) and have established a provisional government — based in Turkey — as well as a Supreme Military Council. But no matter the rhetoric of the SNC and its backers in Washington and elsewhere, other opposition groups that do not answer to the SNC bear the brunt of the fighting and are therefore more consequential to Syria’s political future.

The pressure the United States has applied on the SNC to join Geneva II has further divided what was already a creaky coalition. When the SNC voted Saturday on whether to participate in the talks, about half of its members refused to vote, voted no or abstained. The dissenters worried, with good reason, that sitting down with Assad’s representatives would further erode their standing within Syria and diminish the likelihood of removing the dictator from power.

Aside from its shallow Syrian roots and outside advocates, the SNC has a shoestring budget and precious little firepower. Last month, the United States ceased even non-lethal military aid over concerns that it might land in the hands of radical Islamists, particularly those linked to al-Qaeda.

The upshot is that the SNC will arrive in Geneva divided and bereft of the money and weaponry needed to shape the battlefield. It won’t have much leverage against Assad.

Meanwhile, Assad’s forces have been making some headway in recent months, even though large chunks of Syria — especially much of the Sunni-majority north and the Kurdish regions in the northeast — remain outside the regime’s control.

Though they have proven to be a thorn in Assad’s side, Syria’s Islamist resistance groups are not monolithic. The Islamic Front — more a disparate ensemble than an organization led by a central leadership — has clashed with the Islamic State of Iraq and the Levant (ISIS) and does not share its transnational agenda. But both organizations, along with Jabhat al-Nusra, an al-Qaeda affiliate, have publicly rejected the authority and aims of the SNC, viewing it as a coalition of expatriates separated from Syria’s reality and beholden to foreign powers.

The IF, ISIS and al-Nusra have spurned the Geneva II negotiations. But their fighters are among the most effective, meaning any agreement reached in Geneva will lack the support and legitimacy of the most powerful resistance groups on the ground.

Assad, for his part, will never succeed in reunifying Syria under his control; the country’s most probable future is, alas, a chaotic, violent, long-term balkanization. Yet he has managed to retain his societal bases of support — which extend beyond his Alawite minority and into portions of the Sunni majority — while managing to reach out to other minorities, such as the Christians and Druze. Those among the non-Alawite communities who have entered into a marriage of convenience with Assad have done so largely out of fear of the radical Islamist opposition, viewing him as the lesser of two evils.

Furthermore, despite a number of defections from the regime, there’s no sign that the ruling Ba’ath Party, the armed forces and the intelligence services are at all prepared to abandon Assad.

Externally, he has the fulsome backing — in money, arms, advisers and combatants — of Iran and its Lebanese Shiite ally, Hezbollah, which has poured its fighters into Syria.

With the battlefield momentum shifting his way, the SNC divided and short on resources and the internal and external opposition split, Assad, despite his many problems, holds a stronger hand than his opponents. With the full support of Tehran and Moscow behind him, it remains unlikely that the Syrian strongman will even consider ceding power — especially not in the opening round of talks.

Given that the United States and Europe are increasingly worried about the strength of Islamist groups in Syria, notably ISIS and al-Nusra, Assad may also be calculating that his political position will improve. He may be right.

Even limited success in Geneva — such as guarantees to permit the distribution of humanitarian aid in war zones and a commitment to keep talking — could end up weakening the SNC further by deepening its internal divisions and widening the gulf between it and the Islamic Front. To establish itself as a consequential player, the SNC must produce a few significant results, but its weaknesses will make that nearly impossible. In the eyes of its critics, it will have supped with the devil and gotten little more than crumbs.

The Syrian people deserve a better outcome from Geneva II, but given the prevailing political and military realities, they’re unlikely to get one.