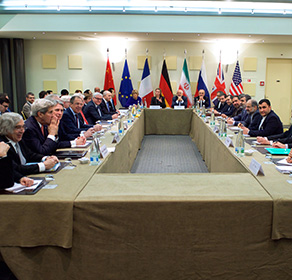 Nuclear agreement will have ‘strategic cost’ for US alliances in the Middle East, says Retired Adm. Stavridis

“I think you are going to see a great deal of strategic cost to the United States in our alliance structures in the region,” Stavridis said at the Atlantic Council July 14.

Evidence of this strain came swiftly in the form of a sharp statement from Israeli Prime Minister Benjamin Netanyahu denouncing the deal as a “historic mistake.” Arab Gulf states, too, are worried that the agreement will tilt the regional balance in Iran’s favor.

While acknowledging the enormous amount of work that has gone into bringing the deal to fruition, Stavridis said he remains skeptical.

“I am, like a lot of people, eagerly awaiting visibility on the text [of the agreement] and in particular on the verification regime that is very central to this,” he said.

Stavridis noted that the deal will provide Iran with a “huge basket of resources” as a result of the lifting of sanctions. And, he added, Iran will continue to pose more than just a regional challenge.

Stavridis, who serves as the Dean of the Fletcher School of Law and Diplomacy at Tufts University, spoke as part of a panel discussion with former National Security Advisor Stephen J. Hadley and Atlantic Council President and CEO Frederick Kempe. Fran Burwell, Vice President and Director of the Atlantic Council’s Program on Transatlantic Relations, moderated the discussion.

Kempe and Stavridis announced an exclusive partnership between the Atlantic Council and the Fletcher School.

In such a situation verification is “terribly important” but it is also “really hard,” he added.

Hadley predicted that there will be plenty of bumps along the road.

“The burden for [implementation] will largely be on the next President” of the United States, he added.

A senior US official said in a background briefing with reporters July 14 that the deal puts the President in a much stronger position because of strict limitations and the type of transparency and verification measures that were not in place before the deal.

“You really don’t know whether it is a bad or a good agreement until you see how it is implemented,” he said, noting that in the past good deals have been terribly implemented.

Kempe noted a potentially positive outcome of the breakthrough: On July 14, US President Barack Obama’s remarks on the nuclear deal were broadcast live on TV sets in Iran.

“That’s a virus in the system,” Kempe said.

“We know through polling that Iranians are actually more pro-American than many people in that whole region. Where does that lead? We actually don’t know, but we can help shape it through more people-to-people exchanges, what the West Germans used to call ‘change through growing closer,’” he added.

Noting that Iran, like the United States, is worried about the Islamic State in Iraq and al-Sham (ISIS) in Syria, Kempe said Tehran may look at Washington as an ally in that fight.

“If they want to take it on, we’re really going to have to talk about that,” he added.

Kempe said the United States needs to reassure its Gulf allies on the nature of the deal with Iran and broaden its engagement with Iran.

“The real question is can we walk and chew gum at the same time? … During the Soviet period we … had nuclear talks, but we also had the Helsinki process, we had human rights talks. The question is can we now shift to more of that kind of approach to the region,” he added.

Greece: A Symptom of What Ails Europe?

Europe, meanwhile, has been preoccupied with the economic crisis in Greece.

On July 13, Greece’s creditors struck a deal that paves the way to negotiations on a third bailout for Greece.

Stavridis described the challenge posed by Greece to the European project as profoundly important to the United States.

“If Greece [crashes out of the Eurozone]—and I think this is still 50-50—then I think you have a Greece that is angry, disaffected, and will become extremely difficult in the councils of Europe,” he said.

To have a member of consensus-driven organizations such as the European Union and NATO that is rebuffed in economic despair “will do nothing but put those organizations in irons,” he added.

Hadley said the situation involving Greece is both a cause as well as a symptom of the problems that Europe faces today.

“There is a crisis of legitimacy in the European project within the European people and that is really the problem they are going to have to come to grips with,” he said.

Kempe pointed out that Europe’s dysfunctions are a strategic threat to the United States.

“We have got dangers on the horizon in Europe. We are looking at Ukraine, we are looking at ISIS, but I really think we also have to take a look at Europe again as well,” he said.