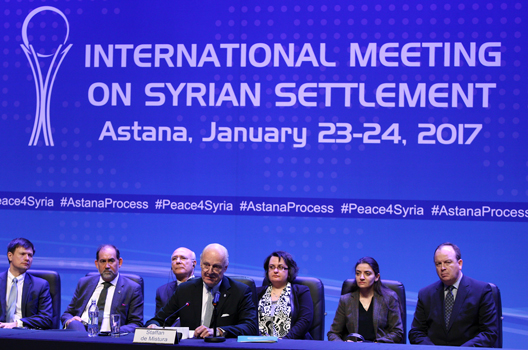 The Syrian peace talks in Astana, Kazakhstan, consecrate Russia’s primacy in Syria, launched with its entrance into the conflict in 2015, and extended with its ability now to convene peace talks and dictate terms.

The outcome of the talks on January 23 also put on display the ascendant axis of Syrian President Bashar al-Assad, Lebanese Islamist militant group Hezbollah, and Iran, backed by Russia and now facilitated by Turkey.

Russian President Vladimir Putin determined the venue and, jointly with Iran, decided on the guest list. Russian Foreign Minister Sergey Lavrov invited the new administration of US President Donald Trump to join the talks. However, the invitation came on Trump’s first day in office and Iran objected to US participation, therefore the US ambassador to Kazakhstan served as a token observer.

The peace talks concluded with an agreement between Russia, Iran, and Turkey to jointly monitor a ceasefire on the ground—one that is not currently holding due to fighting among the rebels and extremist groups. The principal parties to the conflict—the Assad regime and the Syrian opposition—did not have face-to-face negotiations or sign any agreements. Follow-on talks are slated to take place in Geneva on February 8, but there is little evidence that a peace agreement can be reached or that the warring factions genuinely want to end the conflict.

Astana was not technically a peace conference since a long-term peace proposal was not on the agenda, nor was it about a comprehensive ceasefire as Russian planes and Assad’s forces continued to bomb opposition targets in several parts of Syria even as the talks were being held.

While Russia dominates Syrian skies, Iran controls the tempo on the ground with Syrian, Iraqi, and Lebanese Shia militias, in addition to its own Islamic Revolutionary Guard Corps (IRGC) officers who coordinate offensives against opposition strongholds. Iran can, if it so wishes, force the militias it supports to adhere to a ceasefire. Iran and Russia, together, could pressure Assad to cease his offensives. However, since action continues both in the air and on the ground, it is logical to assume that neither Russia nor Iran have exhausted their military options yet. The Assad regime has unabashedly boasted that it has no interest in stopping its military action until “all terrorists are defeated, and all territory recovered.”

With the regime’s victory in Aleppo in December, the Iran-Assad-Russia axis has reached a significant milestone and gained the upper hand for three important reasons beyond mere territorial gain: Assad’s hold on power has been solidified, Turkey is now in Russia’s camp, and the Syrian opposition has lost its major patrons.

With Aleppo in hand, the Assad regime is now secure behind a solid defensible line that stretches from the Turkish border in the north to the Jordanian border in the south. This guarantees the safety of Damascus and the Alawi mountains in the west. It also secures an open border with Lebanon which, since the start of the Syrian war, has become the Assad regime’s strategic depth, giving Hezbollah total freedom to move men and arms between the two countries. To be sure, challenges remain inside that line, in Idlib and in the Damascus suburbs. In Idlib, however, the opposition is split between those willing to participate in peace talks and those unwilling; the two factions are currently fighting one another. As for the suburbs of Damascus, the regime is in the process of regaining those areas now that the battle for Aleppo is over.

Turkey, lacking US support for its early opposition to the Assad regime and facing restrictions and admonitions from the rest of its NATO allies on its harsh Kurdish policies, gradually drifted toward the Russian position on Syria. This stance solidified particularly after Turkey shot down a Russian plane in November of 2015 and Russia subsequently installed an S400 anti-air system along with a warning to Turkey not to try that again. Without NATO backing, Turkey is no longer able to carry out any air operations over Syria without the express permission of Russia. Were it not for its continued membership in NATO, Turkey could now almost be considered allied with Russia, at least as far as Syria is concerned.  In the process, Turkish support for the Syrian opposition has dwindled considerably.

Losing Turkish support, except in those instances—such as the fight for the Islamic State of Iraq and al-Sham (ISIS) stronghold al-Bab—where their actions serve Turkish interests, has been a big blow for the Syrian opposition. With the advent of the Trump administration, the opposition—with the exception perhaps of the largely Kurdish Syrian Democratic Forces (SDF)—has also lost what little support was provided by the United States under the Obama administration. It is not certain at this point if the Trump administration will continue to support the SDF. Saudi Arabia, which has provided considerable funding for the Syrian opposition since 2011, is embroiled in a complicated and costly war in Yemen, seemingly with no end in sight. Given the dimming prospects of oppositional forces in Syria and diminishing oil revenue, shrinking Saudi support is to be expected.

Russia has emerged as the principal player in Syria. The Assad regime cannot wage war without its support, and the opposition can win neither war nor peace except on Russian terms. Moscow now calls the shots, literally. The United States is, for now, out of the picture in Syria and, if Trump makes good on his partnering with Russia, US action will in all likelihood be directed by Putin.

Iran has also emerged as the regional power to be reckoned with, certainly in the Levant. Its backing of the Assad regime has paid off. In Lebanon, the election of Michel Aoun, a Hezbollah ally, has cemented Iran’s influence there. Essentially, its chief ally, Hezbollah, was able to keep the Lebanese presidency vacant for two years until the other side folded and allowed the election of Aoun. In Iraq, despite the ascendancy of Prime Minister Haider al-Abadi, the Iran-supported Shia militia, the Popular Mobilization Forces, and its allies are still a strong force that controls important areas along the Syrian and Iraqi borders. A decade ago, the old balance of power would have pitted the United States, Saudi Arabia, and Turkey axis as the counterweight to the Iran, Russia, and Assad axis. With the weakening of the Saudi role and the virtual neutralization of the United States and Turkey, Astana merely reflected a new power reality in the Middle East.

Nabeel Khoury is a nonresident senior fellow at the Atlantic Council’s Rafik Hariri Center for the Middle East. You can follow him on Twitter @khoury_nabeel.