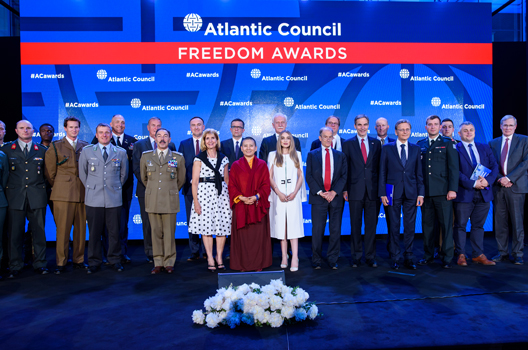 The political, security, and humanitarian challenges facing the world today cannot be overcome without international cooperation and a concerted effort to strengthen the “solidarity of values” of the transatlantic community, Daniel Fried, a recipient of the Atlantic Council’s 2017 Freedom Award, said at the awards ceremony in Warsaw, Poland, on July 7.

The post-World War II international order created by the collaborative efforts of the United States and Europe “is at risk and under assault from without—from Russia—and from within—from those who doubt the value of what the free world achieved and what the free world stands for,” said Fried, a former assistant secretary of state for Europe who is currently a distinguished fellow at the Atlantic Council’s Dinu Patriciu Eurasia Center and Future Europe Initiative.

In an ardent call for transatlantic cooperation, Fried said: “We must equally recommit to the free world and the common values which have propelled us this far.”

Atlantic Council President and Chief Executive Officer Frederick Kempe said the “imperative to remain committed to our core values of freedom, democracy, and cooperation could not be more important. Together, as a transatlantic community, we must do everything in our power to protect the notion of freedom as a fundamental value.”

Fried said it would “fall to [US President Donald J.] Trump to do his part, in his time.”

Fried delivered his remarks on the heels of Trump’s visit to Poland, during which the president explicitly stated US commitment to its NATO allies, and unequivocally reaffirmed his commitment to Article 5, the principle of collective defense. Trump’s speech coincided with the Atlantic Council’s Global Forum in Warsaw on July 6-7.

The focus of all NATO members must be “the common goal of upholding the values that form the foundation of our transatlantic community,” according to Piotr Wilczek, Poland’s ambassador to the United States.

Promoting this ideal, the Atlantic Council’s Freedom Awards ceremony “honors those who have fought for and promoted the freedoms we enjoy today,” said Kempe. This year the Atlantic Council recognized the contributions of Fried, as well as the men and women of NATO’s forces in Central and Eastern Europe; the Migrant Offshore Aid Station (MOAS), a civil society group working to rescue migrants attempting to cross the Mediterranean; and Ani Choying Drolma, musician, humanitarian, and UNICEF Goodwill Ambassador to Nepal. A posthumous award was also presented to Zbigniew Brzezinski, a former national security advisor to US President Jimmy Carter.

He described how “real gains are being made in the fight to defeat [the Islamic State of Iraq and al-Sham], for the first time in many years NATO’s eastern flank has true deterrence capabilities, and allies’ solidarity is stronger than ever as shown in the commitment to increase defense spending.” While the battle for the post-war international order defined by freedom and security was hard-fought, “today, many continue the work to ensure that this hard-won freedom is never again lost,” said Wilczek.

Responding to the “heightened and persistent threat” posed by increased Russian aggression, NATO’s eFP forces in the Baltics “demonstrate the enduring solidarity among NATO members, which was reaffirmed yesterday in Warsaw by President Donald Trump—the principle of all for one, and one for all,” said Jones. “Each of the twenty-nine allies is covered by that solemn pledge, but also responsible for it,” he said, adding: “I am pleased that our alliance maintains the will and the solidarity to protect its territory.”

Gen. Salvatore Farina, commander of Joint Force Command Brunssum, accepted the award for the eFP forces, saying: “The mission of these four battle groups has just started,” and there remains more to be done to ensure the security and freedom of the Alliance.

“Freedom is not free. It must be fought for, and it must be defended,” said Stephen Hadley, a former US national security advisor under President George W. Bush and executive vice chair of the Atlantic Council. To that end, he said, “there is so much that we can do together,” as members of a transatlantic alliance.

The foreign service careers of Brzezinski and Fried underscore what can be achieved through cooperation with allies. Fried and Brzezinski, in his lifetime, symbolize the strong ties between the United States and NATO ally Poland. Brzezinski, a Polish-American, worked to strengthen the US-Polish alliance and was deeply involved in NATO enlargement in the 1990s. Poland became a NATO member in 1999. Fried is a former US ambassador to Poland.

In a moving tribute to Brzezinski, Jerzy Koźmiński, president of the Polish-American Freedom Foundation, lauded him as a “great strategist whose vision was always coupled with pragmatism… and whose strategies were always [ones] of principle.” Brzezinski’s son, Ian Brzezinski, a senior fellow at the Atlantic Council’s Brent Scowcroft Center for International Security, accepted the award for his father. In his acceptance speech, Brzezinski described the focus of his father’s career as “the vision of a transatlantic community, featuring a democratic, undivided, and secure Europe,” which he saw as the “necessary foundation for a stable international system.”

In the same vein, Fried’s career was defined by the idea that “America can be lastingly prosperous only if other countries do well, as well,” said Andrzej Olechowski, a former Polish foreign minister who presented Fried his Freedom Award. However, Olechowski added: “These principles are today challenged by a different vision of the world.” The international community “has work to do still,” Fried said in his acceptance speech.

“Freedom is threatened not just by conquest or political oppression, but also by hunger, ignorance, poverty, and disease,” said Hadley. Through its efforts to save the lives of refugees seeking a better future, MOAS “works on these problems every day, one person at a time,” he said.

Maltese President Marie-Louise Coleiro Preca presented the Freedom Award to MOAS in a recorded video. In her remarks she emphasized the need for a joint approach to address the migration crisis. It “should be a top priority on our national agendas,” she said. Preca insisted that allies “must have one voice emphasizing the need for legislation and policies” to safeguard human rights. Accepting the award for the organization, Maria Luisa Catrambone, daughter of MOAS founders Christopher and Regina Catrambone, said that migration “is the defining global humanitarian crisis of [this] generation, and our response to it, as an international community, will be remembered by history.”

“In the face of apathy and inaction, we lead a community that continues to choose courage over fear,” she said.

Drolma’s humanitarian work, like that of MOAS, does not focus on freedom in the geopolitical sense of the word, but advances the ideal that “we all wish for the same thing; we all share the common desire to be happy in life,” she said.

Paula Dobriansky, a senior fellow at Harvard University’s Belfer Center and Atlantic Council board director, presented the Freedom Award to Drolma, who concluded the evening with a musical performance.