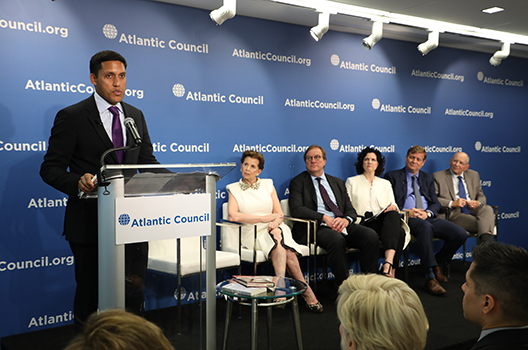 Describing it as a “historic day for the Atlantic Council,” Atlantic Council President and CEO Frederick Kempe said the Center will have “a major and ambitious goal” to “enhance the resilience of one billion people by 2030.”

Arsht explained her support for resilience work has sprouted naturally from a “life-long interest in what makes individuals and communities resilient.” She has been particularly inspired by the resilience of athletes bouncing back from terrible injuries or disease and performers who fully embrace the notion of “the show must go on.”

For Arsht, “resilience is a way of thinking. It is how you behave and how you see the world.” With her support for the new Center, she aims “to help populations around the globe become more resilient at the individual, societal, and economic level.”

Raj Shah, the president of the Rockefeller Foundation, explained that the push to make societies more resilient is “about equity and ensuring that as many people—and vulnerable people in particular—have a fair shot at a safe, productive life.”

The goal to help one billion people become more resilient “is not just a conceptual concept,” Shah said, adding, “it is a billion people actually leading better and more meaningful lives… our goal is ambitious; our goal is necessary.”

The Rockefeller Foundation’s support is part of a long history of investment in resilience solutions, as Shah explained that “since 2005, the Rockefeller Foundation has invested more than half a billion dollars in resilience efforts to help equip the world’s cities in particular as they address 21st century challenges like climate change and a rapidly shifting economy, global trends like migration, fragility, and conflict.”

The new work with the Atlantic Council “marks an important next chapter in our ongoing commitment to the field of resilience. This partnership will create the leading institution working to make communities around the globe more resilient to the urgent crises facing humanity,” Shah added.

The Center’s director, Kathy Baughman McLeod, admitted that the challenges facing humanity are daunting, but “society has taken on these challenges in the past and won.”

“We are at record lows for child mortality, illiteracy, and extreme poverty,” she said, adding that while the threats are complex and constantly changing, “we know what to do about it and we can do something about it.”

Shah said: “The Atlantic Council team led by Kathy McLeod has a deep understanding of the importance of helping individuals, cities, and communities across the globe and that’s why we are making this commitment to this institution.”

“They have a strong track record of supporting transcontinental networks and of course alliances that tackle the most pressing issues facing our country and our planet and we look forward to strengthening those partnerships in the years to come,” he added.

In addition to the major support from the Rockefeller Foundation, Baughman McLeod announced that the Center will also work closely with partners from the Urban Institute, Zurich Insurance Group Ltd., the Red Cross, Global Island Partnership, Swiss Re, HR&A Advisors, and governments across the Caribbean. The Urban Institute will specifically assist the Center with developing a methodology for the Center’s work to reach one billion people by 2030, Baughman McLeod said.

Baughman McLeod also announced that Miami-Dade County will be “the first resilient community that the Adrienne Arsht-Rockefeller Foundation Resilience Center will be working with.” The community has already been deeply involved with resilient projects such as the 100 Resilient Cities initiative and other climate change, migration, and security initiatives.

Jim Murley, Miami-Dade County’s chief resilience officer, explained that the many challenges facing the community means that “we understand vulnerability… and everything we do in local government has to be resilient.”

The support of partners and financial backing of the Rockefeller Foundation and Arsht means that “we now have the resources combined with the talent to make a global center to make one billion people more resilient by 2030,” Kempe said, adding that “we have the alignment of vision, leadership, and resources to make a major difference.” The new support for the Council’s resilience work “is one of the most gratifying moments in the Atlantic Council’s nearly sixty-year history,” he said.

“With all of our partners pulling in the right direction we can meet this goal,” Baughman McLeod said. “We are 100 percent confident that we can do it,” she added. “2030 here we come.”