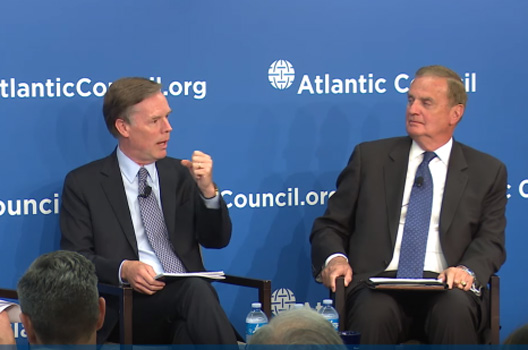 NATO must respond to threats from Russia by permanently stationing troops in the Baltic States, Poland, and the Black Sea region, according to a new Atlantic Council report.

“These are clearly modest—in terms of the troop commitments—measures designed to stabilize the alliance, protect our smaller allies in the east, and do what the NATO alliance has to do: protect the member states and collective security in Europe,” said R. Nicholas Burns, an Atlantic Council board member who served as under secretary of state in the George W. Bush administration. “We need to establish effective deterrence against [Russian President Vladimir] Putin and that’s why our number one recommendation is the permanent basing of NATO troops in those areas,”

Burns co-authored the report, “Restoring the Power and Purpose of the NATO Alliance,” along with retired Gen. James L. Jones, Jr., chairman of the Atlantic Council’s Brent Scowcroft Center on International Security and a former national security advisor in the Obama administration.

Burns and Jones spoke at an event at the Atlantic Council in Washington on June 27. Evelyn Farkas, a nonresident senior fellow with the Scowcroft Center, moderated the conversation.

US Defense Secretary Ashton Carter has described Russia as a top national security threat. The Pentagon has responded to Russian threats by quadrupling its  budget for European defense in 2017; NATO plans to deploy four combat battalions in Poland and the three Baltic States: Estonia, Latvia, and Lithuania; and US military officials in May inaugurated a missile interceptor site in Romania, which will be part of a larger missile defense shield. Earlier in June, NATO conducted a series of major military exercises—known collectively as Anakonda-2016—in Poland and a separate exercise—BALTOPS—in the Baltic Sea.

Russia has accused NATO of provoking a crisis. Moscow found an unexpected ally in German Foreign Minister Frank-Walter Steinmeier, who described the NATO exercises as “saber-rattling.”

Burns said the recommendation he and Jones make for a troop buildup in Europe’s east is “not war mongering.”

“That’s what the Russian Federation, the Putin government, wants you to believe,” he added.

NATO will hold its summit in Warsaw on July 8-9.

Burns said it is important for the Warsaw Summit to demonstrate to Putin that NATO is committed to collective defense articulated in Article 5 of the North Atlantic Treaty. “If he believes that we are powerful and unafraid to exercise that power he will be much more likely to engage in productive dialogue,” Burns said of the Russian president. “We need to stand up to Putin, and I hope that will be the message from Warsaw.”

Among the other recommendations in the Atlantic Council’s report are: a commitment from NATO members to meet the target of spending two percent of their GDP on defense—at present, only five of the twenty-eight member states actually meet that goal; sustained pressure of European sanctions on Russia over its annexation of Crimea in 2014—sanctions are expected to be extended this week until January of 2017; a continued NATO troop presence in Afghanistan; and a restoration of US leadership and support for NATO.

The report was driven partly in response to a sense of a marginalization of NATO, said Damon Wilson, executive vice president for programs and strategy at the Atlantic Council.

“If you don’t own this alliance it will wither,” he said noting that the report calls for leadership and imagination, particularly American leadership.

Wilson, a former senior director for European affairs at the National Security Council, said the Warsaw Summit should prepare for long-term challenges facing the alliance, NATO should demonstrate the reality of its ability to protect its allies in the east, and European and Canadian NATO members must invest more in defense. The alliance will be undermined if the only debate about it in the United States is through the prism of burden sharing, he added.

US President Barack Obama, too, in an interview with the Atlantic described some of the United States’ European partners as “free riders.”

“If we don’t achieve this two percent of GDP [target], shame on us,” said Jones. Noting that this budgetary commitment was made at NATO’s Prague Summit in 2002, he added: “We still have too many countries falling short of what they agreed to many, many years ago. Frankly, if we don’t achieve that then NATO’s credibility is suspect.”

“It is not only about paying your way…the American public is no longer willing to be the only ones who do the majority of the fighting and the dying,” Jones said, noting that more NATO allies will need to step up to combat roles. “It is fair to say that some of our allies need to not only step up financially, but also step up to the troop commitment to do the hard work,” he added.

Jones exhorted NATO to be a more “proactive” alliance that works on solutions to issues such as the migration crisis, the largest movement of people across Europe since World War II that has been driven by conflicts across the Middle East and Africa.

Burns, a former US ambassador to NATO, said the alliance and its European allies are facing the greatest set of challenges since the end of the Cold War.

Jones cited four specific strategic challenges—from Russia, the disorder in the Middle East, uncertainty about US leadership, and a weakened European Union.

The European Union faces the very real prospect of the United Kingdom leaving the bloc following the June 23 referendum in which a majority of Britons voted for a so-called Brexit.

Burns said the UK’s exit from the EU could fracture the country and advised the US administration—the current one as well as its successor—to more closely embrace the UK. The United States must also seek a closer relationship with Germany, the dominant power in the EU, he added.

Jones noted the primacy of US leadership.

“It doesn’t mean that we talk down to our allies, it means that a US president has to be engaged in what NATO is about,” said Jones. “We cannot simply walk away from a twenty-eight-member nation alliance and pretend that it is not useful. It is terribly useful.”