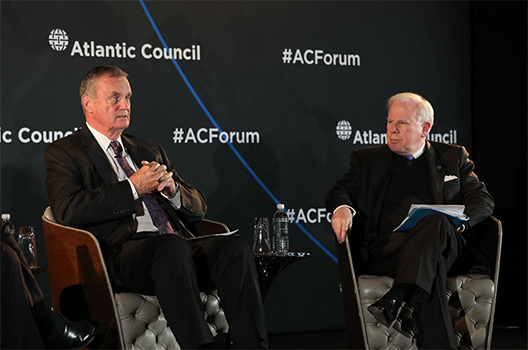 The Atlantic Council’s outgoing interim chairman, retired US Marine Corps Gen. James L. Jones, Jr., implored policymakers and citizens to embrace the need for change in a rapidly transitioning world. “You rise and fall based on your ability to change when the environment around you changes,” he said. “If you cannot change… you [will] fail.”

Jones was joined by John F.W. Rogers, Chairman-elect of the Atlantic Council and a Goldman Sachs executive and government service veteran, in a discussion with Atlantic Council President and Chief Executive Officer Frederick Kempe at the Council’s Annual Forum in Washington on December 14.

Jones warned that there is still “a naïve belief in our country that there is some sort of destiny that the primacy of the United States is ensured. . . forever.” On the contrary, he said, “we can fail. There is nothing in writing that says that at the end of the 21st century, the United States will be as influential on the global playing field as we were at the end of the 20th century.”

The biggest threat to US security in the coming century, Jones argued, is the rise of autocracies bent on challenging the international order, namely China and Russia. “Appeasement of these competing autocracies is not the way to go. They do not understand appeasement. If you give in on one thing, they’ll take the next step,” Jones said.

The response rather, according to both Rogers and Jones, should be proactive US international engagement to secure alliances and partnerships around the world and meaningful reform of international institutions that are no longer suited for the geopolitical competition of the 21st century. “Institutions we created in the 20th century to respond to 20th century problems need to change,” Jones argued. “The United States can’t do it alone,” Rogers added. “It has to do it in concert with others and it has to be a leader in evolving the institutions that are going to [meet these challenges].”

Enter the Atlantic Council, according to Rogers. “The unique aspect of the Atlantic Council is [its] ability to foster the development of those new institutions [and] to refine some of the ones that have existed,” he said. Going forward, the Council can focus on helping US policymakers and US allies to build new organizations and structures to respond to the largescale changes coming in this century. The Atlantic Council can be, according to Rogers, be “a catalyst to help Washington to be as good as we want it to be and maybe better than it is [now].”

Kempe outlined what the Atlantic Council believes will be the “big bets” for the future, which will drive the Council’s work in the years to come. Echoing the comments made by Rogers and Jones, Kempe said the Council firmly believes that great power competition is returning and conflict between these states must be avoided. Similarly, democracies are now fraying while autocracies appear to be surging across the globe.

At home, questions are being asked about what role the United States can and should have in the world, while the future of the international order remains in serious doubt. On top of all this, new technologies are appearing at an ever-increasing rate, providing enormous opportunities for innovation but also threatening to disrupt societies. Finally, these massive emerging challenges highlight the need to train and prepare the next generations of leaders who will be tasked with guiding the United States and its allies through these difficult challenges.

Jones said he was confident that the Council would be able to adapt for the new challenges of the 21st century, in part because of its track record of success. “When I think of the Atlantic Council,” Jones explained, “I think of the last decade where the Council itself actually changed to meet the environment we are operating in.”

Adapting to a new environment will mean being able to look at policy problems from a variety of lenses, Rogers said, as “you can’t divide any more [problems] into the very neat organizational structure of just economic, just political, [or] just military…. The blending is quite pronounced.” Jones was confident, however, that the Council’s track record of being able “to think strategically” will help it navigate this transition. “For the future,” Jones concluded, “it is a strategic emphasis that will keep the Atlantic Council viable.”