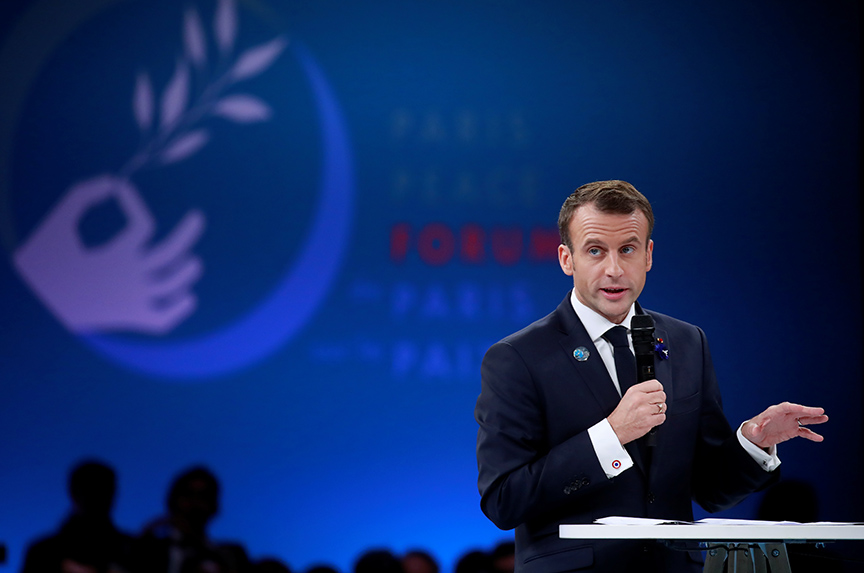 French President Emmanuel Macron on November 12 launched the “Paris Call for Trust and Security in Cyberspace”—the first state-supported initiative that brings together a set of principles that both the public and the non-governmental sector can implement and endorse to increase trust and stability in cyberspace.

Macron introduced the Paris Call at the Internet Governance Forum in Paris. The event was part of Paris Digital Week, which has brought together thinkers, innovators, decision-makers and investors for a discussion on current and future digital issues from November 11 to November 14.

In his speech, Macron called on all actors to work together toward building trust and security in cyberspace. Many states, as well as private companies and civil society organizations, have already thrown their support behind the declaration on developing common principles for securing cyberspace. The Atlantic Council’s Cyber Statecraft Initiative is proud to be one of the early supporters of the Call.

The Call is a political declaration that signals a global mobilization to ensure the stability of cyberspace. Toward this end it seeks to promote the peaceful use of information and communication (ICT) technologies and secure commitments from state and non-state stakeholders.

The Call integrates into one document a set of principles for responsible behavior in cyberspace that have been formulated and agreed on through other processes. These principles include, for example, the eleven norms of responsible state behavior agreed by the Group of Governmental Experts in 2015 and endorsed by the United Nations General Assembly that same year, and a selection of industry actors’ efforts to formulate cybersecurity principles such as Cybersecurity Tech Accord, Microsoft’s Digital Peace Campaign, and Siemens’ Charter of Trust.

The Call seeks to become the first-ever multi-stakeholder-endorsed document on cybersecurity norms that is supported by governments, industry, civil society, and academia. Previous initiatives have been supported only by government experts, governments, or industry leaders.

The Call brings together principles and approaches that are mutually reinforcing and highlights the common nature of stakes and responsibilities the international community has in building trust and security in cyberspace.

The cooperative measures in the Call cover a wide range of issues such as the development of international norms and their implementation, capacity building, legislative frameworks, and industry standardization.

Through the Call, the French government affirms its willingness to work together with the international community using the existing fora and institutions, and mechanisms to implement cooperative measures, notably to:

The Atlantic Council’s core mission is to work together to secure the future. In the radically changing global landscape, we generate ideas to support our communities’ ability to navigate the prospect of the return of great power conflict, the breakdown of the international global order, and the disruption and opportunities powered by technology.

We believe that the global community has the responsibility to ensure that the competition between states for power and influence, the malicious motivations of non-state actors and criminals, and the motivations of ICT industry do not indiscriminately impact the lives of civilians and prevent the harnessing of technology’s full potential.

We salute the French government’s initiative and hope that other governments and private sector actors will join this call for global mobilization for the stability of cyberspace. The US government, in particular, should continue the leadership efforts of the past four US administrations to establish cyber norms as the essential element of stability in cyberspace.

Image: French President Emmanuel Macron delivered a speech at the opening session of the Paris Peace Forum, part of the commemoration ceremony for Armistice Day, one hundred years after the end of the First World War, in Paris, France, on November 11. (Reuters/Gonzalo Fuentes/Pool)