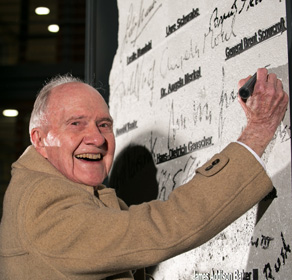 Coinciding with the 25th anniversary of the fall of the Berlin Wall, the Atlantic Council on November 13 unveiled a three-ton segment of the Wall bearing the signatures of individuals who played historic roles in bringing the Cold War to a successful end.

“Bringing this particular piece of the Berlin Wall to Washington, DC was conceived as a lasting symbol of the transatlantic relationship, with the German-US relationship at its core,” said Atlantic Council President Fred Kempe at the ceremony, fittingly held at the German Embassy.

In underscoring the significance of the transatlantic bond, Kempe said: “By marking the 25th anniversary, the Atlantic Council is not only celebrating what we had accomplished in the past, but we are reminded to now think beyond the Berlin Wall.”

“It’s time that we talk deeply and sincerely because the path ahead is not any clearer than it was in 1989,” Scowcroft told the audience.

Horst Teltschik, who was Scowcroft’s German counterpart during that transformative period, recalled: “Nobody had a strategy for how to deal with this situation. But what we were sure about from the very beginning was that we have a great friend in the United States. We knew we could rely on them and we did.”

The Wall segment, initially contributed to the Atlantic Council on October 8 by the German energy company Verbundnetz Gas (VNG), had been airlifted from Germany to the United States.

VNG Board Director Klaus-Dieter Barbknecht said, “We are convinced that the Atlantic Council, as a guarantor of the transatlantic dialogue, is the best treasure of unique segment of the Berlin Wall.”

Congressman Charles Boustany, who also attended the event, pledged to work with his fellow members of Congress to revitalize the German-American partnership.

For more information, visit #beyondBerlinWall, and view a photo gallery of the unveiling ceremony.