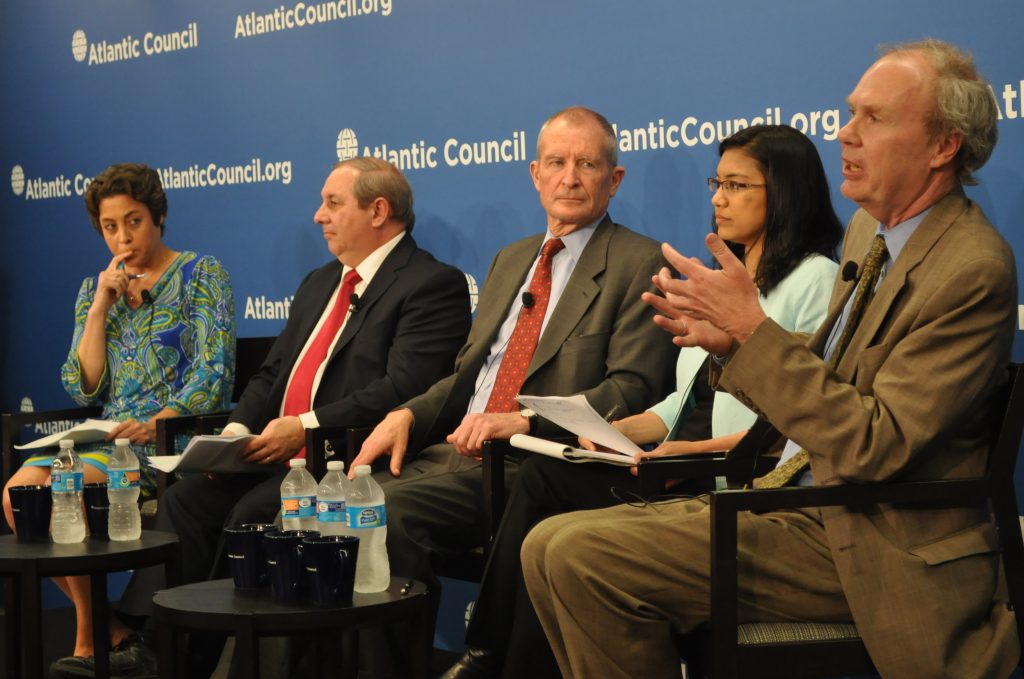 From Azerbaijan’s Ilham Aliyev to Zimbabwe’s Robert Mugabe, dictators seem to be gaining the upper hand these days—outsmarting the most determined pro-democracy activists with a clever mix of 21st-century technology and old-fashioned repression.

Why this is happening, and what we can do about it, is the subject of an insightful new book that covers the A-to-Z of dictatorship around the globe: Is Authoritarianism Staging a Comeback?

The answer is a resounding yes, according to half a dozen scholars who gathered April 21 at the Atlantic Council to discuss the book and its implications. The panel included the volume’s two editors, Mathew Burrows and Maria J. Stephan, who together lead the Atlantic Council’s Future of Authoritarianism project.

“The success rate of civil disobedience has declined to a rate not seen since the 1950s. It’s worrisome,” said Stephan, a Senior Policy Fellow at the United States Institute of Peace (USIP). “There’s an element of authoritarian resilience around the world.”

Peter Ackerman, founding chair of the International Center on Nonviolent Conflict, has written extensively on civil disobedience in the 20th century—ranging from Mohandas Karamchand Gandhi’s push for Indian independence to the dismantling of South Africa’s apartheid system.

“We have to think very carefully about what skillful resistance is, and what kinds of policies we should have to help civil resisters in their quest to create more democratic societies,” Ackerman said. “Violent insurrection relies on military means, where people try to shoot their way to the top and basically create a change in regimes. Civil resistance, on the other hand, involves nonviolent disruptions.”

Iran and Russia are two of the world’s worst authoritarian regimes today, said Ackerman. “And what those governments are most afraid of isn’t American military power but civil resistance within their own societies that they can’t control.”

Paula J. Dobriansky, Senior Fellow at Harvard’s Belfer Center for Science and International Affairs, urged a “blueprint for action” against regimes such as the one that now controls Venezuela, which she visited in 1998 to monitor the presidential election ultimately won by Hugo Chávez.

“You can have laws, but there are good laws and bad laws. And in this case, the laws were very much manipulated by the judges,” said Dobriansky, a former Under Secretary of State for Democracy and Global Affairs, noting that Chávez held onto power for fourteen years—through increasingly authoritarian means—until his death in March 2013. Chávez’s handpicked successor, Nicolás Maduro, is resorting to increasingly violent means to maintain his grip on power.

“We need to be taking preventive action here, stepping up and providing the kind of assistance that those in the resistance are looking for,” said Dobriansky, calling the global reversal of democratic governance one of the world’s most troubling developments.

“During the war in Afghanistan, there was quite a debate here about whether we should partner or not partner with the ‘Stans,’” she said, referring to Central Asia’s five former Soviet republics. “We had to be effective, but those avenues also opened up doors allowing us to lay down our concerns [to those regimes] about human rights abuses.”

In fact, those five dictatorships vary substantially in the degree to which they repress their own people, said Regine Spector, Assistant Professor of Political Science at the University of Massachusetts-Amherst.

“Central Asia provides an interesting lens from which to observe authoritarianism,” said Spector, who wrote a chapter on that region. “Some people have said these countries are ripe for revolution following the Arab Spring. Others say they are firmly entrenched.”

Uzbekistan, for example, “has had a long history of state-sponsored repression,” she said, while Kyrgyzstan and Kazakhstan both use violence, but much more selectively.

“Some of these regimes are incredibly sophisticated at defining the political agenda in a way that doesn’t close out space or discredit the press entirely,” she said. “In Kazakhstan, the leadership manipulates political drama and employs rhetoric so it looks like there are debates. But what’s really going on is the government reframing what democracy means in the interest of preventing fragmentation.”

Retired US Navy Adm. Dennis C. Blair, chairman of Sasakawa Peace Foundation USA and a former Director of National Intelligence, said the importance of the US military should not be discounted when it comes to influencing authoritarian regimes overseas.

It’s also true that the most repressive leaders are wary of their own armies “because they have the potential to knock them off,” he said,

Perhaps it’s no coincidence that the Pentagon “has thousands of points of contacts with officers of all ranks in these authoritarian countries,” said Blair. “It’s really quite incredible what some dictatorships allow.”

George A. Lopez, who wrote a chapter in the book on authoritarianism and sanctions, argues that the enforcement of so-called “smart sanctions” against dictatorships for their abuses of power could be effective at shaping positive behavior.

“Sanctions by themselves have never brought down a dictatorship, but this particular tool has been underused,” said Lopez, Vice President of USIP’s Academy for International Conflict Management. “We’ve not done enough analysis and use of these tools in a way that would target not only the thin layer of dictatorship but also the internal enablers.”

According to Lopez, targeted sanctions take an average twenty-one months to succeed.

“The US Treasury Department could impose sanctions on human rights violators of the kind recently imposed on seven individuals in Venezuela,” he argued. “You don’t have to dig very deeply to see a dictatorship tied to corruption and illicit networks. When they’re based on holding and shipping companies, or banks or shadow companies, it’s relatively easy—with the help of not only the US government but also Interpol and others—to identify where the chokepoints might be.”

Back in the old days, “we thought that by freezing bank accounts, passports, and visas of those at the top of the elite, we would get dictatorships to rethink their policies,” said Lopez, who among other things has served on a United Nations panel that monitors UN sanctions against North Korea.

But such a policy—whether it applies to Fidel Castro’s Cuba in the 1990s or Vladimir Putin’s Russia in 2015—can only go so far.

“Because sanctions are only a tool and a means,” said Lopez, “you can’t have sanctions work in the absence of a larger political strategy.”