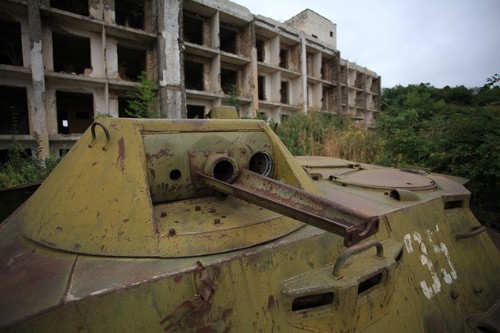 While most European governments are cutting defense spending to balance their budgets and curtail debt, there are at least two countries on the Continent that are doing the exact opposite: Azerbaijan and Armenia are both ramping up their defense spending, and have been doing so for the last several years. The two countries are locked in a frozen conflict in Nagorno-Karabakh, and if the rest of Europe’s leaders don’t start taking it seriously, they could find themselves with another very hot war in the region.

Nagorno-Karabakh is a province in Azerbaijan, but Baku lost control over it in the 1993 war with Armenia. In addition to Nagorno-Karabakh, the Armenian military occupies seven adjacent territories. Azerbaijan, rich in hydrocarbon reserves and the current darling of western energy companies, is finding the present situation untenable. One million internally displaced Azerbaijanis and a stale peace initiative spearheaded by the OSCE Minsk Group are partly to blame for Baku’s growing impatience.

More self-confident, richer, and with a military budget exceeding $3 billion, Azerbaijan is now in the process of convincing itself that fighting a war for the liberation of Nagorno-Karabakh may not be a bad next move.

Aside from calling Azerbaijani officials warmongers, the European Union is not responding adequately either to Azerbaijan’s newfound self-confidence, or to the mounting tensions in the region. The root of this is the EU’s refusal to accept greater responsibility for security in the southern Caucasus. A corollary to this is that many European capitals prefer a cozy relationship with Moscow to building up security cooperation with the south Caucasus states.

The problem is not new. In 2008 Brussels dismissed Georgian President Mikheil Saakashvili’s warnings, and when Russia recognized the independence of Georgia’s breakaway regions of Abkhazia and South Ossetia, and war broke out between the two countries, Europe struggled to respond. (Two years on, we are still struggling.) Part of the problem in 2008 was that Europe’s conflict-prevention mechanisms failed. Europe refused to engage with Mr. Saakashvili on security and integration issues. Most Europeans saw him as a hotheaded, pro-American stooge, while many EU capitals saw increasing ties with Georgia as a major liability for relations with Moscow.

Yet, Mr. Saakashvili’s message to Europe at the Bucharest NATO Summit that year was an important one: that stability in the south Caucasus will remain fleeting as long as the region’s frozen conflicts remain unresolved. This implies that Europe must recognize the security realities in the region, which after all is part of Europe, and under which run major energy pipelines that connect Europe with Caspian oil and gas.

Two years later it is hard to see that Europe has internalized Mr. Saakashvili’s message. Today, Azerbaijani President Ilham Aliyev is sending Europeans the same signal: Own up to your security obligations in the region and we won’t feel compelled to overspend on our military. While talking to Baku about energy cooperation is necessary, Europe’s approach does not amount to a balanced partnership in the eyes of the Azeris.

That needs to change—for the EU’s sake as well as for the rest of the Continent’s. It is urgent that EU leaders take the security trends in southern Caucasus seriously, and take Azerbaijan’s warning at face value. Direct and proactive European engagement could lessen the tensions in the region, and get Armenia and Azerbaijan back on talking terms. If Brussels fails and a new war breaks out in the Caucasus, EU security will be gravely compromised. Not only would a conflict between Armenia and Azerbaijan undermine Europe’s southern energy corridor, it would also impact the southeastern rim of the EU, making its members more vulnerable to asymmetric threats like smuggling and terrorism. Another war in the region can also further complicate Europe’s relations with Russia.

The question of security in the southern Caucasus is an existential one for Europe. Asking where Brussels can stop taking conflicts seriously is the same as asking how far do the borders of Europe stretch. EU security and the stability of the continent are two sides of the same coin.

Borut Grgic is a nonresident senior fellow at the Atlantic Council. He is the founder of and senior advisor to the TransCaspian project, EPC Brussels, and an expert in EU, Balkan and Caspian relations, political economy and frozen conflicts. This article was first published by The Wall Street Jouranl. Photo Credit: Demotix.