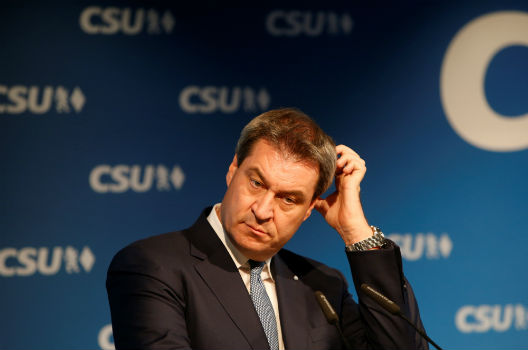 The result of the October 14 election in Bavaria has prompted the question: is this the beginning of the end for German Chancellor Angela Merkel’s grand coalition?

The Christian Social Union (CSU), which along with Merkel’s Christian Democratic Union (CDU) and the Social Democratic Party (SPD) is part of the governing coalition in Berlin, suffered heavy losses. It lost its absolute majority in the Bavarian parliament and 10.5 percent of votes compared to 2013. This was its worst showing since 1954.

At the same time, voters in one of Germany’s wealthiest states punished the junior coalition partner, the SPD, with a single-digit result—the second-worst for the Social Democrats in postwar elections.

Here are some key developments and takeaways from Bavaria’s election:

While party members in Berlin and beyond may be hitting the panic button, the CDU and SPD leaderships have urged rebels and party brass to hold that thought until after the election in the state of Hesse on October 28. Their argument – the number one lesson from Bavaria is that infighting will lead to further disillusionment and defections among core voting blocs.  Both of Germany’s “big tent parties”—the CDU and the SPD—are dealing with steady losses in the face of mounting pressure from other parties (mainly the Alternative for Germany and the Greens). As socioeconomic issues have lost salience in favor of socio-cultural issues, the SPD has struggled to retain its traditional working-class base. Meanwhile, the CDU has found itself outflanked on socio-cultural issues by the upstart, populist, right-wing anti-immigration Alternative for Germany (AfD), especially in the aftermath of the refugee crisis.

Following the election in Bavaria and looking ahead to the possible outcomes of the election in Hesse, there is  growing doubt whether the grand coalition will have a popular mandate in a month’s time (together the CDU-CSU-SPD are polling under 50 percent). Looking even further ahead, the CDU will hold its party congress in December, and there are growing whispers that Merkel’s time as leader of the CDU may be up. But perhaps most important in the short term is whether the SPD leadership will be forced to withdraw from the grand coalition if there is an uprising among the party’s left and file-and-rank after a bad showing in Hesse.

Both Merkel and Horst Seehofer may politicize the defeat as part of their larger power struggle. Once considered two sides of the same coin, the Merkel-led CDU and the CSU leadership have feuded over fundamental policy issues often in the past year, most notably over migration and asylum policies. These feuds are emblematic of the growing ideological divide between the mainstream CDU, to which Merkel belongs, and the more conservative CSU leadership of Seehofer and Markus Soeder.

Seehofer has tried to place blame for the CDU-CSU’s struggles on Merkel’s “wir schaffen das” (“we can do it”) welcome culture amid the 2015 refugee crisis. Outside of the AfD, he has been Merkel’s biggest critic, and it would not be surprising if he tries to pin the blame for the CSU’s poor result in Bavaria squarely on Merkel.

Make no mistake, the Bavarian election was not ideal for Merkel. However, there may be a silver lining. She may be able to use the fallout from the election to reclaim control of the CDU-CSU bloc. Merkel can, backed by the data, decry the CSU result as a consequence of its campaign strategy, denouncing its rightward shift, and place a share of the blame on oddities of political culture in Bavaria. In the wake of the election, many CSU voters were critical of Seehofer, who among CSU voters has a 31 percent approval rating, compared to 50 percent for Merkel. Furthermore, 66 percent said Seehofer was to blame for the state of the CSU, while only 33 percent said Merkel. Time and time again the chancellor has shown the ability to capitalize on political opportunities when they present themselves, even with her back against the wall. That will become increasingly difficult though if things do not go the CDU’s way in Hesse.

What is more, after Monday’s CSU leadership meeting, Seehofer looks to be staying on against all predictions on the eve of the election. Unless there is a real push from inside the CSU to dispose of him as chairman in the next few days, the dynamics of three to four weeks of intense coalition talks in Munich are set to take over, saving Seehofer from further consequences. And after those talks are concluded, the grand coalition will have to face its disruptor-in-chief again.

The CSU ran its campaign on two related premises. First, that asylum and migration issues were of the utmost importance to voters and would be emphasized accordingly. And second, that its biggest threat was the AfD. Both assumptions proved largely untrue. The CSU lost more voters to the Greens (190,000)  and to the center-right Free Voters (220,000) than it did to the AfD (160,000). Only 33 percent of voters said migration and asylum policy was very important for their decision, behind school and education policy (52 percent), housing issues (51 percent), and environmental policy (49 percent). It is possible that the best campaigner for the AfD, which garnered 10.2 percent of the vote – significant but below the national trend and polling expectations – in the run up to the election was Seehofer. He tried in vain to outmaneuver the AfD by bringing socio-cultural issues to the forefront.

The Greens were the big winner in Bavaria. The party came in second place, winning 17.5 percent of the vote, which marked an 8.8 percent increase from 2013. The result in Bavaria is indicative of a wider trend in German politics. According to the most recent German-wide polls, the Greens are the second-biggest party, behind the CDU/CSU and ahead of the SPD.  Once a left-wing party on the margins, the Greens have benefitted from a shift to the political center. The national Green party has co-opted the strategy used at the state level in its  traditional stronghold of Baden Württemberg, where it combines political pragmatism, a business-friendly stance, traditional environmental protectionism, a pro-European platform, a forward-thinking approach to integration and immigration, and an emphasis on local and community issues. The Greens’ hybridized centrist approach has siphoned voters from both “big tent parties’” and created headaches for leaders in Berlin’s Willy Brandt and Konrad Adenauer houses, the SPD and CDU headquarters respectively. Time will tell whether the Green party’s recent fortunes are merely the byproduct of SPD weakness or something more permanent in German politics.