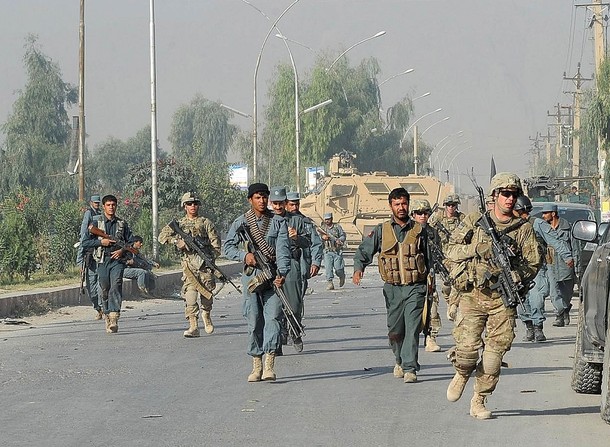 Beaufort is a great film. It tells the story of a platoon of young Israeli soldiers at the turn of this century pointlessly asked to defend an isolated, old Crusader fort deep in Hezbollah-controlled southern Lebanon at the very end of a failed occupation.

One-by-one they die, with the only apparent point to their sacrifice being to ease the embarrassment of their squabbling political masters back in Tel Aviv. Swap Lebanon for Afghanistan.

As a professor of defence strategy I know there are times when given the dangerous world in which we live the West must regrettably use force. Equally, I also know that on such occasions people are going to die – enemies, bystanders and our own soldiers. Therefore, I take my profession, my thinking and my guidance very seriously; especially as I am conceited enough to believe my opinion may on occasions count for just a modest something.

On each occasion when our forces are sent into action I ask myself six simple questions concerning objective, strategy, cost and performance. Specifically, I seek to understand the aim and that said aim is properly clarified and weighed against the necessary method and resources – strategy. 1. Is the use of force, the size of the force and its method appropriate to the achievement of a just political objective? 2. Is there a clear strategy for success? 3. Are the minimum conditions for ‘success’ achievable and understood? 4. Is the use of force legitimate in the eyes of the international community and the region to which the force is being sent? 5. Is there sufficient political will and capital at home to sustain such an effort? 6. Are the resources committed sufficient to succeed?

Even back in 2001 none of my six questions could be answered unequivocally in the affirmative. However, such was the impact and gravity of the attacks on New York and Washington and so clearly was Afghanistan the focal point for Al Qaeda activity that a significant response was called for. However, in the wake of the killing of Osama Bin Laden, the US withdrawal from Iraq, the drawdown of forces in Afghanistan, the now decisive shift in US defence strategy away from such types of engagement and given the depth of the West’s economic crisis, and after much careful thought I no longer believe that any of my six questions can be answered in the affirmative.

1. There is now no clear link between the use of force in Afghanistan and the achievement of something that would look like a stable Afghanistan;

2. There is no clear strategy for success other than the blind hope that the training of Afghan National Security Forces will somehow lead to the creation of a single institutional pillar that can in and of itself sustain a stable Afghanistan post-2014. Forces the paper expansion of which has been so fast that there are clear signs of infiltration by the Taliban and other elements;

3. Some progress has been made on the ground in support of the Afghan people but there is no longer any real chance that legitimate governance, just rule of law and a stable society will be realised in Afghanistan. Far from it – Afghanistan’s venal political class under President Karzai show no signs of getting to grips with the rampant corruption and above-the-law warlords that so corrode Afghanistan’s present and future;

4. With Bin Laden now dead the use of drone strikes is further undermining a failing Pakistan not only critical to the US-led coalition strategy but which is now working to defeat it. And, there is very little meaningful support from the rest of the so-called international community;

5. There is little or no political or popular will back in Western capitals to sustain such an effort. The two key actors, the US and UK, have both made it clear that they need to retrench to fix their ailing economies. The other European members of the coalition never believed in the mission, doing just enough as they saw it to keep the US engaged and paying for much of their own security. All-important unity of effort and purpose is thus a myth. Indeed, the suggestion that some Coalition forces may stay on beyond the end of 2014 is at best fanciful and at worst dangerously misguided; and

6. The gap between the resources available, the use of those resources and strategy-friendly outcomes it generates is now beyond closure.

Therefore, very little that will be done between now and the end of 2014 will make any real difference to the situation in Afghanistan. President Karzai is already doing deals with key Hazara, Pashtun, Tajik and Uzbek ‘politicians’ over a dark future. Afghanistan’s neighbours sit on the periphery like vultures waiting to pick over the bones of a shattered, resource-rich country. Meanwhile, military commanders and their civilian counterparts tick their boxes and file their optimistic command chain reports deluding themselves that they are making real progress. There comes a point when ‘can do’ simply becomes ridiculous. The peace process? What peace process?

And with at least two years to go before all major combat and stability operations end it is likely that hundreds will die and thousands maimed, not to mention the many Afghan and Pakistani civilians who will die alongside them. The Taliban and Al Qaeda? There are other ways to skin those cats.

Afghanistan was always a risk but the essential failing from the outset was to equate ridding the space quickly of Al Qaeda (achieved relatively quickly) with ‘doing good’ by Western liberal criteria and then to organise poorly both the effort and the resources.

Therefore, unless there is a clear reinjection of political capital and resources at the highest levels in Washington and London (forget the rest) to afford our forces all-important mission momentum I can no longer defend the killing or maiming of one more American, British or Coalition soldier.

Failing such a commitment pull our forces out now, politicians. And watch Beaufort. You owe it you our young men and women who have made the supreme sacrifice on your behalf.