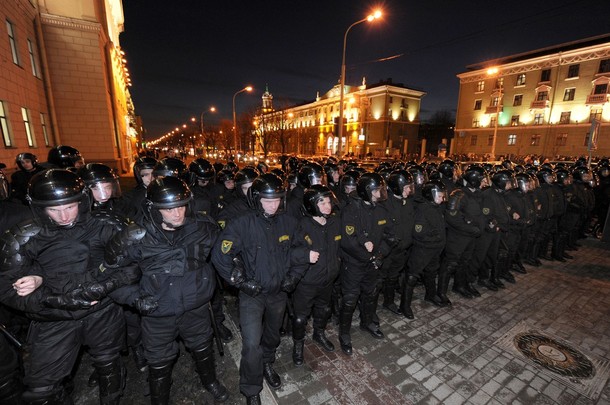 In a bid to ensure its dubious status as “Europe’s last dictatorship,” Belarus has further constrained the rights of its independent journalists.

Last week, the country’s highest court upheld the Justice Ministry’s January 13 warning to Belarus’ largest independent journalistic organization, the Belarusian Association of Journalists (BAJ). According to the ruling, within the next few weeks the BAJ will be required to recall all press passes and cease all legal assistance it provides to its members. In particular, the court decided that the BAJ’s internal Legal Center for Media Protection, which provides legal defense for the organization, exists outside of the Association’s own constitutional mandate and must be shut down. Henceforth, only journalists connected to government-sanctioned media outlets will be legally allowed to brandish press passes.

Experts consider this to be a clear assault on freedom of the press in Belarus. The BAJ’s Chairperson, Zhanna Litvina, further attacked the court’s verdict, declaring it to be contrary to Belarus’ Constitution by forbidding its members from freely pursuing their profession. Both Reporters Without Borders and the Independent Federation of Journalists have also condemned the ruling.

The court’s decision comes in the wake of weeks of government harassment aimed at the organization and its affiliates. On March 16, the government carried out violent police raids on the offices of opposition newspaper Narodnaya Volya and the Charter 97 website. Police also raided the private homes of Charter 97 editor Natalia Radzina and Narodnaya Volya journalists Maryna Koktysh and Iryna Khalip. The authorities seized eight Charter 97 computers in the raids. Members of the BAJ and experts assert that the government crackdown has been motivated by the upcoming presidential election, in which Alexander Lukashenko – in power since 1994 – will run for a third term.

The annual Freedom House index of political and press freedom in the world has listed Belarus as ‘Not Free’ since at least 2002. Today, Russia is the only other European country (not counting the break-away republic of Transnistria), which maintains this dubious distinction.

Belarus’ repressive government is neither news nor controversial at this point. However, this latest government assault on independent press unquestionably shatters, for the time being, any delusions that the European Union may have had about its ability to Westernize its autocratic eastern neighbor.

In May 2009, under Swedish and Polish initiative, the EU inaugurated the Eastern Partnership (EaP). The EaP encompasses Belarus, Ukraine, Moldova, Georgia, Armenia, and Azerbaijan, with the expressed goal of improving their political, economic, and trade ties with the EU. In particular, according to the EU Commission’s Communication on the project, the Eastern Partnership will seek to promote “the rule of law, good governance, respect for human rights, respect for and protection of minorities, and the principles of the market economy and sustainable development,” within these countries.

The Eastern Partnership thus exemplifies how Europe believes it can influence positive change in its peripheral neighbors through the soft power inducements of closer cooperation and economic integration.

Initially, the EaP project seemed to show some promise regarding Minsk. During the summer of 2009, relations between Belarus and the EU warmed, as the two entities discovered a whole range of “areas of mutual interest” to work toward. However, the rapprochement proved to be a mirage as relations soon began to deteriorate. The Belarusian government’s latest attack on its independent media illustrates that the country may be only getting further away from the liberal European model.

The danger of a repressive Belarus, estranged from the rest of Europe, is one that its immediate EU neighbors – Poland and Lithuania – understand full well. Diplomatic relations between Warsaw and Minsk have grown frigid in the past month over the Lukashenko regime’s treatment of the sizeable Polish minority within Belarus. In the current situation, Poland clearly has very limited tools at its disposal to address this conflict other than to issue a formal protest and withdraw its ambassador.

Likewise, Lithuania has objected openly to Belarus’ plans to build a Russian-model nuclear power plant just 50 km from Vilnius. However, while Belarus refuses to embrace European norms of cooperation, there is little that Lithuania can do to affect the matter.

Meanwhile, the threat associated with the unreliability and lack of transparency of Belarus (and Ukraine) as transit countries for Russian oil and gas are now constantly on the EU’s mind. It is thus in Europe’s highest interest that Minsk fully accepts and adheres to Western values and norms of good governance, transparent economic relations, and human rights. Only then will EU Member States be able to resolve their disputes with Belarus in as civil and non-confrontational manner as they are able to with their other European neighbors.

To achieve such a ‘Europeanized’ Belarus, the West – the EU and the US, as well – will need to do more to support the opposition since their ability to affect the Lukashenko regime directly has been unsuccessful. In spite of the Lukashenko regime’s best efforts, a fragile opposition still survives in Belarus. On March 25 – Belarusian Freedom Day for opposition groups – around 2,000 activists organized an anti-Lukashenko protest in Minsk despite the government’s pre-emptive ban. The oppositionists demanded closer ties with Europe and a respect for democracy, human rights, and the rule of law. Some even draped themselves in the EU flag. These young protesters, political activists, as well as the independent journalists from BAJ and Charter 97 – under ever greater pressure from the government – represent Europe’s only frail hope for seeing a democratic, liberal Belarus reemerge.

The final collapse of Communism in Europe began in 1980 with the Solidarity mass movement in Poland. However, Solidarity’s success was in no small part due to the generous support it received from the United States and the Vatican. Due to Moscow’s constant terror of alleged Western support for ‘Orange Revolutions’ within its “near abroad,” assistance to the Belarusian opposition groups will have to be continued delicately. Nevertheless, it must be increased since President Lukashenko is unlikely to have a change of heart any time soon.