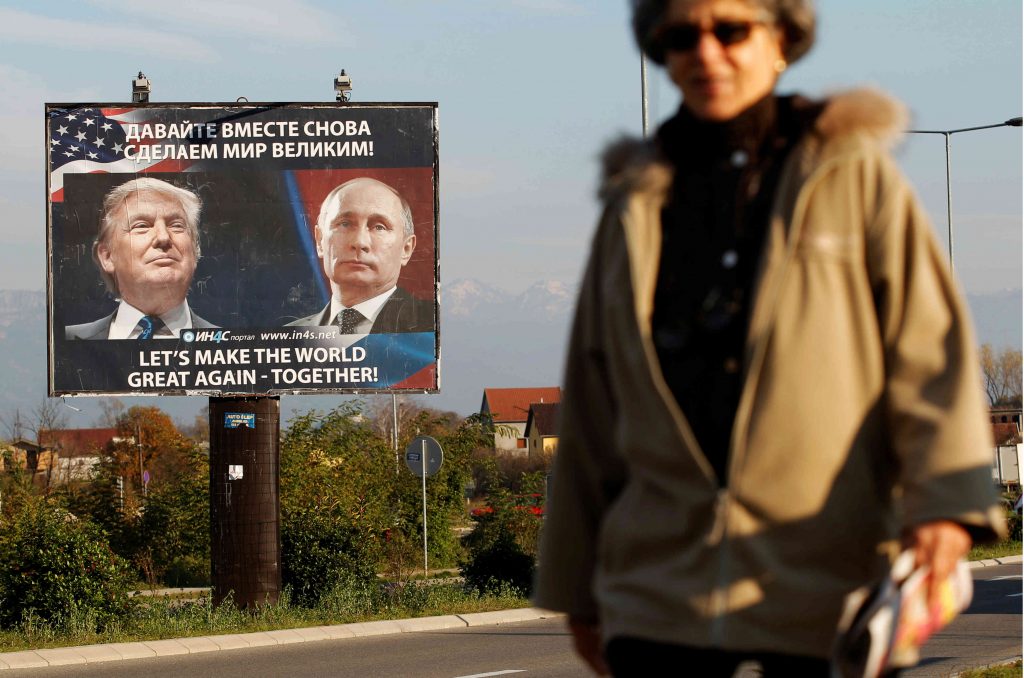 The election which mattered most for Georgia was not the one that returned the incumbent Georgian Dream party to power last month, but the one that took place in the United States last week. Georgia’s leaders were swift to congratulate President-elect Donald Trump and express confidence in the US-Georgian relationship. But privately, they may harbor deep concerns. Trump’s unexpected victory risks upending the strategic goals around which an otherwise-polarized Georgian establishment has largely been able to coalesce: membership in NATO and the European Union as a way of entrenching their security and independence from Russia.

Trump has made no secret of his disdain for NATO, questioning why the US should continue to offer protection to allies that don’t pay their fair share. Nor has he been shy in his admiration for Russian President Vladimir Putin, who describes Georgian membership in NATO as a red line. This is no empty threat: NATO’s pledge at the 2008 Bucharest summit to one day make Georgia a member was followed only months later by Russia’s invasion of Georgia. Even today, any perceived deepening of Georgian ties to NATO is accompanied by Russian sabre rattling.

The concern is that a President Trump, keen to focus on problems at home, skeptical of major US interventions overseas, and desirous of better relations with Russia, will be open to a grand bargain with Putin. The two might agree to carve up the world, Cold War-style, into spheres of influence, with countries like Georgia, Moldova, and Ukraine implicitly abandoned to continued Russian meddling with little or no US objection. The President-elect regards himself as a deal maker: the temptation to make an arrangement with Putin, get rid of a troublesome part of the world, and improve US-Russian cooperation elsewhere is high.

The impact on Georgia’s EU aspirations is less direct, but still significant if Trump’s election, coming on top of Brexit, gives renewed momentum to the rise of other populist, anti-globalization movements in Europe. Enthusiasm for enlargement is already waning.

Any shift in US policy toward Georgia is unlikely to become overt. It would be a hard sell to the US Congress, which still contains many Russia hawks and friends of Georgia, or to the US security establishment, which has invested significant resources in Georgia and appreciates the country’s contributions to the wars in Iraq and Afghanistan. Rather, the new US administration will likely continue to proclaim its support for Georgia’s Euro-Atlantic aspirations and territorial integrity, while doing little to advance these goals in practice.

A painful irony is that these shifts would come at a time when Georgia has again proved its worth as a democracy and haven of stability in an otherwise unstable region through its 2016 parliamentary elections. Georgia has done much the West has asked of it, and more: reforming its institutions, strengthening its checks and balances, tackling corruption, and moderating its rhetoric toward Russia. And yet the closer it comes to meeting Western standards of democracy and human rights, and the benchmarks of EU and NATO membership, the more elusive these goals seem to be. In this potential new scenario, Western policy makers may come to regret their failure to act more decisively when the climate was more favorable.

The good news is that it remains too soon to tell how much of this will come to pass. President Trump—already receiving daily intelligence briefings spelling out the danger of Russian activities to US interests—may turn out to be less radical than candidate Trump. Much will depend on who he appoints as his key national security advisers. Pressure from Russia toward Georgia might recede if Moscow becomes less worried about further NATO (or EU) encroachment into its perceived sphere of influence. But it would not be wise for Georgians to count on this. The converse is equally possible: an emboldened Russia could apply even more pressure on Georgia to bring it back into line.

How should Georgia respond?

First, Georgia should not give up. The logic that has guided Georgian policy for so many years remains just as true today: the best way to ensure its long-term security and sovereignty is by anchoring Georgia in Western institutions. The route may be even longer and harder, but it is not closed.

Second, the newly re-elected Georgian Dream administration, with its large constitutional majority, should not slow down the reform agenda. Nor should it waste effort on unnecessary initiatives such as amending the constitution to ban gay marriage, already illegal under existing law, or pursue controversial ones like eroding the powers of the presidency. It is encouraging that its current plans include a continuing focus on improving Georgia’s governance, infrastructure, education, and tax systems, all of which should enhance its attractiveness to investors.

Third, with its strong mandate, the government should take a fresh look at policy toward Abkhazia and South Ossetia and be willing to consider an even bolder engagement strategy with these breakaway territories. Abkhazia has no desire to give up its hard-won independence, as it sees it, from Georgia, only to become a vassal state of Russia. But if Tbilisi continues to pursue a punitive approach, Abkhazians will be forced to rely even more on Russia. Actively supporting more educational opportunities in the West for Abkhazia’s frustrated young population would be one good place to start, as well as facilitating more trade with the West.

Fourth, the government must meaningfully improve its strategic communications to ensure that Georgia stays on Western policymakers’ radar screens. Given the current geopolitical realities, it needs to focus less on its explicit goals of EU and NATO membership, and more on the underlying argument that a strong, independent Georgia remains good for the security of Europe and is a necessary element of a common long-term strategy to deter further Russian aggression.

Tbilisi could devote more effort to developing its bilateral relationships, akin to the strategic partnership it has with the US. It should spend less time lobbying EU and NATO officials in Brussels and Strasbourg, and more time cultivating political and opinion leaders in individual member states—especially Germany, now the standard-bearer for liberal democracy in Europe. Georgian officials should also worry less about the protocol implications of who they get to see in each country and be willing to work the corridors of power at every level.

Finally, the ruling Georgian Dream and the main opposition party, United National Movement, need to move beyond the rancor and divisiveness that have marked their relations. Georgia’s recent elections were far from perfect. But there is no question that Georgian Dream won a clear mandate to run the country for a second term, and that the United National Movement remains Georgia’s second most important political force and legitimate opposition. Both parties have an opportunity to put the past behind them, accept the validity of each other’s existence, and work together to advance the national interest. It helps that Georgia’s new parliament contains several highly articulate, talented new faces on both sides of the aisle.