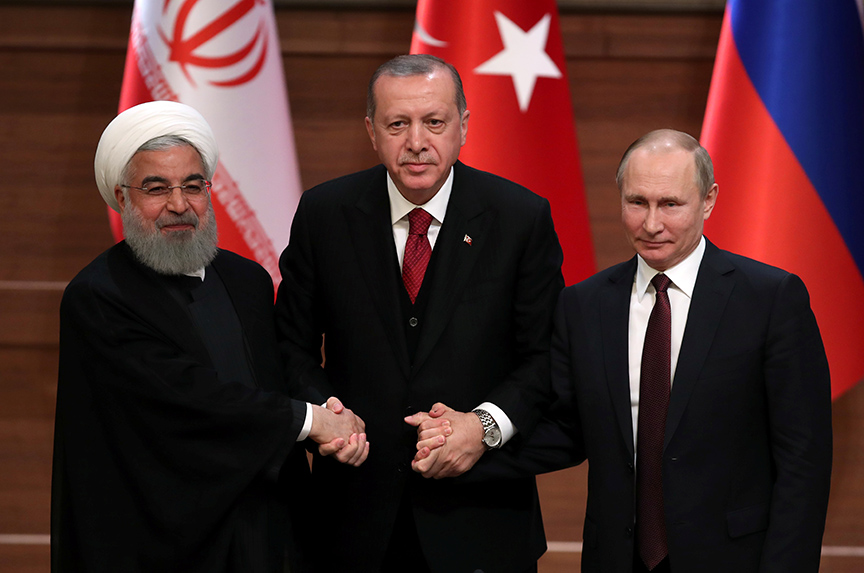 Syria’s civil war has come close to provoking direct kinetic clashes between the United States and Russia. Yet, despite the urgency to understand both sides’ goals, hardly anyone is assessing Russia’s overall objectives in the Middle East. Syria might be the most urgent issue of what the late Zbigniew Brzezinski called the Eurasian Balkans, but it is not the sole issue or focus of Russia’s Middle East policy.

We must urgently grasp the nature of Russia’s goals. Without understanding the facts on the ground, the United States will be unable to forge a coherent strategy or policies to implement any strategy for the Middle East.

Russia’s abiding domestic priority is to constantly appear to be a vigilant, strong, and global great power fighting off what it sees as Western threats to undermine the state.  Domestic support for Russian President Vladimir Putin is a narcotic that must constantly be administered to sustain the idea that Russia remains a great power under siege and that Putin, like St. George, is resolutely fighting the various dragons that are assaulting it—in this case Islamic terrorism and what Moscow perceives as US promotion of revolution, but what Washington sees as democracy promotion.

This objective is a constant across the spectrum of Russian foreign policy. There is a belief in the Kremlin that if Russia does not play a great-power role in areas of vital interest like the Middle East, it will be nothing—something like the medieval appanage princedoms of Muscovy, the object and not the subject of world politics.

In its absence, Moscow must combat Western efforts to oust Syrian leader Bashar al-Assad and threaten Iran using all instruments of power at its disposal. In this context, Moscow cannot allow itself to be captured by any other state’s agenda. Its weaknesses oblige it to find partners against the United States. Therefore, Moscow pursues engagement with everyone, but at arm’s length.

Russia’s key objective is forging an anti-US bloc. It is no accident that the current bloc of Russian friends—Iran, Iraq, and Syria—resembles the anti-Camp David Rejectionist Front of the 19070s or largely a Shi’ite or renegade Sunni bloc.

At the same time, Russian engagement with Saudi Arabia and the United Arab Emirates is crucial for several reasons.  Moscow must work with these states to ensure higher energy prices. This is vital given the centrality of hydrocarbons to Russia’s overall economic health and programs.

Russia’s engagement with the Arab Gulf states is also critical because Moscow seeks to prevent conflict between its partner, Iran, and these Sunni states and Israel. Any such conflict would bring the United States back into the picture in a big way and offer Washington the opportunity it has steadfastly fumbled since 2013 to devise and implement a strategy for the Middle East that marginalizes Russia. These considerations also explain Moscow’s effort to befriend both Israel as well as its enemies—the Iran-backed terrorist groups Hamas and Hezbollah.

Another reason Russia sustains ties with the Arab Gulf states is that through their support, investment, and trade, Moscow can obtain funding and investment that circumvents Western sanctions. Higher energy prices also sustain this objective while ensuring Moscow’s overall economic health and greater economic leverage over Europe through energy exports.

Turkey has been a constant lodestar of Putin’s policies in the Middle East. For years, the Russian president has endeavored to repair Russo-Turkish relations, clearly intent on reducing and, even now, negating Turkey’s adhesion to NATO. Putin has built enormous economic leverage in Turkey through energy (hydrocarbon and nuclear) sales and now weapons deals.  Despite the tension in 2015-2016 following the downing of a Russian jet by Turkey on its border with Syria, Putin has forged a very close personal relationship with Turkish President Recep Tayyip Erdoğan. Putin supports Erdoğan’s apparent efforts to establish a political system in Turkey that resembles his own.

Turkey is, therefore, an example of Russia’s larger policy since energy and arms deals correlate regionally with agreements to allow Russia access to ports, naval and air bases, and other facilities that frequently turn into Russian bases. Apart from Tartus in Syria, Moscow now seeks bases in Egypt, Libya, Sudan, Yemen, and apparently has access to Hamedan air base in Iran.

In broader geostrategic terms, the use of all the instruments of power, diplomacy, information, arms sales, energy deals, direct force, and the incessant exploitation of every ethnic and religious cleavage that can be found in the Middle East serve the purposes of domestic consolidation of the Russian state.  This is because to the degree that Moscow can pose as a great power in world affairs, Putin’s standing is magnified at home. It also serves Russia’s broader international strategy, which is to exploit or create regional crises wherever possible to force itself back into the picture as a great global power that must be part of the resolution of those issues.

Essentially, Moscow seeks to exploit crises to create a regional bipolarity against the West in the Middle East and Europe as well as in places like Latin America or Afghanistan. This would force the United States and its allies to take Russia at Moscow’s own self-valuation and cement a system of global multipolarity (with China and the United States) that accords to Russia the status of a great global power whose voice must be heard.  But in few, if any, cases, Moscow seeks responsibility for guaranteeing a lasting status quo.  Rather, as the American political scientist Robert Legvold wrote more than twenty years ago, “Russia seeks status not responsibility.” The Middle East may be (even beyond Ukraine) the most calamitous example of that obsessive search for status.

Russia’s craving for status cannot be challenged only in Syria. Rather, it must be confronted on a regional basis through a coherent US strategy. For all the Trump administration’s bluster, the distinguishing feature of its Middle East policy is not power but incoherence.  As long as this remains the case and we fail to grasp Moscow’s foreign policy objectives, creating order out of the current chaos will remain virtually impossible.

Stephen Blank is a senior fellow with the American Foreign Policy Council.