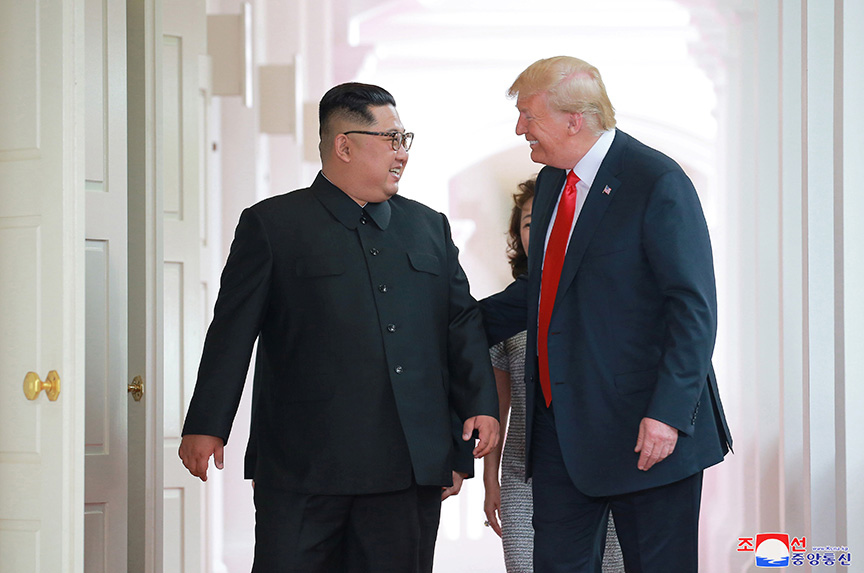 In the wake of US President Donald J. Trump’s June 12 summit with North Korean leader  Kim Jong-un, R. Nicholas Burns, an Atlantic Council board member who served as US undersecretary of state from 2005 to 2008, discussed the tough work that lies ahead and lessons from a not too distant past.

Burns spoke in a phone interview with the New Atlanticist’s Ashish Kumar Sen. Here are excerpts from our interview.

Q: What to you was the most significant outcome of the Trump-Kim summit?

Burns: President Trump was right to turn toward diplomacy. He is right to try to determine whether through negotiations we can eliminate the threat of the North Korean nuclear weapons program to the United States. Remember where we were seven or eight months ago? There was a strong possibility of some kind of conflict between the United States and North Korea because of what the North Koreans were doing. I credit President Trump with turning toward diplomacy in the last few months. I was one of the people who felt he was right to go to Singapore.

Obviously, the tough part of this has begun with [US] Secretary [of State] Mike Pompeo’s trips to Seoul and Beijing. This is going to be a very tough negotiation with the North Koreans. The joint statement [that followed the Trump-Kim summit] was quite weak. It did not include the kind of tough language that we have achieved in the past with the North Koreans about a comprehensive, verifiable, and irreversible dismantlement of the North Korean nuclear weapons complex.

Secretary Pompeo is going to have to form a big negotiating team and work with Japan and South Korea, hopefully keep the Chinese involved on our side, and keep the Russians from making trouble. This is going to be a very complex and difficult negotiation.

Q: How did the North Korean commitments made in the joint statement compare with their past promises?

Burns: The negotiations that we have tried—most significantly President Clinton’s in 1994, the Agreed Framework, and President George W. Bush’s in 2005—were well-intentioned. The language we were able to elicit from the North Koreans was much stronger than the language of the Singapore statement, but both of those negotiations ultimately failed. We have to recognize that.

The key now to looking at why those negotiations failed is to continue to have leverage against North Korea throughout the negotiations. Secretary Pompeo has been right to say that we are not going to lift the sanctions until the North Koreans have carried out all the commitments that they have promised.

The US position has been undercut, however, by President Trump’s statement that we no longer face a nuclear threat from North Korea. That statement is completely untrue. The North Koreans have not dismantled any part of their nuclear apparatus in the last few weeks. Let’s hope that they will, but they haven’t yet.

When the president said that, it took the pressure off countries like China, Russia, and India from adhering to a strong sanctions regime. If there is no longer a threat then why do you have to have sanctions? You actually saw statements from the Chinese leadership saying now is the time to, in effect, begin to normalize economic relations with North Korea. So [Trump’s] was a very unfortunate statement and it ran contrary to what the Trump administration is trying to do.

Q: Chinese pressure was a significant factor in getting Kim to the table. Is China likely to remain committed to keeping up the pressure on North Korea, especially when it faces pressure of its own from US tariffs?

Burns: That is a very complex equation. You can see that President Trump has tried very hard, with some success, to achieve a consistently good relationship with [Chinese President] Xi Jinping in large part because we need China to help us with North Korea. That is a key variable.

As we go through the negotiations we need to keep the pressure on North Korea. Since we have very little trade, if any, with North Korea we are going to need help from China and Russia.

I found the video produced by the US government to be counterproductive in one respect: it put President Trump and Kim Jong-un at the center of the drama while actually [South Korean] President Moon Jae-in and [Japanese Prime Minister Shinzo] Abe also need to be at the center. Their interests are more profoundly engaged than even our interests. The Trump administration shouldn’t frame this as a drama just between the United States and North Korea. The South Koreans should be alongside us. Our negotiating campaign needs to be inextricably linked to theirs, as well as Japan’s. The framing of this has to be much broader than at least President Trump has done this week.

Q: While North Korea committed to denuclearization, there were no clear timetables in the joint statement. How should this issue be addressed?

Burns: That’s a key question. What Secretary Pompeo needs to do now, with the help of the South Koreans and Japanese and others, is to commitment the North Koreans in writing to a specific timetable and schedule for denuclearization as well as to a deal that we can verify.

Secretary Pompeo has been saying consistently that the United States is not going to agree to any final arrangement that doesn’t include verification at its core. That is positive. But at some point, they are going to have to get the North Koreans to agree to that and then hold them to that.

Q: What kind of timeline is realistic?

Burns: A best guess is that this would take many years to unfold. If you compare it to the Iran [nuclear] negotiations—the North Korean negotiations will be more difficult because North Korea has nuclear weapons while Iran did not– it took ten years for the United States under President George W. Bush and then President Barack Obama to get from an offer to negotiate and the establishment of the P5+1 to a deal.

If that is one marker by which we might predict the future, I think we are talking about an agreement that may not be reached in the Trump presidency. It stands to reason. Most people who know North Korea well believe that Kim Jong-un will not give up his nuclear weapons. What he’s trying to do is to change the goal of the negotiations from a comprehensive, verifiable, irreversible dismantlement of the entire nuclear weapons apparatus of North Korea and all of its nuclear weapons to convincing the United States to live with a North Korean nuclear program under limits and perhaps under partial supervision.

It may be that the United States and North Korea have completely different goals for the negotiations, which will make this doubly difficult.

Q: What lessons can the Trump administration draw from past experiences negotiating with North Korea?

Burns: We are stronger negotiating from a coalition than we are alone. It is vital to have South Korea and Japan in our negotiating process and it is going to be important to have China on board given its political and economic influence on Pyongyang.

This is a multilateral negotiation, not just a bilateral negotiation. The visual imagery of Singapore—the two flags, the two leaders, the video produced by the [US National Security Council]—that is not effective because it doesn’t describe at all what needs to happen and that is that North Korea needs to be pressured by a large group of countries to do what it doesn’t want to do.

Q: On the need for a multilateral approach, the South Koreans were reportedly caught off guard by Trump’s announcement that he was suspending joint US-South Korea military exercises. How will that play among US allies?

Personally, I think it was tactically unwise for President Trump to agree to the suspension of the US-ROK exercises because these are very important. To trade them away and get nothing in return is an unfortunate tactical beginning to these talks. It shows weakness on the part of the United States, although I am sure that the Trump administration would say that it shows the kind of flexibility that is required.

What was particularly troubling was that the president adopted the North Korean and Chinese characterization of these US-ROK military exercises as provocative “war games.” It’s not how we have ever described them. These are essential military exercises designed to effectively support our alliance responsibilities for protecting South Korea from North Korea. They are about as important as it gets as a signal of support for South Korea. If, in fact, the Trump administration did not alert the South Koreans and the Japanese to this change, that has hurt us and our credibility with both of those governments.