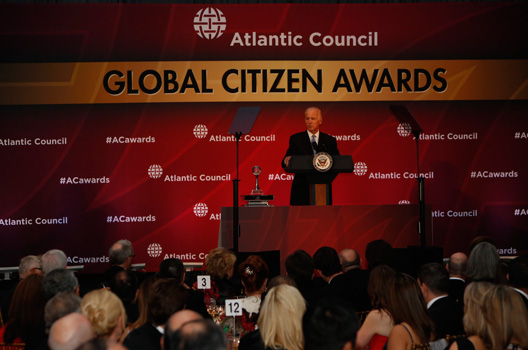 THE VICE PRESIDENT:  If you applaud much more, that whale is going to fall out of the sky.  (Laughter.)

Thank you for that gracious introduction.  I’m going to begin the way no speaker should with an apology.  I am woefully underdressed, and I apologize.  But I had another commitment earlier, and when Adrienne Arsht asked me to do this — I’ve been deathly afraid of Adrienne my whole life.  (Laughter.)  She’s a child compared to me, but her family have been incredibly influential and positive actors in the state of Delaware.

I kid her the reason I got elected, Dr. Kissinger, to the Senate at age twenty-nine, her father was the most prominent corporate lawyer in the state of Delaware.  And I was a young lawyer who was a councilman.  I’m the first United States senator I ever knew.  (Laughter.)  And her father literally sort of leaned down and gave me the blessing and said, I think he would be a great senator and endorsed me.  And I really mean this, I don’t think I would have had a chance had he not been the first consequential, respected figure in the state to endorse me.

And so I owe Adrienne a lot because of her family and all the great things she’s done.

And this Atlantic Council, along with Governor Huntsman, the chairman, and Fred, the CEO, and Adrienne, I want to thank you for allowing me to be here tonight.  (Applause.)

Ladies and gentlemen, to all the honorees tonight—President Draghi, you have an incredibly difficult job you handle with such skill.  And I also—Yu Long, I was saying that if I had the chance to have my picture taken with a peacemaker or a music maker, I choose the music maker.  And you bring such joy to so many people and such pride to your country that it’s an honor to be with you, as well.

We go back a long way.  When I first visited Colombia in the ‘90s, and then in 2000, was, as Dr. Kissinger may remember and Brent Scowcroft and others, drafted out of the Senate Foreign Relations Committee a plan called Plan Colombia.

Colombia was teetering on the brink of becoming a failed state.  The economy was in shambles—the country wracked by violence from drug cartels and guerrilla groups and paramilitaries.

And the idea of peace in Colombia was almost unthinkable fifteen years ago.  So the fact that Colombia has come so far so fast in such a short time in the face of such incredible obstacles, is a testament to the commitment of its leaders and the resilience of its people.

I was proud, as I said, to be one of the architects of Plan Colombia in the Senate.  And I worked with my Republican, as well as Democratic colleagues.  And we knew that it would be a game-changer for both our countries if we could help Colombia move beyond battling cartels to become a strong regional partner.

President Santos and his predecessors have heard me say over the last twenty years, that—I think that Colombia is the keystone to the hemisphere.  This is the first time in any our lifetimes you can look at the Western Hemisphere from Canada to the tip of Argentina and Chile and see a hemisphere that is whole and free and democratic and secure.  We’re not quite there yet, but it’s within our reach.

And it’s within our reach because we have determined men like the man we’re going to honor next.  But it was the Colombian people who did all the hard work and demanded change.  They took ownership of their future.  And our contributions to Plan Colombia was only a small fraction of what the Colombian government did and the chances its leaders took

With hard work and unwavering commitment, the people of Colombia have reclaimed their nation.  As I said, back those days, I served on the Foreign Relations Committee.  And during much of this progress, I can tell you, President Santos was there at every step.  In the ‘90s, he was the minister of trade.  And he helped open up Colombia—the Colombian economy, so the Colombian people could take advantage of new opportunities.

As minister of finance in the early 2000s, he helped steer Colombia out of the worst recession it went through in seventy years. As the minister of defense, he oversaw the rescue of three Americans who had been held hostage by the FARC for five years.

And we were so grateful to President Santos, and to President Uribe at the time, that the troops who engaged the rescue and brought our boys home, I had an opportunity to personally thank.

Now, as President, he is working to end one of the longest running conflicts in the world so that the Colombian people can live in greater peace and greater security.

With our bilateral trade agreement, trade between the United States and Colombia has grown by over $40 billion a year.  But there’s no reason that can be doubled or even tripled in the near term if we can — Colombia can deliver on the promise of this peace agreement.

A Colombia that’s at peace is a Colombia that can take full advantage of the use of its land. Farmers can plant their fields without worrying about stepping on landmines.  Citizens can pursue their dreams free of the fears of extortion and kidnapping.  And as a nation, Colombia can continue and contribute more as we take on the global challenges that impact on our future.

I’ve said many times that Colombia’s success is in the overwhelming self-interest of the United States of America.  They’re already an indispensable partner for us in the Americas, especially in Central America.

And I see no limits on what our partnership can accomplish when Colombian citizens are no longer fettered by the violence and strife that continue to exist in some parts.

So let me say as the people of Colombia continue working toward a lasting peace and greater prosperity, the United States will continue to be their strongest ally and their closest friend.

So for his vision for our shared future, for his service to the people of Colombia, for his commitment to peace, it’s my great honor to be able to present to my friend President Santos, the Global Citizen Award.

Ladies and gentlemen, the President of Colombia.  (Applause.)

*Transcript provided by the White House.