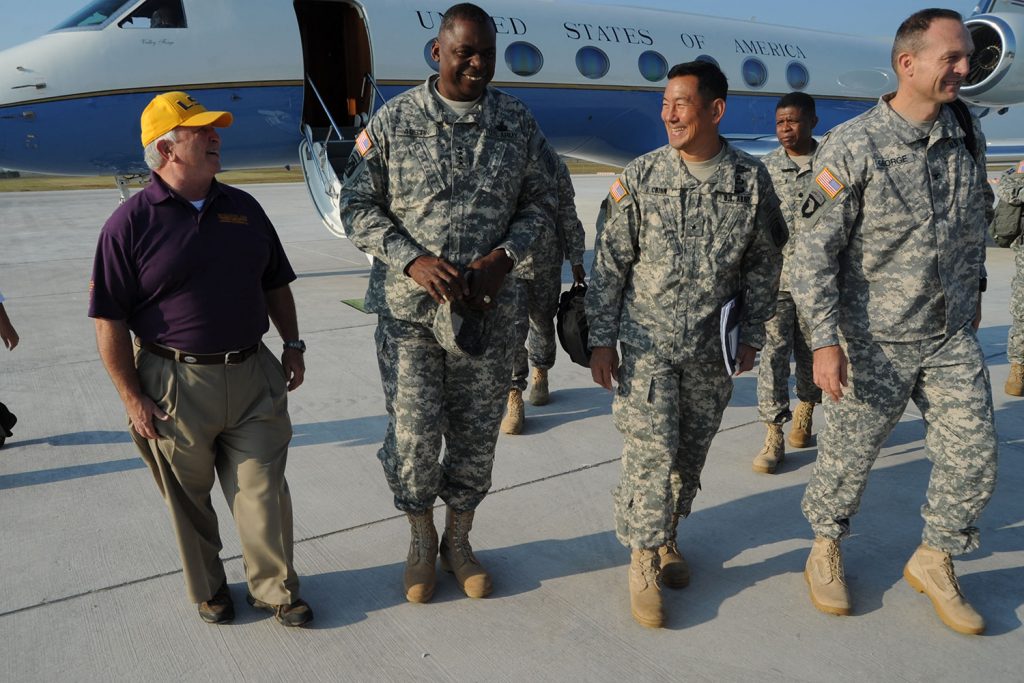 Vice Chief of Staff of the Army Gen. Lloyd A. Austin III, arrives at Alexandria International Airport near Fort Polk, Louisiana, USA. President-elect Joe Biden has chosen retired General Lloyd Austin, who oversaw U.S. forces in the Middle East under President Obama, to be his defense secretary. Photo by US Army via ABACAPRESS.COM

As a commander, Lloyd Austin earned a reputation as a general who could work exceptionally well with civilian authorities, both with the US ambassador when he commanded coalition forces in Iraq and with the White House when he led USCENTCOM. This reputation likely weighed heavily in his selection to be secretary of defense, as President-elect Joe Biden undoubtedly wants to try to avoid the tensions between the White House and the Pentagon that too often strained the Obama administration.

Once confirmed, however, Austin will have serious work to do to reinforce civilian authority in the Pentagon, work that will be made more challenging by his need for a Congressional waiver to allow him to take the job so soon after his retirement. The constitutional principle of civilian authority over the military is a bedrock of our democracy, and unfortunately that authority has deteriorated in recent years. President Donald Trump, who confused civilian authority with personal loyalty, intentionally left key civilian roles unfilled so he could pack the Pentagon with underqualified political cronies. Just as problematic, his first secretary Jim Mattis (who needed to receive his own waiver) was seen to prefer internal processes that favored military advice over civilian expertise. Two years ago the congressionally-mandated, bipartisan National Defense Strategy Commission, concluded that “it is critical that DOD—and Congress—reverse the unhealthy trend in which decision-making is drifting away from civilian leaders on issues of national importance.” It’s worth noting that one of the members of this Commission presently leads the Biden transition team for the Department of Defense.

While some senators will undoubtedly oppose granting another waiver only  four years after the last one, there is little reason to expect that Austin will be denied confirmation. As secretary of defense, therefore, Austin will need to address concerns over the direction of civil-military relations head on. His most important role will be to publicly clarify his intent. This will require both words—which will need to come both during his confirmation hearings and be constantly reinforced throughout his tenure—and in his actions as secretary—where he will need to be widely perceived to rely on civilian expertise, both career and political, and especially that of the undersecretary for policy.

But since personnel is policy, Austin should also take the opportunity to send clear signals about the importance of civilian authority through his recommendations for appointments and nominations. As a first step, he should decidedly not follow in Secretary Mattis’s footsteps and appoint another recently retired flag officer to be his chief of staff—the senior military assistant is a sufficient uniformed presence in the secretary’s immediate office. Moreover, while the deputy secretary’s primary role has typically been running the department’s day-to-day functions, in today’s context such a position might ideally be filled by someone who also possesses a background that could help reinforce civilian oversight over current military operations and force management. Similarly, it will be even more critical than ever that service secretaries (including the assistant secretary for special operations and low intensity conflict) who oversee the service chiefs in building those forces are people who can bring to those jobs a degree of personal authority that matches their newfound positional authority. And more generally beyond the Pentagon, Biden should avoid appointing retired generals and admirals to other traditionally civilian posts, as President Trump did far too often, as those kinds of appointments encourage a command culture that can also undermine the principle of civilian authority.

General Austin’s decades of military service make him well positioned to successfully advise Biden on defense matters. With careful and consistent attention to the messages he sends through his words, actions, and appointments, there is no reason why a Secretary Austin can’t also succeed at reinforcing longstanding American ideals on civilian-military relations.

The Trump administration is right—on civilian oversight of special operations

While the elevation of an assistant secretary of defense may elicit yawns, the move addresses one of the most important issues for any country: how to best secure civilian control over the military.