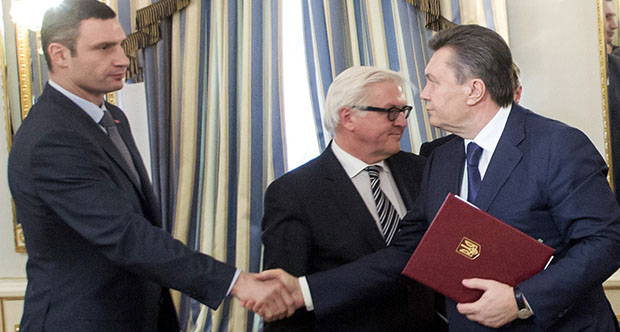 After the bloodiest week of the crisis in Ukraine, President Viktor Yanukovych and opposition leaders signed a deal to bring resolve the political crisis that has plagued the country since late November.

Just yesterday, Secretary of State John Kerry said in a statement, “It’s with anger and anguish that we have watched renewed violence on the streets of Kyiv today destroy more lives and rip apart more families. The people of Ukraine deserve far better than senseless death and suffering on the streets of one of Europe’s great cities.” Reports indicated that as many as 100 people had died in the violent clashes between the Maidan protesters and police. Sanctions against Ukraine were in the works.

“Berkut” in #Dnepropetrovsk hand over the outfit to protesters #euromaidan #Євромадан #Ukraine pic.twitter.com/OEJoX3IbmB

This morning, photos went viral on social media of forty police officers marching to join the protestors. Later in the day, a deal was reached. Foreign Ministers Radoslaw Sikorski of Poland, Frank-Walter Steinmeier of Germany, Laurent Fabius of France; Special Envoy Vladimir Lukin of Russia; and representatives of the Ukrainian opposition, Vitaliy Klitschko, Oleg Tiahnybok and Arseniy Yatsenyuk, negotiated for twenty hours to reach the accord with the Ukrainian government. The news looks promising, but there is a bigger job at hand.

We are about to sign. Good compromise for Ukraine. Gives peace a chance. Opens the way to reform and to Europe. Poland and EU support it.

The EU mediators and Ukrainian opposition leaders still face a challenge in selling the deal to the protest movement based in Kyiv’s Maidan Nezalezhnosti (Independence Square), said Oleh Shamshur, a Ukrainian diplomat who advises opposition party leader Vitaliy Klitschko. The mediators “met with the Maidan council,” a broad, ad hoc leadership group of the protesters, “but the council was not willing to live with Yanukovych as president” for an extended period before new elections, Shamshur said in an online discussion hosted early Friday by the Atlantic Council. Especially after the more than 100 deaths in the violence ignited by this week’s police assaults on the protesters “people are afraid that Yanukovych will bite them, cheat them, again,” he said.

The White House released a statement reiterating the US’s support of the Ukrainian people. “The United States stands with the Ukrainian people as the work to restore peace, security, and human dignity across the country and determine the future course of their country.”

While the agreement did not address the fate of former Ukrainian Prime Minister Yulia Tymoshenko, she is reportedly being released after thirty months in prison. Ukraine’s parliament fired Interior Minister Zakharchenko, the man who executed orders to gun down protesters, but protesters want to see him and others held accountable. A statement from the Pravy Sektor organization says that the deal is missing parts such as the “urgent arrest of (acting Interior Minister Vitaliy) Zakharchenko, commanders of killers in Berkut (riot police), and sniper killers,” as well as the removal of other Yanukovych allies, including General Prosecutor Viktor Pshonka.

“Thus, we are inclined to see this statement of Yanukovych as another attempt at window-dressing. The people’s revolution continues, and it will end with full removal from power,” the group’s statement said.