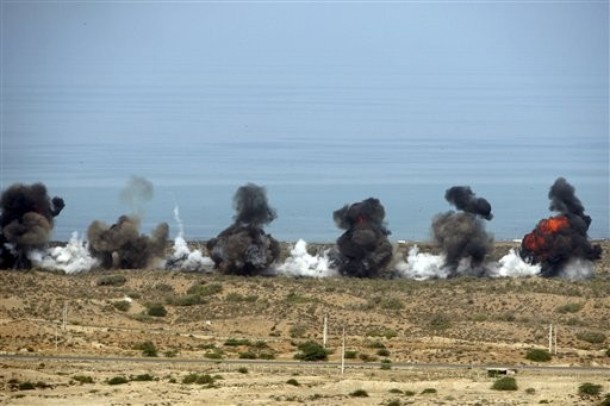 For the first two weeks of August, the Internet buzzed with "inside knowledge" of an Israeli airstrike against Iran’s nuclear facilities before the end of the month. One of most quoted warnings came from Philip Giraldi, a polyglot former CIA operative who writes for the American Conservative and is no friend of Israel.

"We spend $100 billion on intelligence annually and then ignore the best judgments on what is taking place," Giraldi wrote on his blog recently and "might as well use an Ouija board. Not only would we save a lot of money but with an Ouija board there is always the chance you could arrive at the right decision."

Five years ago, Giraldi wrote, "it is hardly a secret that the same people in and around the administration that brought you Iraq are preparing to do the same for Iran."

U.S. Vice President Dick Cheney, he wrote, had tasked the Strategic Command with drawing up a contingency plan in response to another Sept. 11-type terrorist attack on the United States. The plan was for a large-scale air assault on Iran (never mind if Iran wasn’t involved) employing both conventional and tactical nuclear weapons. More than 450 major strategic targets were listed in the plan — evidently leaked to Giraldi by "appalled" senior U.S. Air Force officers.

Tehran’s propaganda machine has taken a leaf out of Bush 43’s lexicon — "bring ’em on." The Pasdaran, or Revolutionary Guards, trotted out their latest acquisition — the 51-foot "Bladerunner," the world’s "fastest warship," capable of 82 mph.

The Iran Times, published in Washington in both English and Farsi, reported only two such "high-tech" speedboats had been built and that Iran was now planning to mass-produce them. The one acquired by Iran was purchased in South Africa and loaded onto a container ship. The Financial Times said the United States was prepared to board it but the operation was called off without explanation.

One Bladerunner was used to set a record for circumnavigating the British Isles in 2005, when it averaged 61.5 mph over 27 hours.

For the past 20 years, Iran’s seagoing Republican Guards have been accumulating small, swift boats with a view to swarming U.S. warships going in and out of the Hormuz Strait, and to mining the narrow waterway used by supertankers that move 40 percent of all seaborne traded oil (which is 20 percent of all oil traded worldwide). Moving through the mile-wide exit channel is also three-quarters of all of Japan’s oil needs.

Iran also has an endless supply of seagoing suicide "volunteers." Hundreds were used to walk across minefields during the Iraq-Iran war (1980-88).

Hormuz is the world’s most important chokepoint and Iran’s principal naval base, Bandar Abbas, is smack in the middle. The Defense Intelligence Agency knows from a former Iranian naval intelligence officer that there are detailed plans to close the strait to supertankers that move some 17 million barrels a day to the rest of the world. Oil would then quickly shoot up from $80 a barrel where it is today to $400 or $500.

In January 2008, five Iranian speedboats darted in and out of a line of three U.S. warships as they entered the Persian Gulf through the Strait, dropping white boxes ahead of the vessels, forcing them to take evasive action.

The USS Port Royal, a 9,600-ton cruiser, the 8,300-ton guided missile destroyer USS Hopper and the 4,100-ton frigate USS Ingraham were prepared to blast the Iranian boats out of the water with close-range, rapid-fire Phalanx Gatlings but word came from the Pentagon to hold their fire.

The white boxes were designed to simulate mines. There is little doubt one or two U.S. warships could have been damaged and the United States would have found itself involved in a third war in the region.

The suicide boat attack against the 8,600-ton USS Cole, at anchor in Aden Harbor in October 2000, which killed 17 U.S. sailors and immobilized a $1 billion warship for two years of repairs, demonstrated vulnerability to small craft laden with explosives.

At the same time, Iran and Russia announced they would begin loading "before the end of August" Russian-supplied fuel into Iran’s first nuclear power plant. A cacophony of tweets amplified Giraldi’s Guns of August scenario.

If Israel has decided to strike against what most Israelis see as an existential threat, it would presumably wait until the U.S. Congress’ return from vacation Sept. 10. A resolution (HR 1553) is winding its way through Congress that endorses an Israeli attack on Iran, which, writes Giraldi, "would be going to war by proxy as the U.S. would almost immediately be drawn into conflict when Tehran retaliates."

Leading neo-conservatives pooh-pooh Iran’s asymmetrical retaliatory capabilities as overblown anti-Israeli rhetoric. Reuel Marc Gerecht, a neo-con commentator, predicts Iran’s response would be minimal and recommends Israel attack Iran to "rock the system" to make the regime "lose face" and suffer a military defeat from which its recovery would be doubtful.

This reporter first began covering Iran in August 1953 when the shah fled a revolutionary upheaval (returning 10 days later after a military crackdown and covert CIA assistance).

There is little doubt that an Israeli attack on Iran would trigger mayhem up and down the Persian Gulf and trigger a third war that would be yet another force multiplier for the U.S. deficit: Federal spending is now at $3.6 trillion; the national debt, $13.4 trillion; cost per citizen $43,000; cost per taxpayer $120,000. Check the debt clock online — in real time.

Gulf and other Arab rulers who wish secretly for aerial bombing action against Iran’s nuclear facilities will be the first to denounce Israel and its only ally when and if the first Iranian target is hit.

Arnaud de Borchgrave, a member of the Atlantic Council, is a senior fellow at CSIS and Editor-at-Large at UPI. This article was syndicated by UPI. Photo credit: AP.