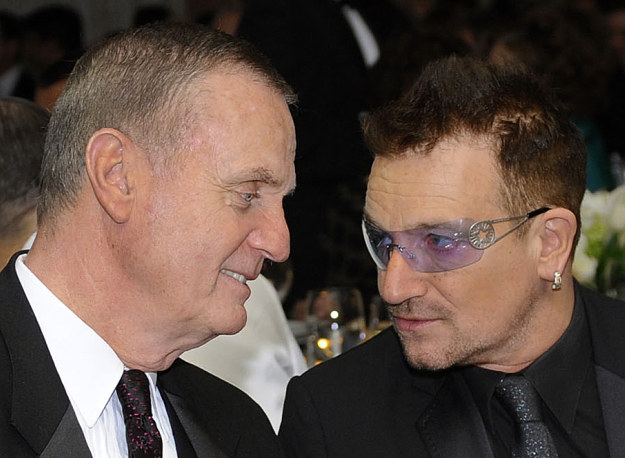 Paul David Hewson, KBE — known the world over  by his stage name Bono — articulated last night, probably as well as anyone I’ve heard on the subject, the crucial interdependence between human development and international security. Recognizing the extraordinary sacrifice of America’s soldiers trying to make the world better, he called on these “peaceniks in fatigues” to fight for more development aid so that they’d have to do less actual fighting.

Bono was honored by the Atlantic Council with its first ever Humanitarian Leadership Award for his efforts over the past quarter century to call attention to poverty in Africa. The Council, founded in 1961 to further the cause of transatlantic relations and, especially, the NATO military Alliance, recently launched its Michael Ansari Africa Center.

And Bono was introduced by Senator John McCain, a genuine hero of the Vietnam war, and with a video featuring several American warriors.

None of this was coincidental.

Bono began his formal remarks, “Now, I look at John McCain, a former military guy; I look out at this audience; a lot of military past and present, a lot of brass, spit and polish. And I wonder who let the peacenik in?”

He continued, “I want to answer the question with a question of my own: Who are all the other peaceniks that are in this room and the ones with the stars and bars on their formalwear? You, because I’m talking to you, military men and women, as well as the politicians who’ve been out there making our argument for us and making it so powerfully: the idea that America has a stake in the ending of extreme poverty. It’s an extraordinary thing to see.”

He recognized his fellow honoree as perhaps only he could:  “that cat Billy Clinton from Arkansas,” who he called “an extraordinary guy who’s – not just his work that he’s done with President Bush in Haiti but negotiating the prices of life-saving anti-retroviral drugs to fight AIDS and making sure that the prices are down or free. He’s really changed the game for us in the fight against HIV/AIDS.”

“And how about that cat, Bob Gates? He’s done a lot of covert work in his time – black ops – but who’d have thought he’d be calling a budget chairman to fight for the 150 Foreign Assistance account? A secretary of defense who hammers Congress for more aid? I mean, are you people on drugs?”

“That other well-known hippie, Jim Jones.”   The National Security Advisor and former Marine Commandant and SACEUR reportedly called Bono some years back to discuss the ONE Campaign.  His motivation was that of any good Marine officer:  To further his country’s interests at the cost of the fewest Marines possible.   Americans were getting killed because they were Americans and it was vital that Americans show show the world what we are for as well as what we were against.  Ultimately, “the fight against poverty reminds the world of American values which in turn helps to make America more secure.”

Bono continued, “I know the cost of life is very real in your world in this room. I can’t even imagine. But what I think Gen. Jones, Secretaries Gates and Clinton, Sen. McCain and others are getting at is that somehow these worlds of defense and development are inextricably linked. They’re not the same thing; they’re very different. But they’re linked and we need to see them as part of the same picture.”

To be sure, “There’s a bright line that separates what we do from what you do, and that’s okay. But our ultimate goals are the same goals, so let’s not work at cross purposes. While the military helps build, keep the peace by supporting the African standby force peacekeeping efforts, development must be an equal but separate partner.”

The problem, Bono contends, is that while there’s growing evidence that national security decision-makers understand this relationship, it hasn’t quite translated into spending priorities.  While there’s much lip service to “the three Ds: defense, diplomacy and development,” the fact is that, ” The last two Ds get a fraction of the government budget compared to the first. “

He specifically noted the proposed $4 billion cut in foreign aid funding being championed by Senate Budget Committee chair Kent Conrad and called on the assembled “peaceniks in combat fatigues” to stand up against this move.