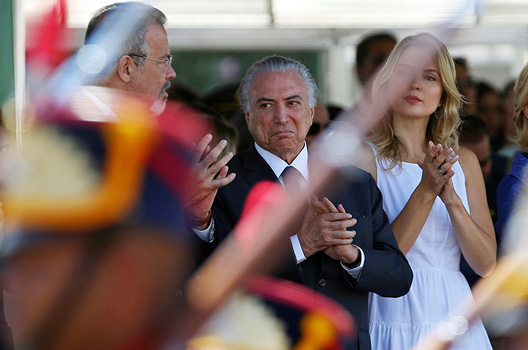 Brazil’s interim president, Michel Temer, attends a meeting with defense officials regarding the security of the 2016 Rio Olympics at the Planalto Palace in Brasília on May 16. (Reuters/Ueslei Marcelino)

A year ago, Dilma Rousseff, the former president of Brazil, and Eduardo Cunha, the former speaker of the House of Representatives, were involved in a public duel that threatened the pillars of the republic. Today, both have lost their jobs. That doesn’t mean that a turbulent chapter in Brazil’s history has ended. Now begins an arduous battle in which the country’s controversial new leaders must pass the reforms needed to get Brazil’s economy growing again. Although the challenges are considerable, Brazilians have reasons to be optimistic.

Barring some big scandal, President Michel Temer’s government is here to stay. That fact brings a sense of stability to Brazil after months of political uncertainty. Although there are legitimate concerns about the way Rousseff was impeached, we finally know who will lead the country until 2018. The impact of this knowledge should not be underestimated: Brazilians can finally plan their lives with more confidence and focus their efforts on the economic challenges.

More importantly, the Temer administration has wasted no time in moving forward. Eager to show how it plans to get Brazil back on track, it has begun tackling some of the country’s most important problems. Temer has announced he will send Congress a bill in September to reform the Brazilian pensions system. Since July, he has been negotiating a bill to cap public expenditures. The administration is also moving ahead at full speed with plans to revamp investments in infrastructure, which include offering new concession models to international and domestic private investors. The focus is on ports, airports, and roads—areas that are ripe for expansion and offer great potential for a good return on investments. The government has even announced its intention to redo some bids awarded in 2013 and 2014, whose winners did not fulfill their promises.

This sense of urgency toward action is a positive sign. It shows a willingness to address historic problems and gives the Brazilian public time to discuss the proposed reforms.

It is true that the Temer’s reform program is not much different from Rousseff’s. The difference lies in its actual chance of success. In her brief second term, Rousseff lacked the political capital necessary to push forward her reform agenda. While it is unfortunate that Brazil had to go through a questionable impeachment before addressing the economic crisis, Temer is a better dealmaker than Rousseff. Now, he has two additional advantages: One, his mandate has become permanent and he no longer needs to pander to senators. And two, Cunha can no longer hold Congress in gridlock.

Additionally, Brazil is changing its stance on opening its economy to global markets. Until now considered one of the most closed economies in the Americas, commerce and foreign affairs leaders in Brazil have launched a concerted effort to strengthen ties with the United States and Europe, as well as to make trade deals easier to negotiate. This process, which started under Rousseff, will likely intensify. Brazil signed new trade agreements with Colombia a year ago and with Peru in April. It is also advancing its commercial dialogue with the United States and the European Union.

Temer will face a tough battle in his bid to change labor laws. It is important to understand that the core of Brazil’s labor legislation, enacted more than six decades ago, might never come up for debate. What the administration has suggested is to increase the scope of what can be decided in negotiations between employers and employees, and to also allow the use of third-party contractors for activities currently off limits. Needless to say, trade unions representing workers squeezed by the recession are understandably afraid of losing any rights and are readying to do battle to prevent any change to the labor laws.

While the government will not get everything it wants, there is good reason to believe that at least pensions and public expenditures reform will pass. This means there is now greater disposition to face structural issues than at any time in the recent past.

Steering Brazil back to a positive trajectory is by no means an easy task. There will be bumps in the road. The biggest challenge will be healing the political wounds inflicted during the process that led to Rousseff’s impeachment. Although Brazilians may benefit from the sense of stability created by the end of that impeachment process, many are disappointed by what they saw as being an improper replacement of Rousseff by Temer, her vice president. Calls for early elections have not subsided. Temer has yet to convince a large portion of Brazilians of his own legitimacy.

One could spend a long time describing the reasons for pessimism in Brazil, but most polls show a gradual and steady improvement in people’s confidence that the economy will recover. The debate sparked by Rousseff’s impeachment will ultimately benefit Brazilian democracy. As long as the government keeps creating concrete and substantive changes, there is reason to be optimistic about Brazil’s future.

Andrea Murta is deputy director in the Atlantic Council’s Adrienne Arsht Latin America Center. You can follow her on Twitter @murta30.