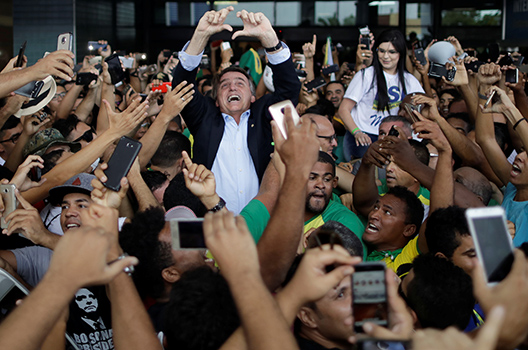 Federal deputy Jair Bolsonaro, a pre-candidate for Brazil's presidential election, is greeted by supporters as he arrives at Luis Eduardo Magalhaes International Airport in Salvador, Brazil May 24, 2018. (REUTERS/Ueslei Marcelino)

In October, voters will have the opportunity to elect a new leader in Brazil, on the hope that the next administration will turn things around for a country still facing economic uncertainty, deep political polarization, and a wide-spread corruption crisis. “We are looking at a new chapter for Brazil,” Roberta Braga, Associate Director of the Atlantic Council’s Adrienne Arsht Latin America Center said in an August 16 conference call.  While currently “the general mood in Brazil is very negative,” according to Ricardo Sennes, nonresident senior Brazil fellow at the Adrienne Arsht Latin America Center, voters will have the chance to pick a president who can address the challenges of high unemployment, political reform, and increasing crime rates.

The first round of the presidential election in Brazil will be held on October 7, with an expected run-off on October 28. The current front runner in opinion polls, former President Luiz Inácio Lula da Silva, is currently in jail on a twelve-year sentence for corruption, having been indicted as part of the “Car Wash” corruption scandal that has rocked Latin America’s largest country.

The Workers’ Party (PT) has nominated Lula as their candidate, despite a pending confirmation by Brazil’s electoral court on his eligibility to run while imprisoned—an unlikely scenario. On August 6, the PT announced they would run Fernando Haddad, a former minister under both former President Dilma Rousseff and Lula, as their candidate should Lula be disqualified from the ballot. Despite acknowledging this possibility, many PT leaders and activists have stressed that they will not view the election as legitimate if Lula, who they believe was unfairly targeted and scapegoated by authorities in the corruption scandal, is not allowed to run.

Current President Michel Temer is not running in October, despite leading the country for two years after replacing the impeached Rousseff. Temer struggled in his term to gain a sense of legitimacy and had to fight off serious allegations of his own misconduct during a corruption investigation. His primary successes, a new labor law and a constitutional amendment to limit public spending, have helped to stabilize Brazil’s faltering economy, but the reforms remain deeply unpopular with many Brazilians.

Although the field remains divided, Lula or Haddad’s primary rival will be right-leaning Army Reserve Captain Jair Bolsonaro, who has gained notoriety for a string of controversial remarks and tough measures proposed to address Brazil’s security concerns. Other leading candidates include former São Paulo State Governor Geraldo Alckmin of the Brazilian Social Democratic Party (PSDB), former Minister of the Environment Marina Silva of the Sustainability Network Party (REDE), and Ciro Gomes, former minister of finance and member of the Democratic Labor Party (PDT).

According to Henrique Rzezinksi, a member of the Board of Trustees at the Brazilian Center for International Relations (CEBRI), “unemployment [will be] one of the main drivers of the election,” as the jobless rate continues to be stuck around 12 percent in Brazil. Brazil’s economy has recovered mildly from the dark days of recession in 2015 and 2016, but danger remains. Lingering labor disputes still threaten to hobble the country, such as the trucker strike in May that sent ripples throughout the Brazilian economy.

Thanks to increasing yields in other developed countries, investors have been pulling money out of Brazil, causing the real to drop almost 20 percent this year. The decline in the real is further exacerbating Brasilia’s budgetary woes, which Roberto Teixeira da Costa, a member of CEBRI’s Board of Trustees and president of the Market Arbitration Chamber at B3 exchange, noted is “the most vulnerable point of the Brazilian financial situation.”

Frustration in Brazil’s ruling elites, specifically after the “Car Wash” revelations, has bred deeper political polarization and raised the profiles of smaller party candidates such as Bolsonaro. There is a “very strong anti-establishment” sentiment in the country right now, which is “pushing the voters toward more simplistic and populist answers,” according to Sennes. “The changes are not coming,” said da Costa, adding, “the people are disillusioned.” Da Costa stressed the importance of the concurrent elections for Congress, which needs “a renewal and new blood.” In years past, Congress could normally be relied upon to go along with the reform program of a new president, but current polarization makes that far from certain.

According to Sennes, the candidate who is able to deliver on two central issues, the economy and security, will be successful in October. Opinion polls indicate that almost 30 percent of the electorate is still undecided and “if the candidates present themselves as trustworthy and able to make tangible progress on these two agendas, he or she will be very appealing to the voters,” Sennes said.

“Like it or not,” Adrienne Arsht Latin America Center Associate Director Roberta Braga said, “Brazil finds itself at an inflection point.” While the challenges remain great and politics continue to prove divisive, she argued, “this is also a moment of opportunity for Latin America’s largest democracy. The next president will have opportunities to work toward increased investment, regional cooperation, and new levels of leadership in the region….” Brazilians must now take the time to determine who out of the crowded field is best positioned to seize on these new opportunities.

Ahead of the first presidential debate on August 9, the Adrienne Arsht Latin America Center released a Spotlight publication outlining the potential impacts the leading candidates’ positions may have on economic and political reforms, foreign direct investment, and security. Read the Spotlight here.