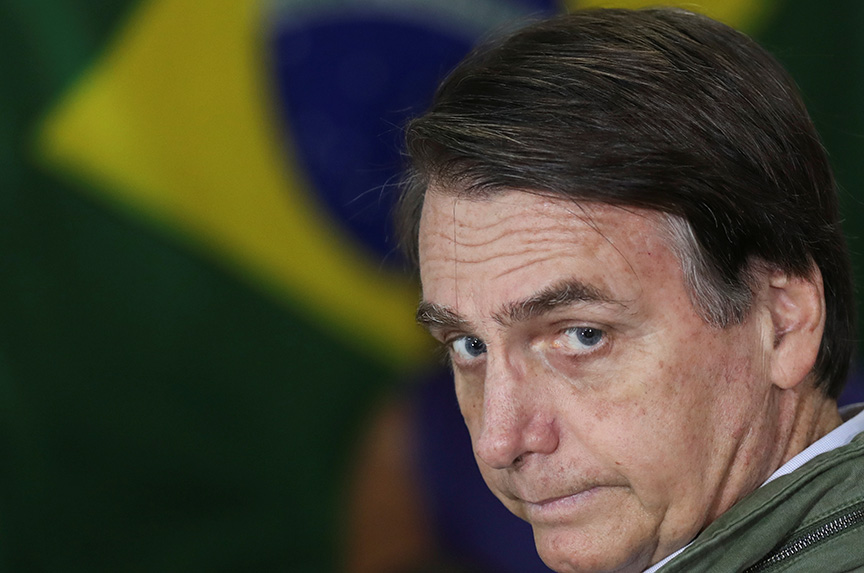 For the first time since the early 2000s, Brazilians have elected a president that does not belong to the Workers’ Party (PT).

On October 28, Brazilians elected as their president Jair Bolsonaro, a populist former army captain who has served as a member of the Chamber of Deputies representing the state of Rio de Janeiro since 1991. Bolsonaro, who belongs to the Social Liberal Party (PSL), defeated his PT rival, Fernando Haddad, in a runoff election after a highly contested election. Bolsonaro won 55.1 percent of the votes against 44.9 percent for Haddad.

“Together we will change the destiny of Brazil,” Bolsonaro said in a video posted on his Facebook page shortly after the election was called on October 28 night.

“President-elect Bolsonaro will be tasked with trying to bring Brazil in a new direction. Questions remain, however. Jair Bolsonaro must show from the get go that he is a leader who will govern for all of Brazil, and must continue to move Brazil forward in the positive trajectory Brazil is destined for in the years to come. And, at a time of much uncertainty in the hemisphere, most notably the crisis in Venezuela, Bolsonaro must seize an opportunity to work with leaders in the hemisphere on an issue that is going to define the future of security the hemisphere,” he added.

Bolsonaro, 63, is a controversial figure. He has a history of making incendiary remarks about women, minorities, and gays; but he has also promised to get tough on crime and corruption in a country that is plagued by both.

Crime, corruption, and the economy

“Brazilians are hoping Bolsonaro’s victory will mean a change in at least two key areas: security and the economy being at the top of this list,” said Roberta Braga, an associate director in the Adrienne Arsht Latin America Center.

Pointing to the high levels of violent (and often deadly) crime in Brazil, Braga said: “A lot of Brazilians look to Bolsonaro to bring some degree of order to the country. This means many are willing to accept, and at times overlook, the heavy-handed approach he has advocated to addressing the problem.”

Bolsonaro, who survived a stabbing on September 7, has advocated violent retribution against criminals. He is in favor of relaxing gun ownership laws, described torture as a legitimate practice, and wants to restore the death penalty.

Besides a skyrocketing crime rate, Brazil also has a high rate of unemployment. “Bolsonaro will be expected to implement policies that are different from what the Workers’ Party implemented in the over one decade in which they have governed the country,” said Braga.

Bolsonaro has entrusted his economic policies to Paulo Guedes, a liberal economist. “People are hopeful that with Paulo Guedes at the helm, Bolsonaro will be able to implement policies to curb unemployment and pass very necessary reforms, like pension reform,” said Braga.

But first, Bolsonaro will have to create alliances. “His administration will have to form key coalitions in Congress, including with the PSDB and MDB, and make certain concessions if he hopes to make good on his promises. His political capital will not be infinite,” Braga said. On the campaign trail, Bolsonaro often railed against center-left and center-right parties. While defeated in the presidential vote, the PT still dominates Congress.

Dissatisfaction with the PT was a significant factor in Brazil’s 2018 election.

In the first round of elections on October 7, Bolsonaro won just under 47 percent of the vote—not enough to avoid a runoff. Haddad, his nearest rival, trailed at 28 percent.

Bolsonaro rode a wave of public anger toward the PT—a party that has seen many of its leaders embroiled in a massive corruption scandal. The PT’s original presidential candidate, Luiz Inácio Lula da Silva, a former president of Brazil, has been in jail since April after he was sentenced to twelve years for corruption and money laundering in the Operation Lava Jato (Car Wash) criminal investigation. He dropped out of the race in September after the courts ruled he was ineligible to run. Lula’s departure put the PT’s fate in the hands of Haddad, a former mayor of São Paulo.

“The PT was absolutely a factor in this election,” said Braga. “A lot people went to the polls to vote against the PT. They didn’t want to see another PT president leading Brazil.”

Implications for the US-Brazil relationship

Brazil’s president-elect and the US President Donald J. Trump have similar outlooks on a number of issues. Bolsonaro has mentioned he would shift the Brazilian Embassy from Tel Aviv to Jerusalem, Trump shifted the US Embassy to Jerusalem in May; Bolsonaro is determined to curb Chinese influence in Brazil, Trump is engaged in a trade war with China; Bolsonaro has said he would prioritize bilateral trade agreements over multilateral ones, as Trump has. And just as Trump pulled the United States out of the Paris climate accord in June 2017, Bolsonaro initially claimed he would pull Brazil out of the agreement, until he backtracked days before the election.

While all this may sound like the perfect ingredients for a closer relationship between Trump and Bolsonaro, Braga said both leaders are likely to remain “inwardly focused.”

“It will likely be Brazil first for Bolsonaro just as it is America first for Trump,” she said.

Trump called Bolsonaro to congratulate him soon after the results were declared.

“Had a very good conversation with the newly elected President of Brazil, Jair Bolsonaro, who won his race by a substantial margin. We agreed that Brazil and the United States will work closely together on Trade, Military and everything else! Excellent call, wished him congrats!” Trump tweeted on October 29.

Image: Supporters of Jair Bolsonaro, a far-right presidential candidate of the Social Liberal Party (PSL), celebrated in Brasilia, Brazil, on October 7. Bolsonaro won the first round of the presidential election, but didn’t get enough votes to avoid a runoff. He will now face Workers’ Party candidate, Fernando Haddad, in the second round on October 28. (Reuters/Adriano Machado)