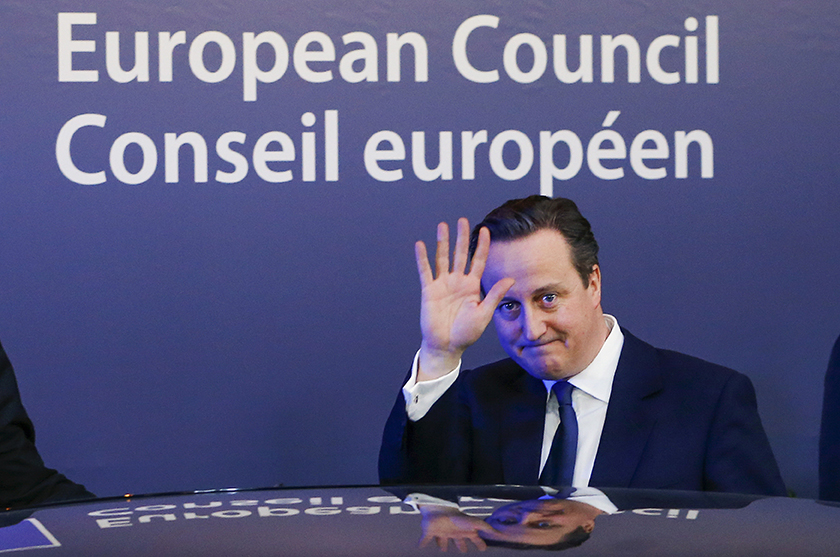 For all the sturm und drang that accompanied British Prime Minister David Cameron’s negotiations with his European partners on February 19, the specific topics addressed—and the points won by the Prime Minister—were remarkably small. The implications of those negotiations, however, could be immense, both for the United Kingdom and for Europe. Whether the British people vote to “remain” or “leave” on June 23, the campaign will be based on competing arguments for the separateness of the United Kingdom from the European Union. If the United Kingdom leaves, it will be striking out on its own in a challenging world.  If it stays, it will do so as a reluctant, ambivalent member, with reduced credibility and influence.

Given the strategic importance of the United Kingdom’s choice, the negotiations centered on very limited points. Child-care support will now be indexed depending on where the child lives, not where the parent works.  If any non-Euro member state, such as the United Kingdom, feels disadvantaged by rules emerging in the Eurozone, that country can take its concern to the EU summit—something that any leader who had engaged actively in the EU could have done anyway. After 2017, the United Kingdom will be able to restrict some benefits to some EU migrants for four years. And the United Kingdom will no longer be aiming for an “ever closer union” with the rest of Europe. This is a core rhetorical flourish of the EU treaties, but given that the United Kingdom already had opted out of several key EU elements—euro, Schengen border-free area, and several judicial and police measures—this confirms an existing pattern rather than sets a new one.

London Mayor Boris Johnson is right when he says this agreement is neither a fundamental reform of the EU nor of the United Kingdom’s relationship with the Union. Yet the claim of having achieved a “special status” for the United Kingdom in a “reformed EU” is a main tenet of Cameron’s argument for staying in the Union. The other argument seen in his post-Brussels press conference is focused on security and influence—that in this dangerous world, the United Kingdom is much better off being able to cooperate with Europe on such things as tracking and arresting terrorists. Cameron is correct. The United Kingdom is undoubtedly much better off in the EU where it can work with others to address key issues ranging from national security to prosperity. But this argument runs directly contrary to the “leave” campaign’s view that security depends on full sovereignty and the United Kingdom’s disentanglement from a Europe that seeks to restrict its freedom to act.

With the referendum now on June 23, we face four months of the rival campaigns seeking to scare the British public into supporting them. For the “leave” campaign, the European Union will be the ogre in the woods, seeking to entrap the United Kingdom in so many rules and with so many disparate partners that it cannot take the sovereign actions that it needs for its own protection. For the “remain” campaign, the EU will be the least-worst alternative for a country that must deal with a world outside that is so nasty that it can no longer cope on its own; the United Kingdom will be engaged to the extent it needs to be, but no more.  World events will undoubtedly play into this debate, but which side they will benefit is anyone’s guess.  A renewal of mass migration into the EU in the spring will help the “leave” campaign, but a terrorist attack that EU intelligence sharing helps to address could swing sympathies toward staying.

As the campaign begins, the polls are evenly split, although the momentum has recently been with the “leave” campaign. But the polls failed to predict Cameron’s strong re-election victory last year. Far more accurate were the bookmakers. And while betting shop William Hill still gives better odds for “remain” than “leave,” most recent bettors have opted to put their money on the United Kingdom leaving. Johnson, London’s popular and effective Mayor, has also made that choice, joining the “leave” campaign.  And, in an unusual move, the Prime Minister has given his cabinet the freedom to choose sides. Several Ministers, including Justice Secretary Michael Gove, have opted for the “leave” campaign.

Referendums are inherently unpredictable. Publics often vote on emotion and respond to last-minute events that may or may not be related to the central question. Yet this vote will shape the United Kingdom’s future for the next generation. If the British people vote to leave, negotiations for divorce will begin and that process will be neither pleasant nor short. Nor is there any clarity about the nature of future relations with the EU as no feasible alternative arrangement has yet been identified. The question of Scotland’s independence would also undoubtedly rise again.

If, however, the British people vote to stay, the result will still be ambiguous. They will not be voting for the United Kingdom to be a central leading member of the EU, but to be exceptional, a country half in and half out. This is not a long-term solution. Indeed, if the “remain” vote wins by only a narrow margin, the “leave” campaign will renew its efforts very quickly. Moreover, the United Kingdom’s European partners want an engaged Britain, not a cranky country always pleading for special rules for itself.

But the terms of the debate have now been set.  As shown by his own re-election, Cameron is an excellent politician. Let us hope—for the sake of the United Kingdom, Europe, and the United States— that he will once more lead a winning campaign.

Image: British Prime Minister David Cameron waves as he leaves a European Union leaders’ summit in Brussels on February 20. Cameron said he would campaign with all his “heart and soul” for the United Kingdom to stay in the European Union after he won a deal about the so-called Brexit in Brussels, which offered his country “special status.” (Reuters/Yves Herman)