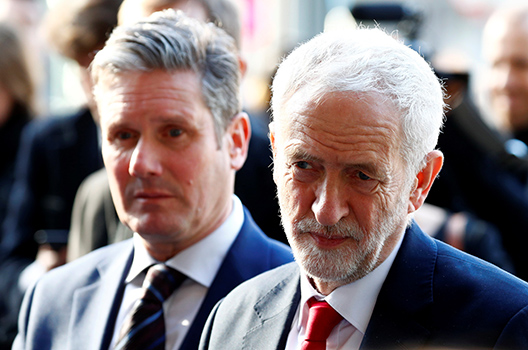 Within twenty-four hours both the British Prime Minister and the Leader of the Opposition have backtracked on major policy issues concerning Brexit. And in both cases, the question is whether they are actually committed to their declared change of course.

Prime Minister Theresa May told Parliament on February 26 that if she failed to secure parliamentary approval on March 12 for her agreement to leave the EU then the next day she would introduce a motion that would allow Parliament to rule out leaving Europe without a deal. If that also failed, then on March 14 she would introduce a further motion providing for Britain’s exit from the EU to be delayed – for a short and limited period – from the currently planned departure date of March 29.

For a prime minister who has steadfastly refused to take a ‘No Deal’ Brexit off the agenda and who has persistently insisted that the UK will leave the EU on March 29, this was a remarkable volte-face.

Or was it? Nothing is quite as it seems. At first, it looked as if this represented a triumph for those who once wanted – and perhaps still do – Britain to remain in the EU. After all, six of May’s own government ministers had threatened to defy her and vote for amendments aimed at ruling out a No Deal exit and/or extending the departure deadline beyond March 29 if she persisted in her previous obduracy. In addition, it now looks as if her comments have secured the withdrawal, at least for the time being, of two amendments intended to achieve these objectives that were expected to be put before Parliament on February 27, when it debates a neutral motion put forward by the government concerning the continuation of Brexit negotiations.

But ‘Remainer’ MPs from both the ruling Conservative Party and the opposition Labour party soon wanted time to look at the fine print. But where was the fine print?

May refused to expand on the implications of her backtracking, leaving two key questions unanswered. First, what action might she take if Parliament reduces her options to a straight choice between a delay to Brexit and leaving with no deal? Second, would she nonetheless try to bring the Withdrawal Agreement agreed with European Union, with some suitably mollifying fresh phraseology surrounding it, back to Parliament later in March, once the European Union has formally approved it at its next summit on March 21 – 22?

Then there is Labour. Late on February 25, Labour’s leadership started circulating a briefing note to its MPs detailing the amendment it is planning to present to Parliament on February 27 setting out its preferred route for settling the Brexit crisis.

This envisaged a permanent and comprehensive customs union with the EU coupled with ‘close alignment’ with the EU’s single market. But the sting in the tail was that it also said that if Parliament rejected this amendment, Labour would push for a second referendum. And the options in this new poll would be, on the one side, whatever deal May was able to secure and, on the other, remaining in the EU.

Since it almost certain that Labour’s customs union amendment will not win parliamentary approval, this should mean that Labour really will push for a new referendum. But Corbyn has long declined to voice any real support for a new poll and there is no reason to believe he has changed his mind.

Given current parliamentary arithmetic, a straight vote for a second referendum would probably fail by forty to fifty votes, not least because it would not be backed by perhaps twenty -twenty-five Labour MPs in seats which voted ‘Leave’ in the original 2016 referendum.

And there is no indication that Corbyn is prepared to back the one method of really ensuring such a poll that would seem to have a chance of securing a majority in Parliament. That is a proposal by two of his own MPs, Peter Kyle and Phil Wilson, that would offer Labour support for any Withdrawal Bill May might seek to secure in Parliament provided that such an agreement was subsequently confirmed in a fresh referendum before it became law.

Seen in this light, the referendum reference in the briefing note is essentially a tactical move to ensure that no more Labour ‘Remainer” MPs follow the eight who left the party last week to form the new Independent Group in Parliament.

But while this may be rationale of the tight group of aides dubbed ‘Team Corbyn’ that surround the Labour leader, it is not necessarily the view of party members, party MPs at Westminster, or even, perhaps, of his own shadow cabinet. In general, Labour voters, members, and MPs still favor the ‘Remain’ cause. Naturally, they tend to back a second referendum that would give them to chance to keep the UK inside the EU – and they will campaign, fiercely, both inside the party and in the country at large, to secure a new vote.

Exactly what happens next therefore remains just as much a guessing game as ever. But there are some interesting signals coming from non-political sources. The increasing likelihood that the UK will not leave the EU on March 29, if only because of the need for extra time to process the vast amount of legislation required for actual delivery, on February 26 sent the pound sterling to its highest level against the Euro in two years and its highest level against the US dollar for three months. That’s an indication that business at least welcomes any delay, no matter how short.

And there are the bookmakers, who will take bets on anything. One leading bookie, William Hill, today said that a second referendum before the end of 2020 is now “probability rather [than] a possibility.” And that seems to reflect a particularly European view of Brexit, that the best thing is not just a delay of a few months, as May now seems ready to contemplate, but a delay lasting for the best part of two years.