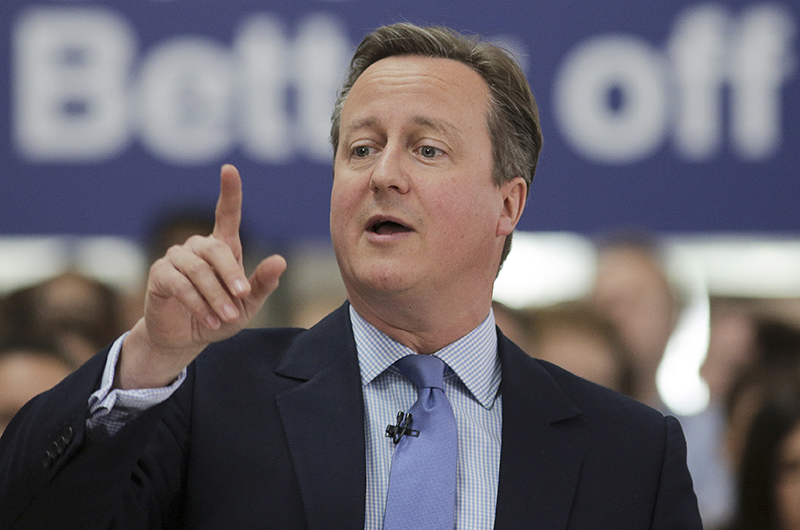 British Prime Minister David Cameron delivered a speech in Chandler’s Ford on May 23 on the economic impact of the United Kingdom leaving the European Union. (Reuters/Daniel Leal Olivas)

Turkey has, quite unexpectedly, become a core issue in the United Kingdom’s referendum on membership of the European Union, prompting British Prime Minister David Cameron to effectively call one of his junior ministers a liar for saying the UK has no veto on Turkey’s entry into the EU.

While those who favor the UK’s exit from the EU, or Brexit as it is known colloquially, make wild accusations that staying in the EU will lead to a million Turks entering the UK in the next eight years, there is only the slightest sense of a real debate about whether Turkey is actually likely to meet EU membership standards.

In the UK, the issue revolves around the direct contradiction between a statement by the UK’s Minister of State for the Armed Forces, Penny Mordaunt, that the UK does not have a veto on the entry of new members into the EU and Cameron who says that it does.

Cameron certainly has precedent on his side. French President Charles de Gaulle twice vetoed the UK’s membership of the European Economic Community, the forerunner of the EU, in 1963 and 1967. Moreover, both France and Austria have said that if the long-drawn out negotiations with Turkey do eventually lead to European Commission approval of Turkish membership, then they will call referenda on the issue, effectively giving the French and Austrian people a veto over Turkish membership.

But are the negotiations on Turkey’s EU membership actually going anywhere? In practice, they remain stalled, largely because of the Cyprus issue—Turkey does not recognize the legitimacy of the Republic of Cyprus, an EU member state—but also because Turkey itself appears far less interested in seeing a successful conclusion to the negotiations than when they began in 2004.

Then there is the question of whether Turkey actually conforms to the key principles for EU membership, as set out by the European Council summits in Copenhagen in 1993 and in Madrid in 1995. Under the Copenhagen criteria, countries applying for EU membership have to possess, as the EU summarizes it, “stability of institutions guaranteeing democracy, the rule of law, human rights and respect for and protection of minorities.” In 2004, when the Council opened negotiations on possible Turkish entry, European leaders clearly believed that Turkey met this criterion. In 2016, however, it is a far more complex question.

First, there is the issue of stability of institutions. Turkey is ruled, de facto but not de jure, by a president whose formal role is supposed to be nonpartisan. This is certainly not true of the presidency of Recep Tayyip Erdoğan, as he himself has freely admitted.

Then there is the question of guaranteeing democracy. On May 20, the Turkish parliament voted to lift the immunity of 139 members of parliament so that they could face possible charges relating to terrorism or—perhaps more correctly—what the government considers support for terrorist groups. The legislation, which required a two-thirds majority since it involved amending the constitution, is generally seen as targeting parliamentarians belonging to the Peoples’ Democratic Party (HDP), the predominantly Kurdish grouping, which has called for peace talks with the PKK, the Kurdistan Workers’ Party. Both Turkey and the United States consider the PKK to be a terrorist organization.

The vote in parliament prompted immediate consternation in the European Parliament, with its rapporteur for Turkish affairs, Kati Piri, tweeting: “Dark days in Turkey. Silencing elected MPs of the opposition HDP is a major leap away from democratic standards.”

On human rights, Turkey faces increasing scrutiny over its approach to journalists who criticize Erdoğan.

As the Economist reported on May 10: “These are dark days for journalism in Turkey. The latest press freedom index by Reporters Without Borders puts the country in 151st place, between Tajikistan and the Democratic Republic of Congo. Censorship is the industry standard. News reports from the Kurdish southeast, where clashes between armed separatists and Turkish security forces have claimed more than a thousand lives since last summer, increasingly resemble army propaganda.”

Then there is respect for minorities. The war against the PKK is one thing, but in this war Turkish forces have struck Kurdish civilian targets as well, prompting HDP leader Selahattin Demirtaş to claim in an interview with Der Spiegel in April that “almost 400,000 people have had to leave their homes” and that “the southeast of Turkey resembles Syria.”

As Europe struggles with the influx of hundreds of thousands of migrants from conflict zones, including Syria, the EU has, as part of a controversial migrant deal, promised Turkey visa-free access to the Schengen area. This would allow Turks to travel freely between almost all EU countries. But the UK is not part of the Schengen, so Turks will still need visas to enter the country. More to the point, the EU’s promise of visa-free access to most of Europe is conditional on Turkey changing its rules on terrorism. Turkey has refused to do so. Yalçın Topçu, a senior adviser to Erdogan, said on May 22 that the EU “could not damage our fight against terrorism on this visa pretext; this is not moral or faithful to the deal.”

All of this makes it highly unlikely that Turkey will enter the EU any time soon. Cameron, speaking on UK television on May 22, joked that at the present rate of progress it might take until the year 3000 for Turkey to secure EU membership, before adding that it would be “decades, literally decades” before there was even a prospect of Turkey joining the EU.

While Cameron would appear to be the winner in terms of rational argument regarding Turkish entry into the EU, the emotional impact of the introduction of Turkey into the Brexit debate may turn out to be a more important factor. Increasingly, the pro-Brexit—or Leave—campaign has focused on voters’ fears of fresh waves of immigrants and on the need, as they put it, for the UK to control its own borders.

That’s what seems to have prompted the Leave campaign’s most prominent cabinet member, Justice Secretary Michael Gove, to assert that 5.2 million immigrants, including from Turkey, would head for the UK if the UK voted to stay in the EU, and why Mordaunt said that the UK has no veto to keep Turkey out.

In the background, there remains the question of whether a scurrilous limerick written by the most prominent Brexit campaigner of all, former London Mayor Boris Johnson, asserting that Erdoğan might enjoy some peculiar sexual practices, might yet result in serious diplomatic repercussions.

Johnson, who stands a strong chance of becoming the UK’s next prime minister if Brexit prevails, should know better than most not to offend Turkish sensibilities. His Turkish great-grandfather— like Johnson a combination of journalist and politician—was Ali Kemal, who was briefly interior minister in 1919 during the death throes of the Ottoman empire. Kemal died at the hands of a rampaging anti-Ottoman mob three years later.