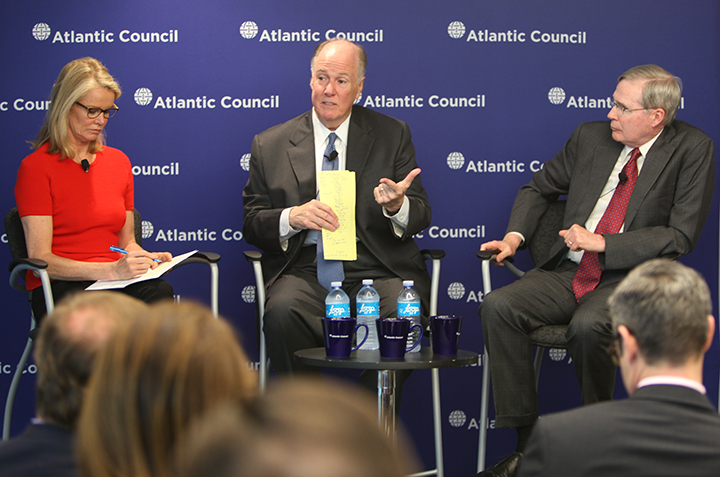 “Once Britain decides to leave, the momentum for dismembering the EU is going to be very strong,” said Stephen J. Hadley, an executive vice chair of the Atlantic Council’s board who served as national security advisor in the George W. Bush administration.

The UK will hold a referendum on June 23 to decide whether to remain in the EU. Recent polls show the British electorate is sharply divided on the question. Hadley said a British exit—a Brexit—would weaken the UK, the EU, and “may actually precipitate an unravelling of the EU, and that, I think, is bad for the United States, bad for Europe.”

“If UK leaves…it weakens the United States because we lose our traditional partner at a time when the number of global challenges we face could not be greater,” he added.

Hadley and Thomas E. Donilon, who served as national security advisor in the Obama administration, spoke at the Atlantic Council on a panel moderated by Katty Kay, lead anchor at BBC World News America.

Hadley said the only way to address the multiple global challenges, particularly the migrant crisis and the threats posed by a revanchist Russia, is to bring together “our diplomatic, economic, and military weight in a focused way.” These threats will be “much magnified if the United States and a unified Europe are not working together to solve those problems,” he added.

Donilon said: “This could not be a worse time to do this to Europe. It is highly ill advised from a UK perspective, Europe’s perspective, and certainly the United States’ perspective.”

Hadley and Donilon are among thirteen signatories of a letter—signed by former US secretaries of state, secretaries of defense, and national security advisors—that says the “UK’s place and influence in the world would be diminished and Europe would be dangerously weakened” if it were to leave the EU.

In a video message accompanying the letter released by the Atlantic Council, former US Secretary of State Madeleine K. Albright said: “The key message is how important it is to the world and to the United States that the United Kingdom remain in the European Union…it is the basis of how we need to operate in the twenty-first century. The EU has been a force for good. It is a stabilizing factor in itself.”

Kay described the UK’s relationship with Europe as complicated. “A lot of it is about heart not head,” she said.

British Prime Minister David Cameron is leading the campaign to have the UK remain in the EU; former London Mayor Boris Johnson is a vocal proponent of leaving.

If the UK were to leave it would lead to an unprecedented period of uncertainty. Article 50 of the Lisbon Treaty gives any member state that has decided in a referendum to leave the EU two years to negotiate the terms of its departure with the other twenty-seven members of the bloc. The impact on the UK’s relationships with its partners in and out of Europe during this period is unclear.

A Brexit could also lead to a domino effect with other EU member states holding similar referendums. Czech Prime Minister Bohuslav Sobotka has predicted a discussion along the lines of Brexit in the Czech Republic, and Serbian Prime Minister Aleksandar Vucic has said the EU has “lost its magic power.”

European negotiators will send a strong message to deter other countries that are thinking about such referendums to show that getting out of Europe is neither easy nor beneficial, said Hadley, noting that Russia would exploit the opportunity created by a weakened Europe.

“In a world that is already extremely uncertain for the UK and Europe, [a Brexit] would put uncertainty on steroids,” he added.

Besides opposing a Brexit, British and European leaders need to respond to the public discontent with and criticism of European institutions, said Hadley. “We are not saying defeat Brexit and everybody goes to sleep,” he said. “The European project needs to be fixed, it needs to be supported by the people, but the way to get there is not to dismantle it first. The way to get there is to fix it and then bring it to the people.”

“The folks arguing for a Brexit are right. The EU has, sadly, been an elite project… And that is a weakness,” said Hadley. “The chickens, in some sense, are coming home to roost.”

“The agents of Project Fear—and they seem to be everywhere—have warned us that leaving the EU would jeopardize police, judicial and intelligence cooperation. We have even been told that the EU has been responsible, over the last 70 years, for ‘keeping the peace in Europe.’ In every case the message is that Brexit is simply too scary; and the reality is that these threats are so wildly exaggerated as to be nonsense,” Johnson wrote in the Telegraph in February.

Hadley insisted that the warnings raised by those who want the UK to remain in the EU are not scare tactics. “It is not fear mongering,” he said, “it is a recognition of the reality that would follow.”

The United States and the United Kingdom share a “special relationship,” which could be considerably diminished if the UK were to give up its seat at the EU table.

“We have a strong interest in a strong UK,” said Donilon, while making the point that the United States is also interested in a strong EU and doesn’t want an “inward-looking and insular” UK.

In a sign of US unease about the outcome of the referendum, US President Barack Obama uncharacteristically waded into the Brexit debate on a trip to London in April. The president urged Britons to “stick together” with the EU and wrote in the Daily Telegraph: “As citizens of the United Kingdom take stock of their relationship with the EU, you should be proud that the EU has helped spread British values and practices—democracy, the rule of law, open markets—across the continent and to its periphery.”

Leaving the EU will not enhance the UK’s intelligence relationship with the United States, said Donilon. “You can’t hide yourself off from the world and expect to be safe,” he said, adding that the terrorist attacks in Paris last November and in Brussels in March should have served as a wakeup call for Europe to enhance intelligence cooperation.

Atlantic Council Executive Vice President for Programs and Strategy, Damon Wilson, asked the panelists what the United States could do to push back against the “forces of fragmentation” in Europe.

Hadley suggested that the United States could more aggressively address some of the challenges facing Europe, including by strengthening NATO’s presence in the Baltic States, Central and Eastern Europe, and in the Balkans to deter Russia from taking action similar to its annexation of Crimea from Ukraine in 2014. The United States should also enhance counterterrorism cooperation with Europe, and try and find a solution to the war in Syria with the goal of stemming the flow of migrants to Europe, he added.

Donilon said the Obama administration must work to conclude a transatlantic trade deal—the Transatlantic Trade and Investment Partnership (TTIP)—by the end of the year. Like Hadley, Donilon also called for greater counterterrorism cooperation between the United States and Europe. “The failings in Europe today, with respect to intelligence sharing, information sharing, border controls, databases, is a clear and present danger to the United States as it is to Europe,” he said.