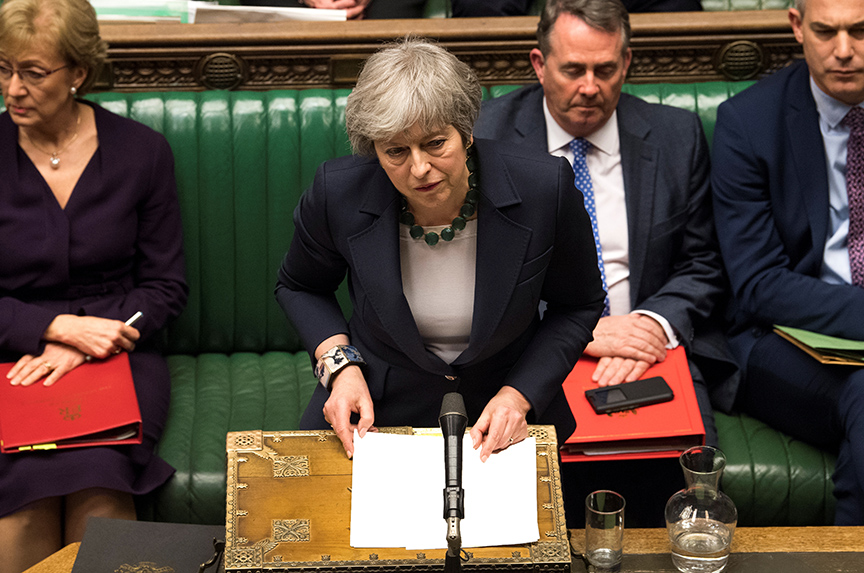 Britain’s government is falling apart. The problem is that there is no sign that the country is coming together.

March 13 turned into another tumultuous day in Britain’s Brexit saga: members of Parliament voted to take a “no-deal” departure off the agenda—but were immediately told that Britain might still crash out of the European Union without a deal; they heard the chancellor of the exchequer call for a cross-party consensus to get a Brexit deal across the line—and offer a £26 billion incentive (some called it a bribe) to secure that goal—and they watched the prime minister and the leader of the opposition engage in the most fruitless exchange in years.

All eyes were on the House of Commons as it voted in the evening to rule out a “no-deal” exit. First the House of Commons voted narrowly—312 to 308—on an amendment that said Britain should not leave the EU without a deal at any time, a considerable change from the original government motion which simply sought to rule out a “no-deal” Brexit on March 29, the currently scheduled date for Britain to quit the EU. Then it voted by a much bigger margin—321 to 278—for the amended motion, making it clear that most MPs really do oppose any suggestion that Britain should terminate its 46-year membership of the world’s biggest trading block without an agreement.

But Prime Minister Theresa May, still smarting from the massive 391-to-242 vote on March 12 against her own planned deal, warned that this was far from being the end of the story. She acknowledged there was a “clear majority” opposed to a “no-deal” Brexit, but stressed that what she called the “legal default” was that Britain would still leave the EU on March 29 if Parliament failed to approve a deal by then. This is perhaps the clearest indication that she has not given up the fight for the agreement that she negotiated with the European Commission in November and that she will bring it back to the House of Commons for yet another vote, possibly this week.

However, her own position was undermined by the fact that some government ministers abstained or absented themselves in the final vote, previously grounds for sacking. But with May’s authority shredded by this long series of major parliamentary defeats on the most important policy of her government, it is resignations, not sackings, that are now expected.

Nor have the arch Brexiteers surrendered. Their leader, Conservative MP Jacob Rees-Mogg, said that the motion passed by Parliament was only advisory and, like May, stressed that the legal position remained unchanged: if there was no agreement by March 29, the default position was that Britain would leave the EU without a deal.

In fact the idea that March 29 is Britain’s date with destiny no longer seems quite so certain. On March 14 the House is due to vote in a motion requesting the other twenty-seven member states of the EU to approve an extension to the March 29 deadline, a process known as delaying Article 50. There is an assumption that the twenty-seven states will each give their approval to the Article 50 extension, but this cannot be guaranteed and how long the extension would be is also unclear.

Perhaps the day’s most important contribution to any potential solution to the Brexit impasse was that of Chancellor of the Exchequer Philip Hammond.  Amidst reports of major Cabinet divisions, with ministers who backed the Remain campaign in the 2016 Brexit referendum urging the prime minister to cut a deal with the Opposition Labour Party, Hammond used the occasion of his annual financial statement to call for consensus, and to warn of economic disaster if Britain left the EU without an agreed deal.

Referring to the Article 50 extension vote, Hammond declared: “Tomorrow, we will have the opportunity to start to map out a way forward… towards building a consensus across this House.” He spoke of working for “a deal we can—collectively—support, to exit the EU in an orderly way,” and of seeking to develop “a future relationship [with the EU] that will allow Britain to flourish… protecting jobs and businesses.” He also spoke of a “deal dividend—an economic boost from recovery in business confidence and investment.” And his own contribution to this dividend? A whopping £26 billion in tax cuts and departmental spending increases in his next autumn budget—so long as MPs backed a Brexit deal.

On the other hand, Hammond added: “Leaving with ‘no deal’ would mean significant disruption in the short and medium term… and a smaller, less prosperous economy in the long term, than if we leave with a deal. Higher unemployment; lower wages; higher prices in the shops. That is not what the British people voted for in June 2016.”

Calling for cross-party consensus? That runs directly counter to the policy pursued by the prime minister to date, which was solely focused on securing the support of her own Conservative Party, of Northern Ireland’s Democratic Unionist Party, and of a handful of Labour MPs in constituencies that voted heavily to leave the EU in the 2016 referendum. May’s 149-vote defeat in the March 12 vote in the House of Commons on the deal she negotiated with the European Commission last November illustrated the failure of that particular strategy.

Hammond did not outline a solution, but he may just have done enough to open up a path to a solution that could eventually secure an orderly Brexit. That’s because he is known to favor Britain staying in a customs union with the EU, and that happens to be a key part of Labour’s policy. It is now highly likely that at some stage, possibly as early as next week, the House of Commons will hold a series of further votes—dubbed “indicative votes”—to see whether there might be a cross-party majority for various potential outcomes, notably a customs union, membership of a single market or a second Brexit referendum.

But an awful lot of political antagonism and personal animosity would have to be overcome. Labour’s finance spokesman, John McDonnell, slammed Hammond in his response to the chancellor’s statement. “Brexit looms large on everything we discuss. Even today the chancellor is trying to use the bribe of a double deal dividend or threat of postponing the spending review to cajole MPs into voting for the government’s deal. What we’re seeing is not a double dividend. We’re seeing Brexit bankruptcies as a result of the delay in negotiations.”

And one of Britain’s most acerbic commentators, the Sun’s political editor, Tom Newton Dunn, tweeted simply that the chancellor’s £26 billion offer constituted “the biggest political bribe of all time.”

The Hammond-McDonnell exchange followed a surprisingly muted Prime Minister’s Questions. And while that was partly because May was quite literally losing her voice—indeed she had to stand down in the key debate preceding the “no-deal” vote—it was also because Labour Leader Jeremy Corbyn also had nothing new to say.

Corbyn did make some telling points, notably that Britain’s leading business group, the Confederation of British Industry, had a few hours earlier described a no-deal Brexit as “a sledgehammer to the economy” and that it was time for May to change her policies, or, as he put it, to move on from her red lines. May’s response was noted not for its substance, that Corbyn’s proposals for a solution had been previously rejected by Parliament, but for her emotional finale: “I may not have my own voice but I do understand the voice of the country. They want to leave the EU, they want to end free movement, they want to make sure laws are made in our country and judged by our courts.”

A more substantive exchange was that with the Scottish National Party’s parliamentary leader, Ian Blackford, who called on May to insist her MPs vote to take no deal off the table. The prime minister responded by saying the only way to achieve this was to revoke the mechanism that the House of Commons had used two years ago to start the Brexit process and set the March 29 departure date, the famous—or notorious—Article 50 of the Treaty of the European Union (2007), which has to be invoked if a member state wants to leave the EU.