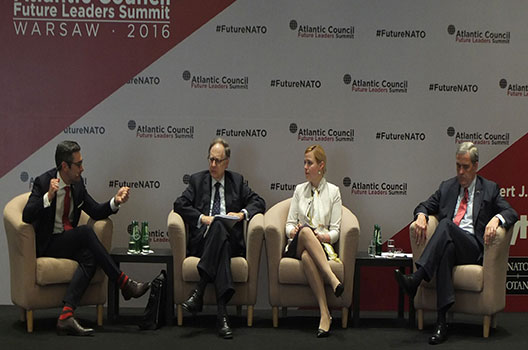 The British vote to leave the European Union will have minimal impact on the United Kingdom’s role in NATO; it could, in fact, enhance the Alliance’s importance as a forum at which to address global challenges, NATO Deputy Secretary General Alexander Vershbow said in Warsaw on July 7.

“The British are going out of their way to stress that Britain’s status within NATO is unaffected by Brexit,” said Vershbow, “that is a fact.”

Describing the United Kingdom as a mainstay of the twenty-eight-member Alliance, Vershbow said that “if anything, for the UK, NATO clearly becomes more important if they go through with Brexit.”

“NATO itself, as a forum, may become more important because this will be the place where we can address these fundamental challenges that we have to deal with over the coming years,” he added.

Vershbow spoke at the Atlantic Council’s NATO Future Leaders Summit in Warsaw. He was joined in a panel discussion by Douglas Lute, the US permanent representative to NATO, and Alexandra de Hoop Scheffer, a senior transatlantic fellow at the German Marshall Fund. Damon Wilson, executive vice president for programs and strategy at the Atlantic Council, moderated the discussion. The conference was held a day before NATO leaders were to meet for their two-day summit in the Polish capital.

In a June 23 referendum, British voters backed a UK departure from the European Union, a so-called Brexit, by 52 percent to 49 percent. The results of the vote are nonbinding. Brexit negotiations with Brussels will only officially start once the British prime minister informs the European Council of the decision to leave the EU—thereby invoking Article 50 of the Lisbon Treaty. British Prime Minister David Cameron, who has announced his decision to step down in October, has said he will leave that invocation to his successor.

Vershbow acknowledged that if Brexit negotiations turn “divisive” and “rancorous” it would have some spillover onto deliberations in NATO. “[NATO] Secretary General [Jens Stoltenberg] is certainly trying to underscore that if anything, NATO is now important than ever and that our unity and solidarity will have to sustain us through what will clearly be a difficult period for Europe,” he said.

The UK and NATO

The UK is a significant contributor to NATO. It is one of five NATO member states that meets the goal of contributing two percent of its GDP to defense.

“Clearly, inside the halls of NATO, the UK is a leader, it leads with its capabilities and we don’t expect that to change,” he added.

De Hoop Scheffer noted that while the vote for Brexit sends a troubling political message to other EU members states, it would have the minimal impact on the “defense domain” as bilateral defense cooperation—such as the Lancaster House Agreement between the UK and France—will continue.

In fact, the EU Global Strategy document rolled out in June advocates that Europe needs to develop its own military autonomy. “When it comes to collective defense, NATO remains the primary framework for most member states” but “as Europeans we must take greater responsibility for our security,” according to the document from EU foreign policy chief Federica Mogherini.

Lute said it was good news if EU member states wish to contribute to their own defense, but, he added the caveat, “autonomy opens the door…for duplication and inefficiency.”

“There is simply not enough defense investment for duplicate structures,” said Lute. “If we can work this in a way that we compliment and reinforce one another then the US will be the strongest advocate of this, but we are going to be very sharply watching anything that looks like duplication.”

He cited NATO’s command structure as an example. “We don’t believe that Europe needs a separate command structure just like that into which we pour several thousand people, untold euros, only to duplicate the structure that has been so well tried and true in NATO,” he said.

“At the end of the day, we can’t simply hunker down and burrow into our own self-defense. Security for NATO starts with stability beyond NATO and that’s why projecting stability is so important,” he added.

NATO leaders will meet in Warsaw on July 8 and 9. The summit takes place at a time when Europe is facing challenges from a migrant crisis on its south, a revanchist Russia to its east, and the Islamic State of Iraq and al-Sham (ISIS) or Daesh that has claimed responsibility for terrorist attacks in Paris, Brussels, and Istanbul.

Russia “tore up the international rulebook” and “challenged our vision of a Europe whole, free, and at peace” when it annexed Crimea in March of 2014, said Vershbow.

“NATO has shown that it is very adaptable…we need some serious adaptation again,” he added. “Warsaw gives us the opportunity to think about the long term. We now sadly recognize that we are in a long-term strategic competition with Russia.”

The Warsaw Summit is expected to send a message of deterrence and defense.

At NATO’s Wales Summit in 2014, Alliance member states agreed to enhance the capabilities of the NATO Response Force (NRF) in order to respond to challenges from Russia and the Middle East and North Africa.  This force—the Very High Readiness Joint Task Force (VJTF)— met its intended air, sea, and land deployment goals during NATO’s Exercise “Brilliant Jump” in which 2,500 allied troops deployed from across Europe into Poland in May.

“For NATO, it is a back to basics” when it comes to deterrence, said Lute, “but it is not a return to the Cold War.”

The VJTF’s rapid reaction capability will be complimented with a forward presence. “This forward presence literally will begin in the north in Estonia and it will end up in the south in Bulgaria,” said Lute.

An Atlantic Council report, “Restoring the Power and Purpose of the NATO Alliance,” urges NATO to permanently station troops in the Baltic States, Poland, and the Black Sea region. R. Nicholas Burns, an Atlantic Council board member who served as under secretary of state in the George W. Bush administration, and retired Gen. James L. Jones, Jr., chairman of the Atlantic Council’s Brent Scowcroft Center on International Security and a former national security advisor in the Obama administration, are the authors of the report.

NATO plans to deploy four combat battalions in Poland and the three Baltic States: Estonia, Latvia, and Lithuania. The United States will lead the NATO battalion in Poland.

In May, US military officials inaugurated a missile interceptor site in Romania, which will be part of a larger missile defense shield. Romania will also host a multinational NATO brigade.

In June, NATO conducted a series of major military exercises—known collectively as Anakonda-2016—in Poland and a separate exercise—BALTOPS—in the Baltic Sea.

For the first time in NATO’s history there will be a “substantial combat-ready capability forward across the eastern flank of the Alliance,” said Lute.

Not all NATO member states view the challenges facing Europe in the same order of priority. France, for instance, is more concerned about terrorism in the wake of the attacks in Paris in November of 2015 than the threat posed by Russia, said De Hoop Scheffer.

“You cannot expect France to share the same sense of urgency when it comes to Russia [as] Poland or the Baltic States,” she said. “And you cannot ask the Baltic States or Poland to be as involved as we are in the south to face the crisis of Daesh, but that does not mean that we do not share a sense of unity of purpose.”

The leaders of Ukraine and Afghanistan will be among those present at NATO’s Warsaw Summit. US President Barack Obama announced on July 6 that he will leave 8,400 US troops in Afghanistan when he leaves office next year. That number is up from the 5,500 he had originally pledged to leave in the country.

At Warsaw, NATO leaders will look for ways in which the Alliance can supplement, not supplant, the US-led coalition’s effort against ISIS and the EU’s attempts to contain the migrant crisis that has been fueled by conflict across the Middle East and North Africa, particularly in Syria, Iraq, and Afghanistan.

“The key is to complement, not compete,” said Lute.