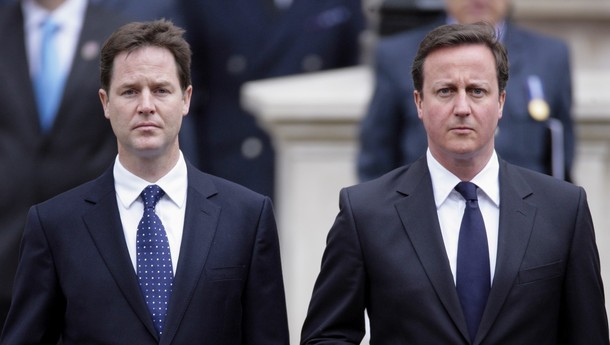 As I write this I am sitting in the Senate Chamber of Church House at the Chief of the Royal Air Force’s air power conference organised by the Royal United Services Institute. Church House is the Supreme Spiritual Headquarters of the Church of England and there can be no better place to discuss the future of the Royal Air Force than the seat of the Lord High Air Power Almighty in London.

The good news is that British Defence Minister Philip Hammond has just given the strongest hint yet at this conference that HMS Prince of Wales, one of two super aircraft-carriers the British are building will be commissioned into the Royal Navy towards the end of the decade. Rule Britannia!

And then there is Europe. The latest foment over the road in the House of Commons has been triggered by the ‘we don’t do political principle’ Labour opposition who joined with Tory rebels Wednesday to inflict a humiliating defeat on PR-Meister Cameron as he prepares to head off to not-negotiate the European Omission’s five year Multi-Annual Financial Framework or EU budget. The sceptics want the PR-Meister to negotiate a real-time reduction in the Omission’s budget. Fat chance!

Last night at Chatham House Lib-Dem leader and David Cameron’s Coalition partner-in-crime Nick Clegg said that there was not the slightest hope in hell (or is that Brussels) of Britain securing an aforesaid reduction not least because a strong majority of EU member-states now have access to British money with Labour having in effect negotiated away any say over the matter. Rather Nick wants Britain to confront changes in the EU “head on”, which in Nick-speak means join the Euro. He is after all the Omission’s point-man in London.

Now, I like Nick Clegg. He is a fellow Sheffielder and given that we are an endangered species we really should stick together. And, technically he is right but that is not the point. What Nick fails to point out is that the changes taking place in the EU will inevitably lead to the runtification of the European nation-state and thus represent a clear and present danger to the British state. Do you really think Scotland would be considering independence if not for the political backdrop of the EU?

Rather, Nick’s false ‘reality check’ reflects the lack of any sensible debate in this town about what next in Europe. The choice Nick offers is either complete political immersion in Project Europe or a form of political Dunkirk, a false choice wrapped in a European flag. In fact what is needed is a sensible chat about Britain and a very changed Europe. There are huge questions of political philosophy implicit in the changes taking place in the EU, particularly as it affects the relationship between the state and the individual. It may well be that in time the UK leaves the EU, although we are not there yet. Therefore, London desperately needs grown-up people to talk in a grown-up way about one of the most important choices Britain will soon have to make.

This RUSI conference could point the way forward. What has struck me about the British defence leadership is that they are slowly muddling towards something like a real defence strategy, although given the lack money and personnel committed it still too often smacks of hollow strategy. That said the emphasis on strategic partnerships with allies and partners both within institutions such as the EU and NATO and beyond is to be welcomed. Britain foresees a series of powerful partnerships with emerging states and traditional allies befitting the world’s 5th or 6th real economy and 3rd or 4th defence actor.

Whatever happens to Britain’s EU membership it is vital that the strategic state-to-state relationship with France is preserved and new relationships built with Germany and Italy. However, that will require Europe’s power states to look at their respective relationships with London in a new light. Equally, Britain must be freed to exploit deeper its strategic relationship with the United States and others, just like Germany is doing with China in pursuit of the German interest. These relationships will be built on traditional forms of statecraft for which and to which Britain’s powerful defence strategic brand will be critical.

This will be the decade of choices for Britain and Nick’s implicit status quo at any cost is not an option. It is not those who question Britain’s continued EU membership who are in cloud cuckoo land, even if sometimes they sound like a stuck record.

Rather it is you Nick who is stuck in cloud Cleggo land with your misplaced “resistance is futile” nonsense. At the very least give the rest of us a vision of how Britain could in future stay in the EU and outside the Euro. We have yet to hear it.