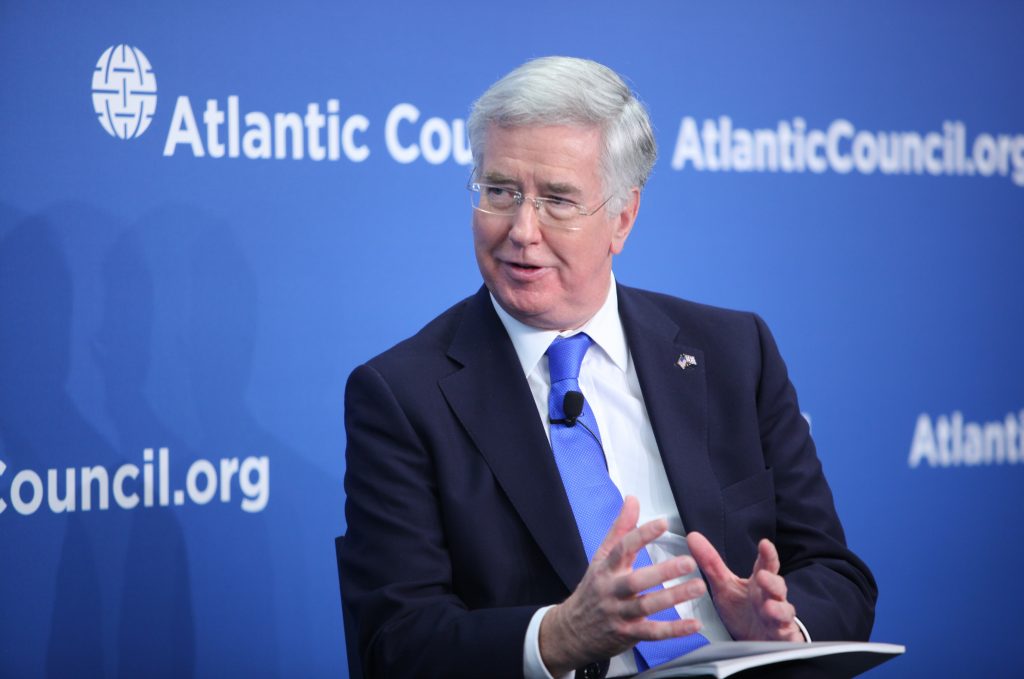 The Nov. 13 terrorist attacks in Paris “brought this terrorism to within two hours of London,” said British Defense Secretary Michael Fallon, “so clearly it had a galvanizing effect.” Britain’s Parliament voted in favor of British airstrikes on the Islamic State of Iraq and al-Sham (ISISI) in Syria on Dec. 2. (Atlantic Council/Victoria Langton) 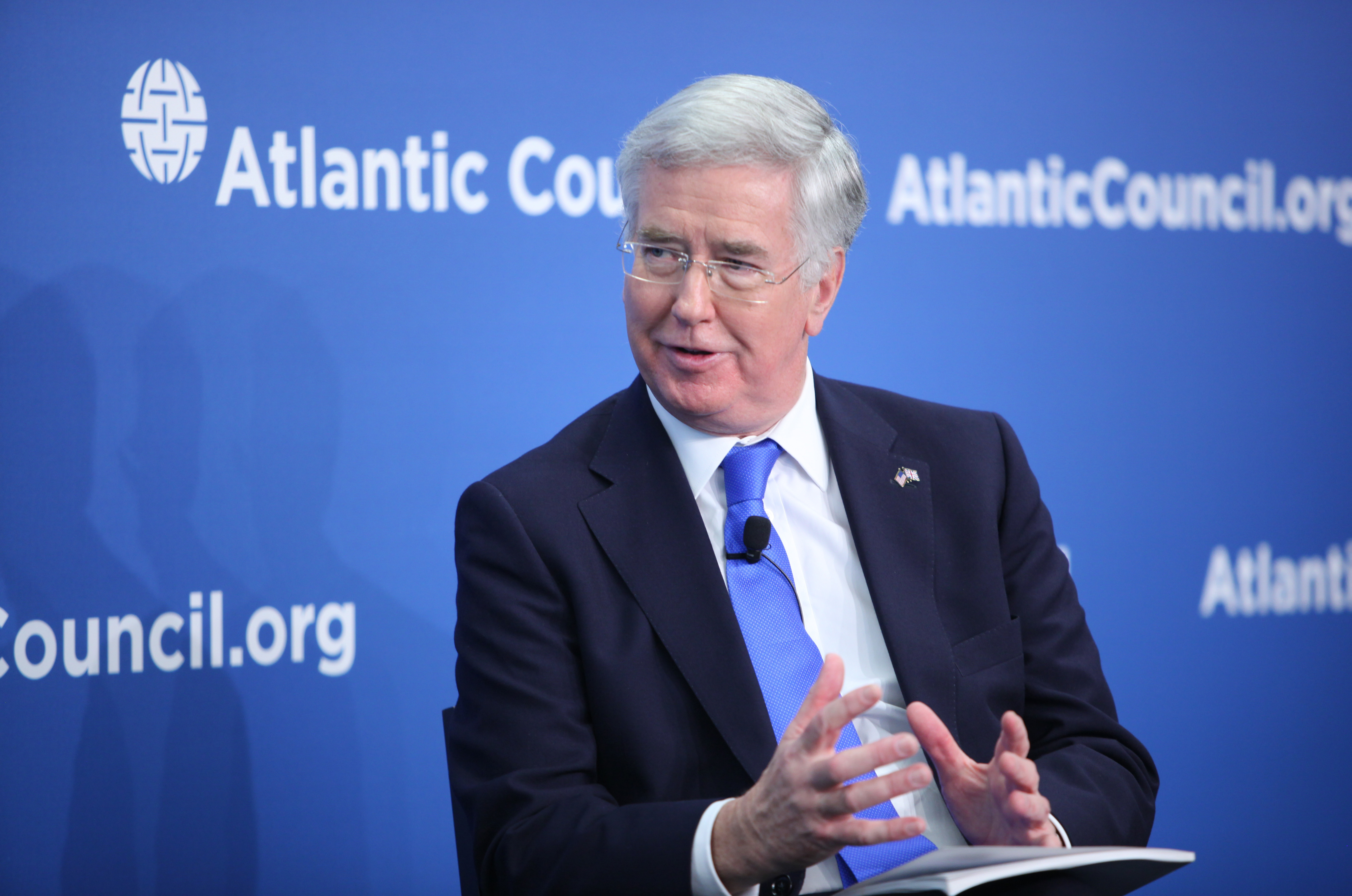 The US-led coalition that is conducting airstrikes on the Islamic State in Syria should more deliberately target the terrorist group’s infrastructure and “tighten the noose” around its de facto capital Raqqa, British Defense Secretary Michael Fallon said at the Atlantic Council on Dec. 11.

“I hope now we are going to see new focus on the more deliberate targeting of the infrastructure that supports ISIS — the oil, the supply routes, the ammunition  depots, the logistics, the command and control centers — that will enable us to degrade ISIL, stop it resupplying its fighters in Iraq, and slowly tighten the noose around Raqqa where all this stuff is organized and directed and inspired,” Fallon said referring to the Islamic State of Iraq and al-Sham’s (ISIS) de facto capital in Syria.

Precision airstrikes could “choke off” Raqqa and ensure that the “grip that ISIL has can’t be reinforced,” the British official said.

The United Kingdom joined the air campaign in Syria early in December after its parliament voted in favor of military action.

An international coalition of more than sixty countries has been targeting ISIS with the objective of degrading and ultimately destroying the group that has emerged as the pre-eminent terrorist threat in its quest to build an Islamic caliphate. ISIS is also referred to as ISIL and Daesh.

The coalition’s air campaign has been mainly focused on providing air support to Kurdish fighters in the northeast of Syria, said Fallon.

While he defended the Obama administration’s Syria strategy — the United States leads the international coalition and is providing the bulk of the air effort in Iraq and Syria, he pointed out — Fallon admitted that there are limits to what airstrikes alone can achieve.

Parliament in a 2014 vote approved British forces conducting airstrikes on ISIS in Iraq, though this authority did not extend to Syria. British jets have also carried out surveillance and reconnaissance missions.

“We have been there since the beginning, but we have been very conscious since last summer that the license parliament gave us to operate in Iraq was somewhat artificial,” said Fallon. “This was a line in the sand between Iraq and Syria that ISIS itself does not respect and it was somewhat illogical to require our own aircraft to turn back at the border and not pursue across it.”

In 2013, parliament had voted against authorizing military action in Syria.

“We have had hanging over us the vote against action in Syria that was taken in 2013,” said Fallon.

In May, British Prime Minister David Cameron’s Conservative Party won a decisive majority in parliament. Six months later, Paris was attacked on the night of Nov. 13.

The attacks in Paris “brought this terrorism to within two hours of London,” said Fallon, “so clearly it had a galvanizing effect.”

Another factor was pressure from the coalition on Britain to recognize the “illogicality” of not being able to strike across “this completely artificial line in the sand,” said Fallon.

“In Britain, we are stepping up alongside our American, French, and coalition allies, bringing the full force of the Royal Air Force to bear, helping to destroy ISIS/Daesh infrastructure, cut off its oil supplies, and locking on to its leadership,” he added.

Fallon’s address to the Atlantic Council was followed by a conversation moderated by The Washington Post’s Karen DeYoung.

On a list of growing threats — nuclear, conventional, state-based, and cyber — Fallon listed “Islamist fascism” as the “new evil.” Its followers have conducted several high-profile attacks this year including in San Bernardino, California; Paris; and at a tourist resort in Tunisia.

“To defeat this evil we require a unity of purpose and a total cross-government response,” said Fallon, adding that part of such a response must involve the use of force.

“There can be no compromise [or] deal with Islamo-fascists,” he said. “Those who murder innocents at a Christmas party, who behead aid workers, who throw gay people off buildings have to be stopped.”

“The United States and the United Kingdom have always stood side by side against terror: against Hitler, against al-Qaeda, and now as part of the anti-ISIS/Daesh coalition,” he added.

But the response to ISIS will need to go much beyond just shutting down its online presence, choking off its financial support, stopping its fighters from crossing borders, and building up the capacity of fragile states.

“It means also calling out the extremist narrative,” said Fallon. “Those susceptible to radicalization must understand that the way of ISIS/Daesh is a metaphorical and literal dead end.”

The British Defense Secretary said it would be incorrect to conclude that this radicalization has nothing to do with a perverted interpretation of Islam. “All of these extremists are self-identified as Muslims,” he said, noting that US President Barack Obama had also noted that Muslims need to confront this problem.

At the same time, the Islamist radicals must not be handed a propaganda coup, Fallon said, noting that ISIS apologists “paint their war as some kind of clash between Islam and the West … but the facts are different.”

Most of ISIS’ victims are Muslims and the anti-ISIS coalition is composed of many Muslim countries, he noted. “Our challenge is to support the reforming voices within the Muslim community, preventing the fusion of religion and politics, and stopping the slide into extremism.”

ISIS not the only danger

The West faces other threats besides ISIS: a resurgence of state-based threats, a revanchist Russia, and cyberattacks, said Fallon.

Fallon touted the United Kingdom as a powerful partner for the United States with capabilities and power projection that few, if any, of Washington’s other allies can provide.

Britain will be an even greater partner as it ratchets up defense spending — it already spends 2 percent of its GDP on defense and will spend more than $265 billion on purchasing new equipment.

As Britain becomes a stronger partner of the United States’ Fallon said he wants to see the relationship become more of a two-way street. “We are investing more in you, and we are going to expect more from you as well,” he said. “I want to see more contracts in the supply chain.”

Britain will also do more to project its influence around the world and strengthen the international rules-based order. It has been urging its European partners to “up their game” to address the threats Europe faces — including from Russia, said Fallon.

Russia’s annexation of Crimea in 2014, its support for separatists in eastern Ukraine, pressure on the Baltic States, increased defense expenditure on nuclear and conventional forces, growing airspace violations, and increased submarine activity all mean that Russia has to be treated as a threat, said Fallon.

Britain, meanwhile, also intends to make more investments in innovation — a necessity spotlighted in its Strategic Defense and Security Review, which outlines the national defense strategy for the next five years.

Referring to collaboration with the United States, Fallon said: “We know that when our two countries work together we are more than the sum of our parts.”