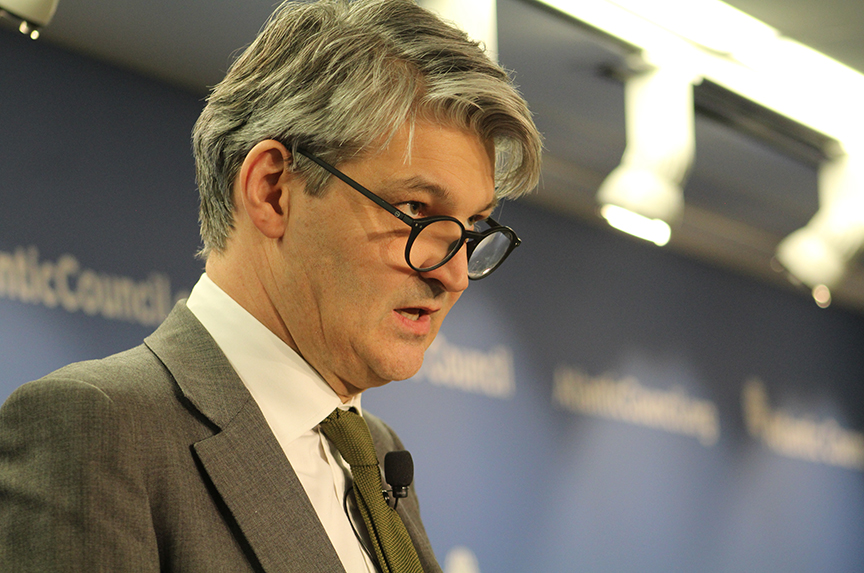 In the aftermath of Russian cyberattacks during the US presidential election last year and amid concerns about a repeat of such a strategy in Europe as Germany, France, and the Netherlands go to the polls this year, British officials are calling for greater cooperation on cybersecurity between NATO and the European Union.

“NATO is the first and most important part of an international response, but it cannot be the whole answer,” Stephen Lovegrove, the British defense ministry’s permanent secretary, said at the Atlantic Council on March 6.

Citing threats from Russia’s “hybrid model” of warfare, Lovegrove called for military and non-military responses, which, he said, includes building on the agreement from NATO’s Warsaw summit in 2016 to reinvigorate the NATO-EU relationship through cooperation on cybersecurity and boosting counter-hybrid capabilities.

NATO needs to be configured quite clearly to meet the threat posed by Russia, said Lovegrove. “This is not an aggressive posture, it needs to be a defensive posture,” he added.

Lovegrove’s call for greater NATO-EU cooperation on cybersecurity was echoed by British Defense Secretary Michael Fallon who, speaking at a meeting of EU defense ministers in Brussels on March 6, said he “urged the EU to cooperate more closely with NATO, to avoid unnecessary duplication and to work together on new threats, including cyber.”

Following his keynote address, Lovegrove participated in a discussion moderated by Franklin C. Miller, a principal in the Scowcroft Group and an Atlantic Council board member. The event was hosted by the Atlantic Council’s Brent Scowcroft Center on International Security.

In his remarks, Lovegrove emphasized the importance of bilateral relationships noting that there is no other closer US ally than the UK. This message was underlined during British Prime Minister Theresa May’s visit to Washington in January.

On that visit, May met US President Donald Trump and congressional leaders to whom she urged engagement with Russia, but warned to “beware” of Russian President Vladimir Putin.

Trump and his administration have come under fire for their soft line on Russia and contacts with Russian officials before assuming office. Mike Flynn was forced to step down from the job of national security adviser in February after it was revealed that he had hinted to Russia’s Ambassador to the United States, Sergey Kislyak, that a future Trump administration would consider easing sanctions imposed by the United States following Russia’s annexation of Crimea.

Lovegrove said that the UK government is committed to keeping the sanctions in place and urged a similar resolve from the Trump administration, which has indicated it might consider lifting those sanctions. “I think most European allies hold firm, too, as well and I hope that the new American administration will stay the same,” he said.

The British official said it is important to keep open the lines of communication with Russia “so that we can understand how their doctrine is evolving.” As part of this effort, British Foreign Secretary Boris Johnson will be traveling to Moscow soon to meet Russian Foreign Minister Sergei Lavrov.

Ties between Russia and the West have become strained over cyberattacks and support for far-right political parties, both actions that have been traced back to Moscow.

The US intelligence community and former US President Barack Obama’s administration accused Russia of conducting cyberattacks with the intention of helping Trump win the presidential election in 2016. Similarly, European officials have cited a Russian threat ahead of elections in Germany, France, and the Netherlands. The goal of this campaign is to “weaken or destabilize” Germany, Hans-Georg Maassen, a top German security official, said in a statement in December of 2016.

Russia has also been accused of hacking Ukraine’s power grid in 2015, and of carrying out a massive cyberattack on Estonia in 2007.

While the United Kingdom voted to leave the EU in a referendum in the summer of 2016, Lovegrove said his country will maintain its security commitments through its role in NATO. “We are leaving the EU, but we remain committed to European security and we will continue to be a supporter of the EU’s efforts to contribute to international peace and security,” he said. “And we will continue to advocate within NATO and with our European partners for a mutually supportive relationship between NATO and the EU, which is in our and all others’ national security interests.”

Trump has in the past described NATO as “obsolete.” Lovegrove, however, emphasized the critical role the Alliance plays in the United States’ security. “NATO is not an organization solely about European security. It is an alliance for Euro-Atlantic security, including the US homeland and the waters in between,” he said. “We have, perhaps, grown too comfortable considering our shared ocean is safe, somewhere we don’t need to worry too much about. That is wrong.”

Trump, like Obama before him, has urged NATO member states to meet the Alliance’s target of spending 2 percent of their GDP on defense. Only five of NATO’s twenty-eight member states meet this goal. Unlike Obama, Trump and his defense secretary, James Mattis, have gone a step further by calling into question the United States’ commitment to the Alliance if the spending target is not met by all its members.

Lovegrove said such rhetoric has probably had quite a lot of resonance on the Continent. “It is a subject of conversation… certainly in places where it hadn’t been a proper conversation and it has become so in the last few months really,” he said. In particular, comments from Mattis—a former NATO Supreme Allied Commander Transformation—has made a difference and “we’re glad that they are having more bite now than they have perhaps they have hithertofore,” he added.

Lovegrove said NATO knows that it must deliver greater resources, especially from those member states who do not meet the 2 percent target. “Efficiency is not a substitute for commitment. We need both,” he said.

Some NATO members, including Canada, make the case for seeing defense expenditure in more than just budgetary terms.

Citing such positions, Lovegrove said: “There will be a moment coming up when we need to think quite carefully about what 2 percent means for each of the members of NATO.”

“We need to, fairly soon, get into a more granular discussion about where those points of difference actually are so that NATO as a whole can operate in a more holistic way with the right level of capabilities and skills,” he added.

NATO has recently deployed troops to the Baltic States and Poland; it has placed greater focus on its higher-readiness forces; and it is starting to develop new responses to hybrid threats, nuclear blackmail, and cyberattacks. “But we now need to press the accelerator,” Lovegrove said.

He urged reform that will create a NATO that is “less bureaucratic, better at prioritizing, more capable of taking difficult decisions quickly.”

In order to retain member states’ financial commitments to the Alliance, he said NATO must demonstrate through action that it contributes to tackling all of its members’ national security challenges, including terrorism.

On the nuclear deal with Iran, which Trump has disparaged, but Western governments and international monitors have said is working, Lovegrove said: “We certainly do look upon the Iran deal as the best hope for bringing Iran into the position of being a responsible, ideally nonnuclear-armed, country.”

He said the UK will be “seeking to convince the [Trump] administration, if they do have any doubts, that this is the right deal to do.”

Noting that the deal has not led Iran to moderate its malign activities in its neighborhood, Lovegrove said the onus is on the Iranian government to make the most of the lifting of sanctions on the Islamic Republic that came about as a result of the nuclear agreement.

Image: “NATO is the first and most important part of an international response, but it cannot be the whole answer,” Stephen Lovegrove, the British defense ministry’s permanent secretary, said at the Atlantic Council on March 6. (Atlantic Council)