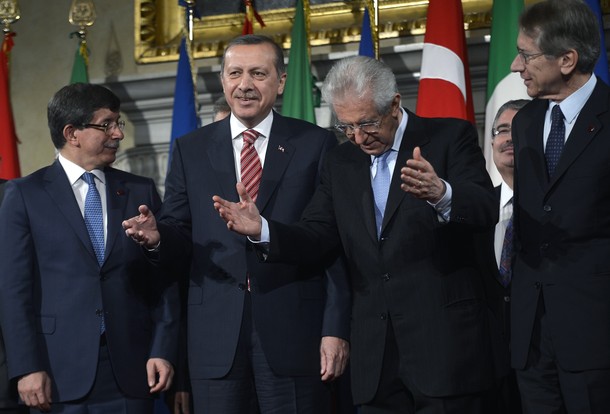 The crisis in Syria and the confrontation with Iran over its nuclear program have highlighted the renewed importance of one of the oldest and most enduring relationships of the United States: its alliance with Turkey.

The US-Turkey partnership was forged during the Korean conflict and the Cold War, and Washington and Ankara stood shoulder-to-shoulder to confront the Soviet challenge. Now, the two countries have an opportunity to work together to help shape the Middle East, ensure the stability of Iraq, contain Iranian ambitions, end the Assad regime in Syria and ensure reliable energy supplies to Europe.

In the past decade, Turkey has become the 17th-largest economy in the world and undertaken far-reaching political reforms. It has gone from being a cautious actor in international affairs to being an influential player in its neighborhood and beyond. In a new Council on Foreign Relations report, a bipartisan panel we chaired makes the case that the two countries should define a new partnership of close coordination in confronting today’s challenges.

There are, however, questions raised about Turkey’s commitment to the West. This is a function of three factors: the rise of the Islamist-oriented Justice and Development Party (AKP); the broadening of Turkey’s foreign policy ambitions under Prime Minister Recep Tayyip Erdogan; and the failure in the West to understand the dramatic changes in Turkey over the last decade.

By most indicators, Turkey today is more representative, modern and economically successful than when the AKP first came to power in late 2002. Although it has pursued a more active foreign policy, Ankara’s outreach to Syria, Libya and Iran began well before the AKP came to power – indeed, before the party even existed.

Turkey’s evolution is not all good news, of course. Washington and Ankara remain divided over the Arab-Israeli conflict. And while Turkey’s position toward Iran is evolving in a direction more consistent with that of the United States, between 2008 and 2010 the Turkish government pursued its interests there without regard for American policy. Turkey’s initial reluctance to host an early-warning anti-missile radar station on its territory aroused concern that it was distancing itself from NATO, but Ankara ultimately decided to honor its security commitment to its traditional allies.

There is also continuing friction over how to characterize the mass killings of Armenians in 1915, the division of Cyprus and Turkey’s relationship with Hamas. The Turkish government has its own views of these issues, and while Washington should help Turkey and Armenia improve their relations, support a resolution to the Cyprus conflict and seek an end to the estrangement between Turkey and Israel, these matters should not preclude the deepening of US-Turkey relations.

On the domestic front, Turkey may be more democratic, but it is not yet a full-fledged democracy. Democratic change is a process that in any country will result in both steps forward and reversals. Turkish leaders have at times manifested a majoritarian view of democracy, without due regard for minority and individual rights, making them appear no more liberal than their predecessors. Turkey’s detention of almost a hundred journalists is inconsistent with a country that aims to deepen its democratic practices.

There is, however, an opportunity for Washington to capitalize on its good relations with Ankara and to encourage Turkish leaders to follow through with their commitments to write a new, democratic constitution, seek a solution to the Kurdish problem, establish a formal and healthy balance in civil-military relations, and safeguard personal and political freedoms.

To make the vision for a new US-Turkey partnership a reality, Ankara and Washington should observe the following principles in their relationship: equality and mutual respect for each other’s interests, confidentiality and trust, close and intensive consultations to identify common goals and strategies on issues of critical importance, avoidance of  foreign policy surprises, and recognition and management of inevitable differences between them.

In the politically dynamic Middle East, Ankara and Washington can collaborate on development projects through the US Agency for International Development and the Turkish International Cooperation Agency. Working together, the United States and Turkey can help generate economic growth in places like Egypt, Tunisia and Libya. To support this effort, Washington should extend financing, guarantees and political risk insurance to Turkish and American businesses that partner in seeking to invest in the Middle East.

Indeed, the US-Turkey economic relationship is underdeveloped and should be upgraded through a new bilateral investment treaty, the intensification of discussions under the 1999 Trade and Investment Framework, and the exploration of a Free Trade Agreement. More broadly, the United States should incorporate some of the principles of its Trans Pacific Partnership into its economic relations with Turkey, especially the emphasis on market access, regulatory compatibility, business facilitation, assistance for small and medium-sized enterprises, and promotion of trade in cutting-edge technologies.

Overall, the story in the past decade is a good one. For the United States, Turkey has always been an important, if at times complicated, ally. Challenges in the bilateral relationship surely remain, but there is an opportunity for Washington and Ankara to forge a genuinely new partnership. To do otherwise would be to miss an historic chance to set ties between the United States and Turkey on a cooperative trajectory in Europe, the Eastern Mediterranean, the Middle East and Africa for a generation.

Former Secretary of State Madeleine K. Albright is an honorary director of the Atlantic Council. Stephen J. Hadley, an Atlantic Council Board director, and principal at the RiceHadley Group, was national security advisor in the George W. Bush administration. They are chairs (and Steven A. Cook is director) of the CFR-Sponsored Independent Task Force on Turkey. This article originally appeared on the Reuters blog The Great Debate.