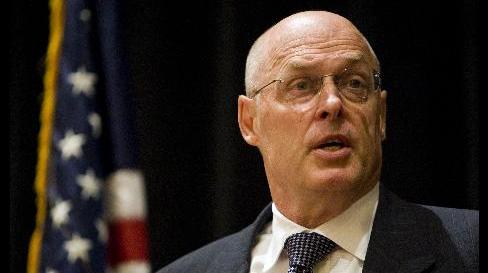 The cost of faltering American leadership is growing as quickly as you can say Bear Stearns.

And the stakes in the U.S. election campaign increase with every dismal twist of the economic cycle.

Much of what we are watching feels like an emerging-market meltdown to top international financiers: runaway debt, a declining currency, imploding markets, failing political leadership and the urgent need for outside intervention to provide emergency stability.

But don’t expect the International Monetary Fund to step in to impose discipline and provide stabilization. When you are the world’s strongest and biggest economy, you do that sort of thing for yourself.

And that’s where global investors have their doubts about American leadership. Those doubts weren’t eased by the sale of Bear Stearns Cos. for $2 a share to JPMorgan Chase & Co., plus $30 billion of Federal Reserve financing for its dodgier assets.

International financiers lack the confidence in Fed Chairman Ben Bernanke that they had in Alan Greenspan — though they add that Greenspan helped fuel the subprime crisis by not raising interest rates when he should have.

They complain that U.S. Treasury Secretary Hank Paulson failed last week as a strategic communicator. What irked them wasn’t only how little he said to reassure markets, but that he said he didn’t really understand the complex financial instruments designed to control risk. That gets noticed when it comes from a former Goldman Sachs Group Inc. boss now responsible for explaining just such things to the White House.

Most of all, they fault George W. Bush for having failed to realize that he has another Katrina on his hands, this time of a financial nature, for which private-sector solutions are useful but not sufficient to keep the levees in place. They believe he has to deploy greater government means to send a message to the financial world that he is drawing a line in the sand.

The details of such a plan are as important as how it is presented. It must include some form of what Democratic leaders are calling for in Congress: between $300 billion and $400 billion in federal guarantees for the refinancing of mortgages.

The Bush administration has objected to such bills, saying they would bail out speculators. Paulson last week opposed more government intervention in the mortgage market, saying “we are at the right spot” in terms of policy.

But until someone establishes a bottom for the mortgage mess and thus halts the flood of disclosures, it will be impossible to stabilize the financial system.

Just as important, global financiers want to see Bush get out in front by calling a high-visibility meeting of his Federal Reserve chief, his Treasury secretary and all the heads of the most-important financial institutions to discuss the crisis and announce a more determined government response. Yesterday, he met with the President’s Task Force on Financial Markets that consists of Paulson, Bernanke, Securities and Exchange Commission Chairman Christopher Cox and the acting chairman of the Commodity Futures Trading Commission, Walter Lukken.

Though he said “the United States is on top of the situation,” he left the door open to more government intervention. “When need be, we’ll act decisively,” he said.

As with the war in Afghanistan, the Iraqi war aftermath, the Hurricane Katrina disaster and current efforts at Mideast peace, investors are concerned that the president is responding too late and with inadequate understanding, resources and creativity.

With 10 months remaining in office for an exhausted administration, problems will probably deepen. Financial leaders doubt that any of the three candidates likely to succeed Bush offers the visionary American and world leadership needed.

For all of his experience on defense and security issues, John McCain has described himself as lacking economic expertise. The protectionist tilt of the Democratic election campaign — and behind it American society — worries global investors about the leadership prospects of either Hillary Clinton or Barack Obama.

“The current financial crisis in the U.S. is likely to be judged in retrospect as the most wrenching since the end of the Second World War,” Greenspan wrote in Monday’s Financial Times.

Some global financiers go further. They wonder whether Bear Stearns’s implosion, the collapse late last week of a $22 billion Carlyle Group investment fund, and the fall of everything from the Dow Jones Industrial Average to the dollar signal a broader U.S. decline. A loss of influence was happening anyway as other powers rose. Bush’s mistakes have accelerated the process.

There’s no schadenfreude in this for foreign financial leaders, for they realize that bad U.S. colds lead to global contagion. The U.S. still accounts for 25 percent of the world’s gross domestic product and a far larger percentage of its financial transactions. Its consumers spend $9 trillion a year, dwarfing the $1 trillion spent by the Chinese. China’s growth and hence its political stability depend, to some extent, on how deeply the mortgage mess hits U.S. consumption.

The question one hears with growing frequency is whether we are living through a brutal correction or a historic shift that will leave the global pecking order altered. The ritual reassurances always follow: that the U.S. is the irreplaceable global economic engine; that no country or currency can replace it or the dollar; and Americans have always proven resilient and world champions at self-correction.

One hears this mantra with less confidence these days, as the world waits for U.S. leadership.

Frederick Kempe is president and CEO of the Atlantic Council.  Originally published 18 March 2008 by  Bloomberg News. Reprinted with permission.