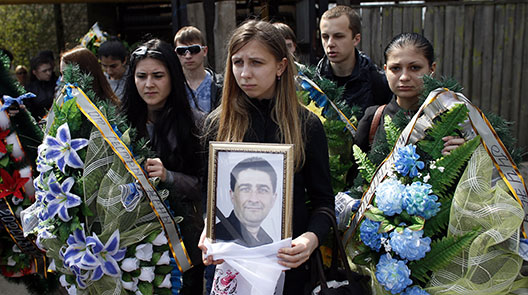 Relatives of Volodymyr Rybak, a city councilor in Horlivka, carry his picture at his funeral April 24, after he was abducted and killed in Ukraine’s Donetsk province. The Ukrainian state security agency said Russian military officers directing separatist uprisings in Donetsk had ordered Rybak’s killing after he opposed a separatist takeover in Horlivka. REUTERS/Marko Djurica

Once the Kremlin  seized and “annexed” Crimea in late March, it began a campaign designed at a minimum to destabilize Eastern Ukraine.  While we cannot know for sure what Mr. Putin’s maximalist goal is, it includes, at least, establishing an autonomous southeastern Ukraine sensitive to Moscow’s interests.

The Kremlin, however, badly miscalculated.  It acted as if it believed its own propaganda, pumped out by Russia’s state-dominated media, that the ethnic Russians and “cultural Russians” in Ukraine’s east and south were seriously unhappy about the departure of former President Viktor Yanukovych, and were under some kind of danger from nationalist Ukrainians running the country from Kyiv.

Had that been true, it would have been relatively easy for the Kremlin to send in some operatives and help the locals organize their own resistance to the interim government in Kyiv that Moscow absurdly labeled a fascist junta.

Since the people of the east failed to rise against Ukraine’s government, Moscow initiated an operation, led by its intelligence agencies and special forces, to spark an insurrection.  Whatever label we use for it – insurgency, irregular warfare or other – its clear features include the following:


Before going any further, we need to step back and talk about terrorism in general.  Starting at some point with the emergence of terrorism in the Middle East in the mid-to-late 1960’s, we have come to associate terrorism with groups that target entire peoples as a way to garner publicity for a specific cause and to express unhappiness with the policies of specific governments.

Of course, there is nothing wrong with this definition.  This is a specific type of terrorism and, you might say the most spectacular kind, especially after September 11.  But it is not the whole field of terrorism.

The use of much more discriminate terror – aimed to achieve more limited objectives than to publicize a cause or to impose some sort of presumed tribal vengeance – has been a feature of many insurgencies.

It was a common feature of the communist insurgencies that plagued the Third World in the 1950s and ’60s.  To take one example, the communist insurgency in Malaya.  It began with the murder of several estate managers.  Exemplary terror included the “execution” of Malays – in front of their families and fellow villagers – whom the insurgents accused of  providing support (often by simply performing  their economic functions) for the government.

By this standard, the Russian-led insurgency is practicing terror.  Let me provide some examples:

What is the purpose of this selective terror?

This is not the large-scale terrorism characteristic of Al Qaeda or Boko Haram or the Tamil Tigers. But it is terrorism.  Civilians are being arrested, “disappeared,” tortured, and murdered for political ends.

Why do we not see and hear these realities in the media coverage of Ukraine’s crisis?

First, while the Ukraine story has been a major one since the crisis began, most news media have set a standard of evidentiary rigor that makes common-sense reporting very difficult.

That’s why nearly all international media describe the insurgents in southeast Ukraine as “pro-Russian” forces or “separatists,” rather than “Russian-led”  forces. This persists to this day despite the following facts:

The reluctance of the media to tell the plain truth about the insurgency – instead offering a Russian version of events and then a Ukrainian or Western one – leads to even greater caution in connecting the dots on terror.

Still, this is overall a Kremlin project, including the use of directed terror. If the Russian government shut down the supply of fighters, equipment and money, this conflict would be over in a fortnight.

John  E. Herbst is a former U.S. ambassador to Ukraine and the director of the Dinu Patriciu Eurasia Center at the Atlantic Council.