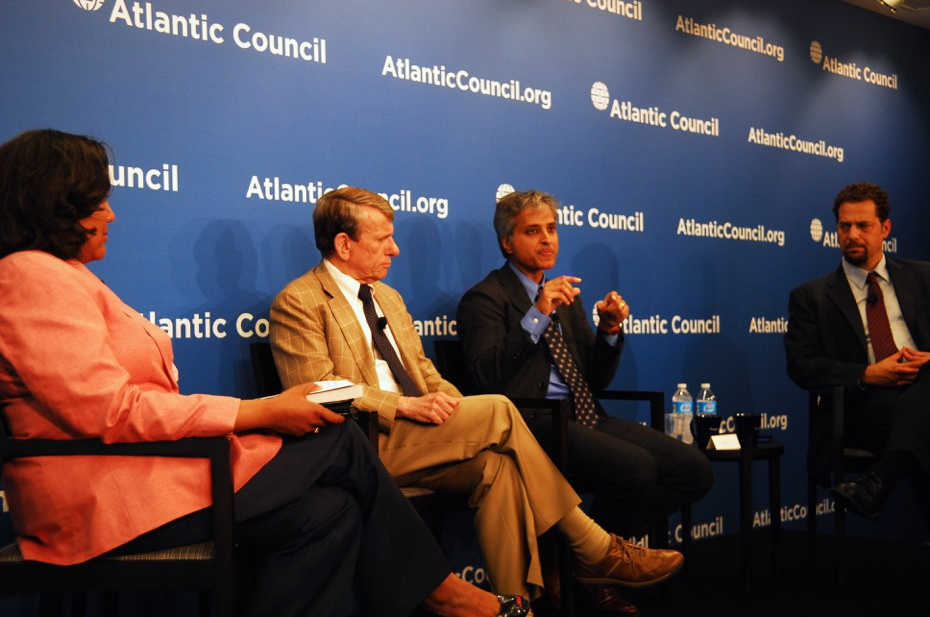 On May 11, the same day panelists converged at the Atlantic Council to debate the future of hydraulic fracking technology, news broke of a pessimistic report by the Organization of the Petroleum Exporting Countries (OPEC) predicting that oil prices would remain well below $100 per barrel for the next ten years—and that in the best-case scenario, a barrel of crude would cost only $76 in 2025.

Such a scenario has led to much hand-wringing in the US fracking business, the explosive growth of which over the last five years has produced today’s glut on the world oil market. Many say the industry has become a victim of its own success.

The Atlantic Council’s Global Energy Center brought together three panelists for a discussion titled “Can Fracking Survive? The Impact of Low Oil Prices and Prospects for International Expansion.”

Chandra, who has spent his career in the energy business, said that as a result of fracking—a process in which oil and gas deposits are blasted from shale rock deep underground—up to 1.5 million barrels of oil per day have been placed on the international market, driving down prices.

“Global forces allowed US oil to have a place in the world, and the world has made room for that,” said Chandra. Thanks to fracking, US oil production has jumped from about five million barrels a day in 2008 to nearly twice that much today. Daily production at North Dakota’s giant Bakken oil and gas field alone now exceeds one million barrels.

Yet the problem these days is weak demand and too much excess capacity, with current benchmark US prices at $59 per barrel. That’s up by 36 percent since March, but down 45 percent since June 2014, when violence in Iraq pushed prices up to $115 a barrel.

According to International Monetary Fund data cited by the Wall Street Journal, only two OPEC members—Kuwait and Qatar—can balance their budgets at $76 a barrel, while most members need prices to be well above $100 a barrel just to break even.

That will have a devastating impact in the Midwest as well as the Middle East, said Chandra, whose financial services firm has more than $220 billion of assets under management.

“A lot of land will be returned back to the leaseholders, not to be drilled again,” he said. “When your revenues are in as much flux as ours are, leverage will come out of the business. It’s like an earthquake. The fringe companies are already under huge stress, if not on the verge of bankruptcy, and the core is shrinking.”

Engelder, a leading authority on the Marcellus gas shale play—which stretches across parts of New York, Pennsylvania, Ohio, and West Virginia—said the fracking industry traces its explosive growth to policies pursued nearly forty years ago during the Carter administration.

“Uncle Sam is the father of fracking,” Engelder said. “Under the leadership of President Jimmy Carter, the Department of Energy initiated the Eastern Gas Shales Project and provided funds to scientists for the exclusive purpose of discovering how to tap the vast reserves of American gas shale.”

Yet fracking comes with its own environmental risks, warned Gold, who is perhaps best known for his coverage of the 2010 Deepwater Horizon oil spill in the Gulf of Mexico.

Gold’s book, The Boom: How Fracking Ignited the American Energy Revolution and Changed the World, was published in April 2014. The 384-page book looks at both the pros and cons of a radical technology first invented in 1947 but not widely exploited until the past decade.

Gold said he became interested in fracking technology shortly after joining the Wall Street Journal, where at the time he was writing about small oil and gas companies.

“One day I got a call from my parents, who own one hundred acres in north-central Pennsylvania. My mother said she had gotten a call from a company called Chesapeake which wanted to lease our land,” recalled the Texas-based journalist. “At that time, there was a little drilling going in on the Pittsburgh area, so I had to go back and start learning why Chesapeake was leasing land so far across Pennsylvania.”

“That got me to the second stage of fracking. Should we be doing this? How can you get the benefits of all this oil and gas while minimizing the risk?” he asked. “Those are very important questions, and I don’t think they’ve been answered yet. We’re still grappling with them.”

Authorities have recently blamed fracking for a series of small earthquakes in Texas and Oklahoma. According to the US Geological Survey, the Dallas area has experienced forty mini-quakes this year, with a magnitude 2.7 temblor detected in early May. The USGS said Dallas—which sits atop the massive Barnett Shale, with 30 trillion cubic feet of natural gas—recorded only one quake in the pre-fracking era between 1950 and 2008.

This, say experts, is one reason fracking has not expanded around the world. Argentina, China, Russia, and Venezuela all have shale oil deposits, though none of those countries have exploited those deposits on a commercial scale to the extent the United States has.

“China is said to have large gas shale deposits, but one was in a very arid region to the north, and the other was in an area with a population density of that of New Jersey,” said Gold. “So neither made sense to drill.”

Chandra said major oil companies need to “put a lot more effort” into understanding the geological formations already being exploited, since the quality of rock—even among samples drilled just a mile or two from each other—can vary dramatically.

“Before we make the same mistakes and go internationally, we really need to refine the science here,” he said, adding that “for the fracking industry to grow overseas, there needs to be incentives, but those incentives have to exist elsewhere, and I don’t think I see anything remotely paralleling what we have here anytime soon.”

What really made shale oil take off in the United States, said Gold, “was the fact you had companies going across Pennsylvania and Texas, handing out large checks of $10,000 to $25,000 an acre, plus an eighth of the royalties.”

Despite the recent downturn in prices, Russell said the fracking industry isn’t necessarily heading for a bust.

“We’re going to shrink a little, but one reason is that this is a really immature industry,” he concluded. “It’s just learning how to make bigger wells for less money, to drill more wells with fewer rigs. A lot of the shedding going on is just companies getting smarter. The era of rapid, relentless growth is clearly over. But I don’t see any signals that production is going to drop off.”