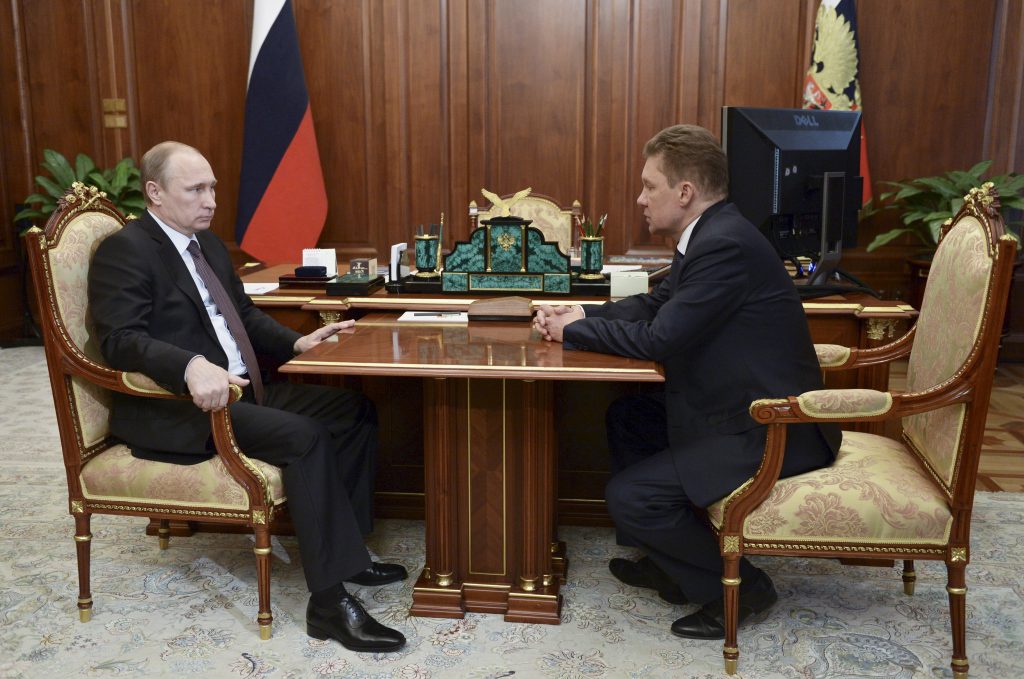 Despite an unceremonious end to the controversial South Stream mega-pipeline, Russia remains outspoken and determined in its effort to carve Ukraine entirely out of its European natural gas deliveries which accounted for 62 billion cubic meters (bcm) of Gazprom’s European-bound exports in 2014. Formally announced in 2007, South Stream had been the centerpiece of this effort. However, with its abandonment, the question becomes whether and when Russia’s state-owned Gazprom might accomplish such an ambitious objective, using alternative export pipelines and existing EU internal infrastructure. At first glance, it appears to be more rhetoric than reality.

According to a joint statement, the inter-governmental agreement (IGA) is expected in the second quarter of this year. The pipeline route, which was confirmed in February, will follow the old corridor of South Stream before veering south towards European Turkey and landing near the village of Kiyikoy, terminating in the area of Ipsila on the Turkish-Greek border. The first 15.75 bcm capacity line is expected to be on-line December 2016 and will be exclusively dedicated to the Turkish market at a 10.25 percent price discount.

Perhaps more provocative than the announced termination of South Stream was Miller’s subsequent message to Europe, that Gazprom would cease European-bound deliveries via Ukraine in three years, and that “it is up to them [Europe] to put in place the necessary infrastructure starting from the Turkish-Greek border.” This is a bit misleading from a commercial standpoint—the supplier and consumer are under contract after all, and Gazprom cannot simply maneuver unilaterally—yet it certainly puts pressure on the EU and the former consortium countries to respond.

With the major sticking points resolved, both sides’ intentions seem rationally aligned. Compared to South Stream, Turkish Stream is a shorter, less expensive project that avoids a confrontation with the EU Commission over competition rules (namely third-party access and state aid). Gazprom has already sunk $4.7 billion into planning and initial assembly for South Stream, which can largely be rolled over to Turkish Stream. Turkey would overtake Germany as the most important transit country for EU gas imports, allowing Ankara to realize its long-held ambition of becoming a major regional gas hub while earning transit fees and discounted prices from Gazprom.

Yet the idea of 50 bcm (of the full four-line 63 bcm proposal, some 14-15 bcm goes to the Turkish market) arriving on the Turkish-Greek border for disbursement in three years is improbable for at least two reasons. First, the only formal announcement thus far concerns the first line, which will meet Turkish consumption and replace volumes arriving via the Trans-Balkan line that is fed through Ukraine. Second, current interconnectivity within the Balkans and along its EU periphery is poor to non-existent and the prospect of advancing existing Projects of Common Interest (PCIs) and Projects of Energy Community Interest (PECIs) or other large-scale regional proposals are a medium-term consideration at best.

Many larger scale cross-border projects are typically delayed in the early stages due to political and financial complexities associated with longer time horizons (at least five years). Southeast European governments in particular have not been able to attract investment; a lack of distributional infrastructure underscores pervasively low demand in the energy mix, and these two conditions are mutually reinforcing. The financial crisis and lack of economic growth limits the availability of public funding and the appetite for loan guarantees amongst politicians, particularly when the payoff is so distant. While international financial institutions, European banks and European funds targeting infrastructure development are available, these are supplementary and conditional on government backing. Without the completion of Interconnector Turkey-Bulgaria (ITB, 3.1 bcm), the Ionian Adriatic Pipeline (IAP, 5.1 bcm), Interconnector Greece-Bulgaria (IGB, 2.8 bcm) and the Interconnector Bulgaria-Serbia (IBS, 1.7 bcm) it is difficult to imagine how any gas from Turkey can ultimately reach the wider European market. These projects are modest but would fulfill very basic integration needs and allow gas from Turkey to meet the low-level demand of the region from south to north. But beyond this, the capacities are not sufficient to serve as a transport linkage to central Europe and beyond.

To realistically deliver significant volumes from the Greek border a pan-European pipeline similar to Nabucco would need to be constructed. Such proposals are being encouraged by Gazprom and discussed in the region (e.g. Balkan Stream, EastRing), but the case for private financing is weak, particularly without PCI status, and it is inconceivable that such an undertaking could be completed before 2020.

Finally, Gazprom could decide to build compressors along the Trans-Balkan pipeline and enable reverse flow. However this and any new pipeline that would carry gas from Turkey would fall under Third Energy Package (TEP) regulation and/or the Energy Community’s corresponding energy acquis, which stipulates third-party access and the elimination of destination clauses. This means that the infrastructure would not be reserved exclusively for Russian gas, as it would have been with South Stream.

Meanwhile, the EU Commission has been encouraging implementation of PCIs to facilitate market development precisely to diversify from Russian gas, with a vision of connecting the Western Balkans to the Southern Corridor and eventually completing a North-South corridor from the Baltic to the Aegean Sea. Since 2009, a number of Central and Southeast Europe expansions and reverse flows have been realized under the European Energy Programme for Recovery (EEPR), with the Interconnector HU-SK expected to be commissioned in late 2015. Certainly these small-scale upgrades have improved the EU’s energy security and resiliency—a fact that became apparent during the 2014 Ukraine supply disruption.

It seems that for now and perhaps inevitably these developments are doing more to help Gazprom further marginalize Ukraine by way of its alternative export lines, principally through Nord Stream where volumes increased by 10 bcm from 2013 to 2014 with 32 percent of capacity still unused. The improved west-to-east infrastructure allows Nord Stream volumes to connect with EU customers, some of which even circles all the way back to Ukraine (which can now technically receive up to 60 percent of its demand from Europe) as demonstrated at the end of 2014 during the peak of the crisis. Such rerouting through longer, indirect transmission highways—especially the undertaking of Turkish Stream—is commercially nonsensical but follows the logic of Russia’s geopolitical aims.

The backdrop to all of these pipeline considerations are existing long-term contracts which, outside of Hungary and Lithuania, do not expire until the mid to late 2020s. These contracts not only specify the pricing mechanism and volumes that have been in the news so frequently, but identify the point of delivery. For example, Hungary’s contract stipulates delivery at Beregdaróc on the Ukrainian border. Usually the built-in contractual review process takes place every three years, and presumably to change delivery points both sides would need to agree to it in such a format. With the EU focused on assisting Ukraine and adopting a more tightly knit energy union, it will be interesting to see how these bilateral negotiations are handled in Brussels.

While Turkish Stream feels like a visceral face-saving response to the demise of South Stream, it reflects Russia’s unrelenting insistence on isolating Ukraine and ultimately maintaining a sphere of influence without affecting its commercial relationship with Europe. Somewhat ironically, the physical integration of Central and Southeast Europe also enables rerouted gas of Russian origin to circumvent Ukraine and reach European customers. The development is, of course, positive for regional energy security, as proven last year when supplies to Ukraine were cut-off for an extended period, but diversification is another story. Regardless, Gazprom’s ability to fully displace Ukraine transshipments are limited by existing infrastructure capacity and contractual obligations, and doing so would require at least two lines of Turkish Stream to be built alongside significant infrastructure upgrades in Southeast Europe. While the former seems to be on track with strongly aligned interests, the latter remains questionable. In other words, it’s likely that a sizeable portion of gas deliveries will continue to transit Ukraine well into the next decade.

Nolan Theisen is an energy analyst at the Regional Centre for Energy Policy Research (REKK) in Budapest, Hungary. He was a delegate at the Atlantic Council’s Energy and Economic Summit in Istanbul in 2014.