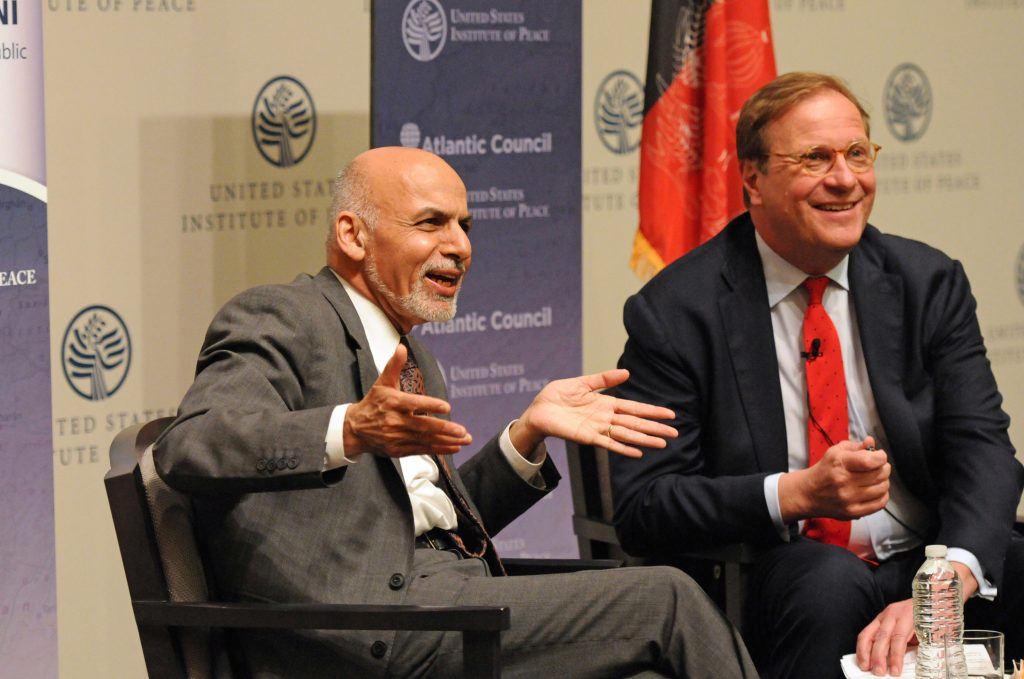 Afghan leader ‘cautiously optimistic’ about prospects of reconciliation as Pakistan, China pitch in

Afghan President Ashraf Ghani is “cautiously optimistic” about the prospects of peace with the Taliban, in part because Pakistan—where a mélange of terrorist groups have for years found safe haven and support—now acknowledges that improving ties with neighboring Afghanistan is key to ending regional violence.

“The problem, fundamentally, is not about peace with the Taliban [but] about peace between Pakistan and Afghanistan,” said Ghani, adding that Pakistani officials have “accepted this definition of the problem. That’s the breakthrough.”

Ghani made his comments in a March 25 conversation moderated by Atlantic Council President and CEO Frederick Kempe at the United States Institute of Peace. The two organizations co-hosted the event during Ghani’s visit to Washington.

Ghani warned that a “new ecology of terrorism” poses a threat to South and Central Asia as well as China.

Since taking office six months ago, Ghani’s government has sought to breathe life into an on-again, off-again peace process with the Taliban. This effort got a shot in the arm from an offer of support from China, a key ally of Pakistan. Elements of Pakistan’s security sector, particularly its Inter-Services Intelligence (ISI) agency, support a broad range of terrorist groups, some of which operate in Afghanistan.

“Today, there is a broad consensus among our neighbors, from India to Azerbaijan and beyond, that a stable Afghanistan is essential to stability in the region. This is an important consensus,” said Ghani.

Ghani insisted that the reconciliation effort with the Taliban must be an Afghan-led and Afghan-owned process.

The United States remains an “indispensible interlocutor” in the effort to reconcile with the Taliban, but “Afghan ownership and management of the peace process is an indispensible precondition,” he said.

Ghani said the onus is on the Taliban to break away from al-Qaeda.

Echoing that sentiment in remarks to a joint session of Congress earlier in the day, the Afghan leader said: “The Taliban need to choose not to be al-Qaeda, and be Afghan.”

The peace process has been complicated by the emergence of elements affiliated with the Islamic State in Iraq and al-Sham (ISIS).

“If al-Qaeda was Windows 1… Daesh is Windows 5,” he said, referring to ISIS by its Arabic acronym.

Even as the Afghan government pursues reconciliation efforts with the Taliban, it is bracing for a spring offensive by the militants.

It is with this threat in mind that Ghani had urged US President Barack Obama to show some flexibility on a timeline to withdraw American troops from Afghanistan. Obama acceded to that request and this week announced he would leave 9,800 US troops in Afghanistan until the end of the year. He had earlier planned to leave only 5,600 troops in Afghanistan by year’s end.

Obama, who came to office promising to end the US role in the wars in Afghanistan and Iraq, said he had decided to slow down the pace of withdrawal of US troops “because we want to make sure that we’re doing everything we can to help Afghan security forces succeed so we don’t have to go back, so we don’t have to respond in an emergency because terrorist activities are being launched out of Afghanistan.”

Obama said his administration would work with Congress to ensure funding to sustain 352,000 Afghan police officers and troops through 2017.

In his remarks at USIP, Ghani said he was “very gratified” by Obama’s decision on troop numbers.

“We lost about eight months of planning during 2014 because the Bilateral Security Agreement” with the United States was not signed by former Afghan President Hamid Karzai, said Ghani.

When he came to office, Ghani promptly signed the agreement, which allows US and NATO troops to remain in Afghanistan as advisers and counterterrorism specialists after all combat forces withdraw. The United States will continue to train, advise, and assist Afghan security forces. US troops will take part in some counterterrorism operations.

Looking ahead to a scenario in which his country achieves peace with the Taliban, Ghani said the Afghan government would then have to cope with the problem of refugees created by years of conflict. Many Afghan refugees live in camps across the border in Pakistan.

Ghani emphasized the importance of stability in Afghanistan, which he said was key to Asia realizing its potential to becoming the world’s largest continental economy.

“Asia cannot be integrated without a stable Afghanistan. We are not just metaphorically the heart of Asia. Without us being stable, there will be not a single pipeline taking gas from Central Asia to Pakistan or India,” he said. “So our location that was a key disadvantage, in the next fifty years is going to become solid gold.”

Ghani’s first visit to the United States as President of Afghanistan included meetings with Obama, Secretary of State John F. Kerry, and Defense Secretary Ash Carter. He also had the rare honor of addressing a joint session of Congress on March 25.

Ghani, a former World Bank economist who studied at Columbia University, has used his visit to underscore his deep, personal bonds with the United States and express gratitude for its people’s sacrifices of blood and treasure since the US invasion of Afghanistan following the terrorist attacks on September 11, 2001.

In the 13 years since, more than 2,300 US troops have been killed and nearly 20,000 wounded. The war has cost US taxpayers close to $1 trillion, according to published sources.

Standing alongside Obama at the White House on March 24, the Afghan leader thanked “the American taxpayer for his and her hard-earned dollars that have enabled us.”

Ghani’s warm relationship with Obama is in stark contrast with the frosty ties Karzai shared with Washington in his final months in office.

Afghan CEO Abdullah Abdullah, Ghani’s former election rival and current partner in government, joined the Afghan President on his trip to the United States. Both Ghani and Abdullah are former ministers in the Karzai government.

In his public remarks in Washington, Ghani emphasized his government’s commitment to combat corruption, uphold the rule of law, strengthen democratic institutions, and educate girls.

“It is our responsibility to get our house in order,” he said.

Former Secretary of State Madeleine K. Albright, an Honorary Director of the Atlantic Council’s board whom Ghani acknowledged as a mentor, presented the award.

Albright recalled her initial impression of Ghani as “a brilliant economist, a provocative thinker, and a compelling international figure.”

Ghani has devoted his energy to rebuilding Afghanistan’s relations with its partners, refocusing the international attention on his country’s future, and providing the world community “confidence that Afghanistan’s government is committed to the rule of law and protecting the rights of its people—including Afghan women,” said Albright.

“What President Ghani has done in less than six months is transformative,” she added.

Kempe said Ghani had “demonstrated unusual courage, integrity, and vision throughout his years of service to Afghanistan.”

“He epitomizes what we endeavor to recognize with this award, both for what he has already achieved and to encourage what he yet envisions for his country against all obstacles,” he added.

The award ceremony was part of the Atlantic Council’s annual Distinguished Leadership Awards to be held on April 30.

Image: “It is our responsibility to get our house in order,” Afghan President Ashraf Ghani said at an event co-sponsored by the Atlantic Council and the United States Institute of Peace on March 25. Atlantic Council President and CEO Frederick Kempe (right) moderated the discussion. (Photo courtesy of USIP)