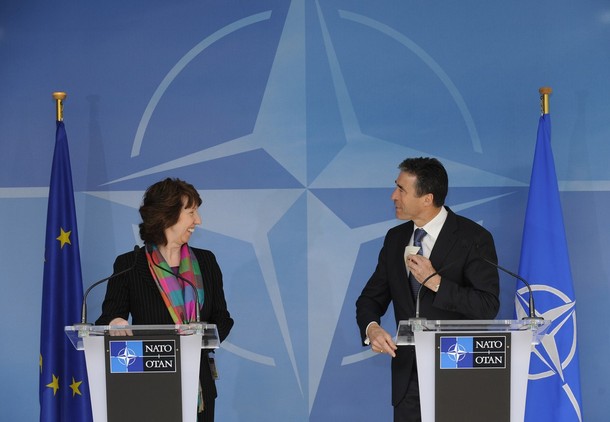 Sarwar Kashmeri, Senior Fellow with the Atlantic Council’s International Security Program, was interviewed by Vermont Public Radio about NATO, its future, and how it could be saved by allying with the EU’s Common Security and Defense Policy.

You can listen to the interview using the audio player below, or read the transcript that follows.

(HOST) Commentator Sarwar Kashmeri is Senior Fellow of the Atlantic Council’s Security Program and a resident of Reading.  He has been contemplating the future of NATO for his book on the alliance, due out later this year.

(KASHMERI) The North Atlantic Treaty Organization was set up in 1949 to fight the Soviet Union.  Today it is increasingly dysfunctional, still searching for a new role two decades after the end of the Cold War.  Left in this state, NATO may soon become irrelevant to the security needs of the Euro-Atlantic area.

Cohesion used to be NATO’s hallmark, but there’s little of it left.  The Eastern and Central European members want NATO to act more aggressively against Russia, while the United States, Canada, and the Western Europeans no longer consider Russia a threat.  Many of America’s largest NATO allies refuse to fight in Afghanistan and are even unable to find a few hundred trainers for that war.  And you may recall, NATO refused to support America’s invasion of Iraq.

Can NATO be saved?  Here’s my two cents:

I believe the salvation for NATO’s woes is to bridge the alliance with the European Union’s Common Security and Defense Policy, or CSDP.

If, like many others, you believe that Europeans have been transformed into pacifists, ponder this one: In its 10 years of existence, CSDP has already been used to deploy 27 missions, from Africa to Asia.  Two years ago the EU sent an 11,000-troop mission into the heart of Africa.  The mission was deployed to protect 400,000 refugees in Chad and the Central African Republic.  27 European countries and even Russia joined together under CSDP command to execute the operation that ranged over 100,000 square miles, an area 10 times the size of Vermont.

After a 19-month campaign, including numerous fire-fights and deaths in combat, the mission was successful and turned over command to the United Nations, a far different outcome than appears likely for NATO in Afghanistan.

The EU is a governmental entity, so it can combine civilian, police, legal, and military resources to tailor missions that are far better suited to winning hearts and minds than NATO, which is strictly a military organization.  EU missions overcome the objections some countries have to American-led NATO forces on their territory.  Finally, CSDP is European owned and operated; it is Europeans making decisions in Europe’s national interests.

In contrast, NATO has an outstanding military command and control structure that the Alliance has perfected over its 60 year life-span.  But it is a structurre in need of a mission – and an asset that CSDP will surely need as it expands its role.

So let’s bridge the two organizations.  NATO will get a new lease on life; and a bridged military alliance will at least ensure that the transatlantic allies remain connected for the times when Europe, America, and Canada wish to act together.

It would be a pity to let NATO fade away, because we may then have to re-invent it someday.  And that will not be easy.

Sarwar A. Kashmeri is senior fellow with the Atlantic Council’s International Security Program.  He is a strategic communications advisor to international companies, a business columnist and an author; he is recognized on both sides of the Atlantic as a specialist and commentator on U.S.-European relations. Kashmeri’s latest book, NATO 2.0: Reboot or Delete? will be released by Potomac Books in January 2011. Photo credit: Getty Images.